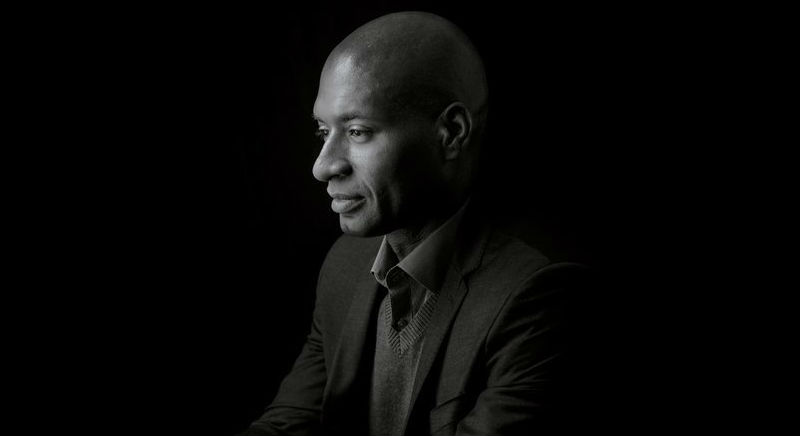 "A free, fearless, adversarial, in-your-face press is the best friend a democracy can have," said Charles Blow at U-M on Friday. Photo by Chad Batka for The New York Times.

Reading a long list of sponsors doesn’t usually prompt a standing ovation; but because celebrated New York Times op-ed columnist Charles M. Blow couldn’t hear, while backstage at Rackham Auditorium on Friday evening, what was being said while waiting to make his entrance, he gamely emerged before his official introduction had even gotten underway.

Not that the adoring, full-capacity crowd minded the miscue in the least. Presenting the keynote speech of a Humility in the Age of Self-Promotion Colloquium at U-M, Blow spoke for 40 minutes on the topic of Trump, arrogance, and democracy, and answered audience questions for an additional half hour.

Though some in the crowd strained to hear Blow -- whose tall, lanky frame kept him farther-than-usual from the lectern’s microphone -- his insights on the President, the election, the media, and race regularly drew nods and murmurs of agreement, as well as applause.

“Donald Trump doesn’t let facts slow him down,” said Blow, quoting a passage from Trump’s 1987 book, The Art of the Deal, that read, “People want to believe that something is the biggest and the greatest and the most spectacular. I call this truthful hyperbole.” Socially, or in business, Blow noted, this practice may simply operate as an exaggeration. “But in politics, that’s called propaganda, and it’s not so innocent,” said Blow.

Blow laid out three reasons why Trump’s lies take some hold, even in the face of fact-checking: first, unlike small lies, which we’re accustomed to detecting, big lies flummox us in their audacity, to such an extent that our brain “searches for truth in the lie”; second, the sheer volume of lies, or “cognitive load,” is so overwhelming that our brains “go into overdrive” and they “can only do so much of that work before the brain gives up and gets exhausted”; and third, that Trump’s presentation of himself as a projector of lies, rather than the producer of them (by saying “someone told me,” “I heard,” “people are saying,” etc.) sets up a situation where if something is proven to be untrue, he can claim a kind of innocence. “It’s a shield that prevents him from ever being blamed for the lies in which he traffics,” said Blow.

Blow also discussed Frederick Douglass’ complicated relationship with Abraham Lincoln, which began in antagonism but ended in friendship; highlighted Trump’s particular venom for racial, ethnic, and religious minorities, as well as for women (“And there are some people who can do not enough wrong. You have a tiki torch? You’re OK”); and offered a harsh critique of the press’ role in last year’s election: “An irresponsible media built an awful equivalency in which the choice between Clinton and Trump seemed to be equally bad. The media framed the election as the choice between a liar and a loon. But this obscured the fact that the loon was a pathological liar, and a liar of a kind and quality we have not seen in recent presidential politics, and perhaps ever. This makes the media, which takes as its mission the discovery or exposure of truth, a natural adversary for Trump, or it should be. But even so, the media did not always live up to its ideals during the election. In fact, I’d suggest that the media was guilty of malpractice.”

Even so, Blow reinforced the idea that “a free, fearless, adversarial, in-your-face press is the best friend a democracy can have,” and expressed concern that Trump’s promise to “open up libel laws” against members of the press was a grave threat to the First Amendment. “The durability of our democracy is not destined,” said Blow. “It is not impervious to harm or destruction. America’s a very young experiment in the history of the world. ... We are all engaged in a battle to protect fact and science and history. It is a battle to maintain the value of truth because, in the end, truth must win.”

Following Blow’s prepared talk, audience members posed questions, including one about consumers’ desire for opinion-driven news, as opposed to neutral reporting (“I think we’ve got to a point where we want more ammunition than information,” said Blow), and another about Blow’s reaction to figures like John McCain, George W. Bush, Barack Obama, and Bob Corker recently speaking out in barely veiled terms against Trump.

“Number one, Donald Trump has a name,” said Blow. “Use it. He’s not Voldemort in Harry Potter. You can say his name. Number two, all the people you mentioned are not going to run for office again. I want somebody who has some skin in the game, who’s still up for election, to put themselves on the line.”

Regarding police shootings of unarmed black men, Blow said, “The reason that none of those officers were ever convicted is because what they were doing was legal. We have decided, and the courts have confirmed in this country, that the only defense you need to make is that you were afraid. It is not the taking of the life, but how you felt when you took it. ... So you have to change the law in order to save your life. That means you have to change the people who make the laws. That means you have to go out and vote. That means that voting becomes the most radical thing you can do.”

One audience member asked if fact-checking by various outlets seemed to make any appreciable difference. “The problem is, number one, we still treat fact-checking like its cute and funny,” said Blow. “So we still have Pinocchios. ‘This gets four Pinocchios.’ It’s not cute. Why are we treating it that way? Why do we have pants on fire? ... Our optics around fact-checking is that this is a cute thing the kids might like. We laugh at them. We have to stop that. We have to treat lying like a serious thing. ... The media is rebuilding the plane while it’s in the air, trying to figure out how to fix this thing, how to adjust to a new reality where this is who (Trump) is, and how do we deal with him, but also more importantly, how do we deal with the next one? And I don’t think we have an answer to that yet.”

When someone asked Blow about Sanders’ supporters refusing to shift their support to Clinton, Blow said, “Every time someone makes the silly decision that you don’t want to reward someone with your vote because they don’t satisfy -- don’t check all your boxes, you are punishing yourself by not participating and being part of the decision about who is going to control your life. It is the most asinine decision you can make.”

Finally, the last question of the night concerned what Blow had learned about Trump’s die-hard supporters. “I didn’t have to learn. I’ve known these people my whole life,” said Blow. “There’s a lot of exploitation of fears happening. ... Anxiety about some of it, yes, it’s economic, but everybody has economic anxiety. ... That doesn’t mean they vote for a demagogue. That’s a choice you make. You actually had 17 choices. You chose that one. So that means that there’s cultural ethnocentric anxiety, about the changing demography of the country; and there’s an anxiety about the passing away of a particular privilege and pact that some people have in this country. That no matter what, as long as they worked hard, they were guaranteed the advantages. Because some people in America have never had that experience. There was never a guarantee. You work hard because you wanted the best shot at it, but it didn’t guar success. And this is a very old pact that America made with some of its citizens to the exclusion of others.”

Blow talked about a speech Martin Luther King delivered, in which he talked about how, “at the very same time that America was refusing to give negros any land, by an act of Congress, it was giving away millions of acres of land in the West and in the Northwest. And not only that, it set up land-grant colleges to teach them how to farm, with government land. They had county agents to make them better farmers through government money. They gave them low-interest loans so they could mechanize those farms. They set up subsidies so they wouldn’t have to farm. King says, maybe America was willing to underwrite and undergird its white peasants from Europe at the very same time it was saying to the negro, you couldn’t have land. And it was these same people who say to black people, ‘You should pull yourself up by your bootstraps.’ America made a deal with certain people, and with the passing away of the guarantees of those deals comes a certain anxiety. ... People don’t think about it globally like that. They don’t think about it historically like that. They just know they feel a particular unease right now. They don’t necessarily attach it to racial and cultural anxiety.”