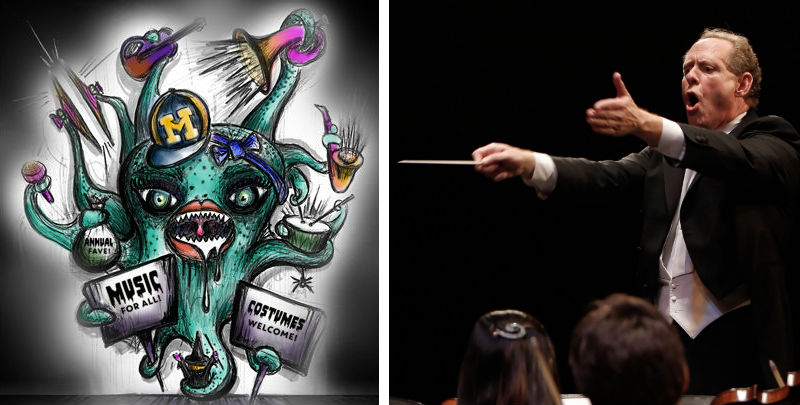 Conductor Kenneth Kiesler will direct a bunch of li'l monsters -- and maybe a banana-clad cellist -- at U-M's annual Halloween concert.

Sunday’s 40th annual Halloween concert at Hill Auditorium -- which combines the Campus Symphony Orchestra with the Campus Philharmonia Orchestra -- will mark conductor Kenneth Kiesler’s 23rd time on the podium while in costume. (What he’ll be dressed in this year is under wraps.)

But what you might not know is that he and the student musicians get one chance each year to raid the theater department’s costumes.

“They have a huge warehouse,” said Kiesler. “You could get just about anything you want.”

One legendary U-M Halloween concert costume, apparently, involved conductor Richard Rosenberg who, in the late '80s, dressed as a bat and directed a selection from Strauss’ Die Fledermaus while -- you guessed it -- suspended upside down.

Believe it or not, some in Sunday’s audience may be able to provide a first-hand account.

The hour-long, family-friendly, holiday-appropriate program offers up fun, familiar classics played well by orchestra members performing in costume, such as a ghost-busting cellist or a tricorn-toting pirate, as Kiesler did in 2012. The audience is encouraged to wear costumes, too.

“It’s a kind of greatest hits of classical music,” said Kiesler, who noted that while the concert’s first and last song are always the same each year, the rest of program changes. This year’s roster includes Shostakovish’s “Festive Overture,” Debussy’s “La mer,” Respighi’s “Pines of Rome,” Mussorgsky’s “Night on Bald Mountain,” Tchaikovsky’s “Sleeping Beauty Waltz,” and Wagner’s “Ride of the Valkyries.”

The tune that always opens the concert each year, though, is Adam Glaser’s “March of the Little Goblins,” which Glaser wrote as a conducting student at U-M. The tune premiered in 1997, “when the piece we used to play got to be too expensive, in terms of the rental,” said Kiesling. “('Goblins') is terrific. It’s zany, funny -- just a perfect start for a concert like this.”

And even though the concert’s traditional (but more poppy) encore isn’t listed in the program, “the audience knows,” said Kiesler. “I can say, 'What are we playing?' and they’ll yell it out.”

But that’s what happens when a concert has more than 40 years of campus and community tradition behind it.