I hadn’t fully understood the extent of this until I poked around online to get myself in the mood to attend her Oct. 25 talk at Hill Auditorium about her newest book, What Happened. I made the mistake of searching #hillaryclinton on Twitter. I almost injured my jaw as my mouth hung open while I glanced at the results.

The day before the event, I received a voicemail message from Ticketmaster letting me know that I should plan to be very early to the event. However, that voicemail message didn’t say “large” cameras were prohibited. So, when I got to the door of Hill Auditorium, I was turned away and had to skulk back to my car and stash my camera. Returning, approaching the auditorium again, I heard the song “God Bless America” in the distance. Briefly, I wondered if the UM Glee Club was providing entertainment nearby. I quickened my pace across the Diag to find that the sound was coming from an audaciously decorated pro-Trump truck and trailer that slowly drove around Hill Auditorium. As I ran to snap a photo of it, I looked directly into the face of another man who drove slowly with his window down. He aimed his camera at Hill Auditorium while yelling that no one was there, the auditorium was empty and that no one wanted to hear what Clinton had to say, all while staring directly into my face.

That was a few uncomfortable seconds of piercing eye contact.

I jogged toward the Hill Auditorium stairs.

The gentleman was incorrect. 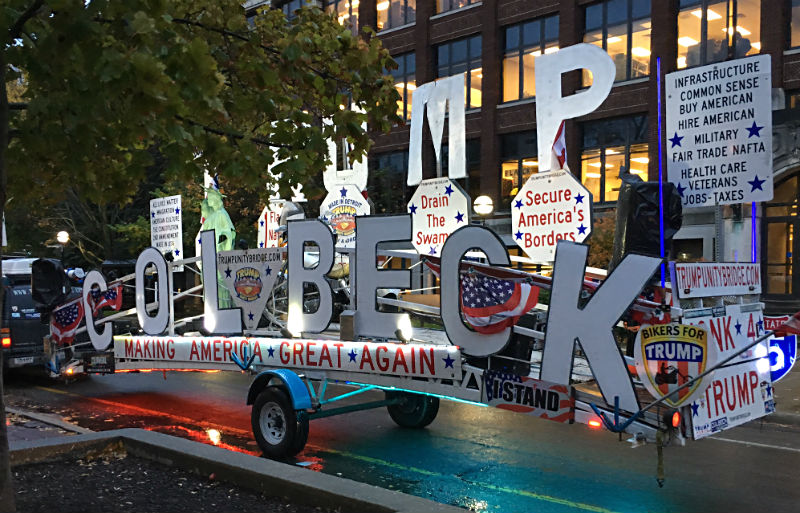 Inside, there were plenty of people eager to hear former Secretary of State, Senator, and First Lady Hillary Clinton. Exactly as I had expected, I saw mostly middle-aged to Hillary Clinton-aged white women in the crowd. I scanned this collection of baby boomers in sweaters mesmerized by their smartphones. The auditorium smelled exactly as I expected it would, too. It smelled like those moments when you go into a shopping mall thinking, “I’m almost 40, is it time for me to start dressing more professionally? At what age do you have to start shopping at Talbots?” You slow down as you pass the stores that have the more professional clothes, and a perfumery scent comes toward you. This is the smell. This, with a touch of peppermint candy.

I decided to relax in my Old Navy jeans and vest. I decided to ignore my soaking wet Chuck Taylors and was glad that I had brought my AADL library-branded sweatshirt. I had decided not to focus on feeling a little out of place as I watched the woman in front of me squirt something into her eye.

I had read that Clinton’s book points the finger at many when discussing her unsuccessful bid for the presidency. But very early in the book, on page xii, she says, “I couldn’t get the job done, and I’ll have to live with that for the rest of my life.” Trained in history, I was taught never to skip the prologue as it gives you an idea where a book is going, what arguments it will make. It tells you about the tone.

Earlier in the afternoon, I picked my son up from school, reminding him that I was going to listen to Hillary Clinton speak that evening. He made a joke about her emails. I repeat: He made a joke about her emails. It hadn’t occurred to me that this was something that the email issue had so thoroughly penetrated the culture that middle school kids made quick jokes about it.

University of Michigan’s Anne Curzan, an English professor with appointments in the Department of Linguistics and the School of Education, moderated the talk. As she introduced the speaker, I wondered how people decide whether to introduce her as “Hillary Clinton” or “Hillary Rodham Clinton.” What kind of choice is this? Is it personal? Is it for accuracy? Is it a political choice?

Hillary Clinton talked about Michigan, the special moments that she had had there throughout her campaign. She also told the audience that President Obama had told her that he had had an amazing campaign stop in Ann Arbor. She also gave a “special shout out” to the Ann Arbor branch of the Hillary Clinton fan club, which started in the early '90s; at one point, the local chapter was the largest nationwide.

(Inside thought: I will never stop being amused when I hear middle-aged to old white people say “shout out.” It makes me giggle every time. I enjoy it. I will not be ashamed. It also reminds me that language and culture have permeable borders. This seems important.)

Onstage, as Clinton warmed up the audience, she said that everyone gets knocked down. Then, she joked about her injury, citing a combination of walking in heels, carrying a coffee, holding a conversation, and descending stairs. The meme about everyone having the same 24 hours as Beyoncé pops into my head. I wondered if anyone ever says that about Hillary Clinton.

I also wondered how much we project onto Hillary Clinton. I wonder if this hydrant spray of projection contributes to her divisiveness, what makes her the flint for so many fires. I’ve seen many people online talk about what they hope Clinton does next. She is 70 years old. I hope she has a sumptuous pair of sweatpants that is just as soft and warm as she desires. I hope she is enjoying her favorite wine by the goblet while she simultaneously watches a favorite show and eating popcorn. I want for anyone her age who has worked so hard for her goals for so long to enjoy herself. Perhaps all this is something I'm projecting on her. Feelings.

Stacks of What Happened await the author's signature as the crowd waits to enter Hill Auditorium to hear Hillary Clinton. Photos by Sherlonya Turner.

Secretary Clinton said she has been enjoying herself in part by reading mystery novels, books where everything is wrapped up neatly and the ending is positive. She’s been watching HGTV, hanging out with her dogs, and doing yoga. She’s even experimented with alternate nostril breathing yoga. These are very human things. I wondered if whether she wants to share that information with us, or whether this is another act of service. Is she answering her fans’ plaintive questions? What do you do for self-care? How do you move on? How are you going to continue to inspire? You will continue to inspire, won’t you?

Clinton spoke on the role of sexism in American politics. Again, the audience erupted into applause. I noticed a particularly firm and slow clap to my left. Clinton made reference to studies that show likability and success go hand-in-hand in men's minds. The more successful a man is, she states, the more likable he becomes. But the inverse is true for women: “Maybe some of you in this room have an inkling about what I’m discussing.” This is a woman who knows just how to speak to the night’s audience.

“There is no such thing as an alternative fact.” --Hillary Clinton

Clinton spent a considerable portion of the evening talking about Russian interference in the 2016 election and suggested that part of the reason that their “disinformation campaign” was so effective was that the public has become somewhat desensitized from hearing things that aren’t true, such as when "leaders deny things that we can see with our own eyes ... like the size of a crowd at an inauguration." She says that it is essential to stand up for facts, to demand truth. Then, she continued, describing Russian interference in the election, “This is a new kind of Cold War and it’s just getting started.”

“Watergate, for those who can remember it was a physical burglary.” --Hillary Clinton

“I don’t want to insult John Podesta, but his emails were very boring.” --Hillary Clinton

Sharing the stage with a linguist, Clinton asked us to think about language. For example, she suggested calling something “hacking” minimizes that something was stolen, pointing out that the Watergate burglary of materials from the Democratic National Convention in order to influence a presidential election was met with outrage. But the Podesta emails, stolen from Hillary Clinton’s presidential campaign chairman and leaked in order to influence the outcome of a presidential election, was not met with the same sort of outrage.

When asked about developing the tough skin required for public life and what advice she offered women interested in politics, Clinton asserted there is a price to pay for this lifestyle and that she makes it a priority to point this out to young women. She says there just aren’t enough women in politics, continuing, “We will know we have equality when a mediocre woman gets a job just like a mediocre man." (This immediately made me think of the dentist joke that Chris Rock told in Kill the Messenger.)

She also warned women, “Not everyone will like your hair.” She encouraged them to keep their sense of humor and to develop the confidence to stand up for themselves, to take criticism seriously, but not personally.

She talked about the embedded pictures that we have about what presidents look like. This statement struck me particularly hard. I am intensely interested in the presidents of the United States. Back in 2008 and again in 2012, I joked with family and friends that I didn’t know what a female president would do to my obsession. Clinton made me think about this. Is this evidence of internalized misogyny? Or is it an aversion to potentially being asked to pick apart another woman? Neither? Both? I'm interested in the presidents of the United States as human beings, but I may be less interested in bearing witness to what happens to a powerful, public-serving woman human being.

Hillary Clinton also pulled back the curtain a bit on what it is like to be a candidate, how one is handled as a candidate “You think you know who you are and what you stand for,” she said, then comes the advice on how to package yourself in order to meet your goals. “We already edit ourselves!” The modern campaign forces more editing upon you. “Then, of course, there’s the makeover issue,” Clinton said. They strip you down and rebuild you.

Question: What would you tell your 22-year-old self?
Clinton: You have no idea what’s going to happen to you. Personally. Professionally. Hang on for the ride.

Moving forward, Clinton thinks that people must focus on improving parts of the electoral system that will have the most impact, and that voter suppression and gerrymandering are major problems that threaten our democracy. On a more individual level, she thinks people should focus on voter registration, voter turnout, and protecting the vote.

The night ended with another future-facing question when she was asked about her grandchildren: “Being a grandparent is the only experience in life that isn’t overrated.”

There are those feelings again.