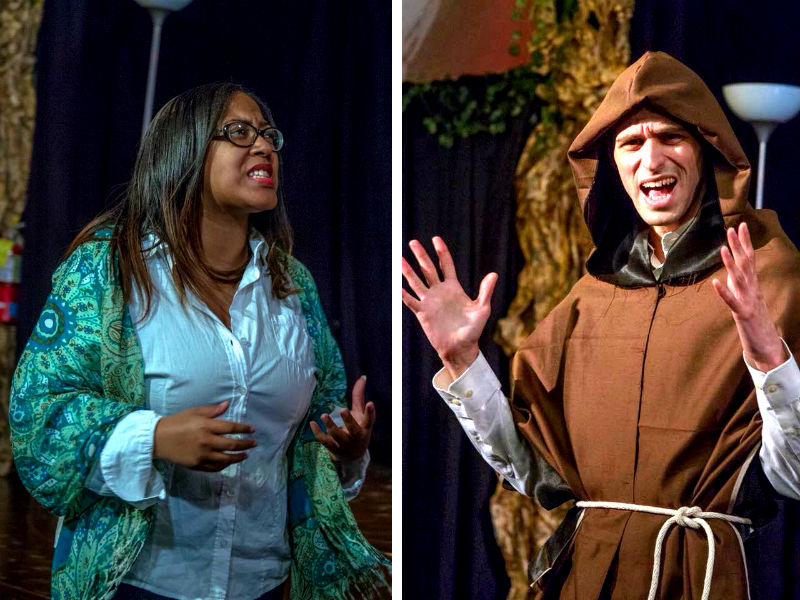 Nearly every play that is performed for an audience is a culmination of many people’s collective time and effort. A play is often a culmination of countless hours of rehearsals; of actors having learned the basics of their blocking and memorizing their lines, only to then attempt the feat of embodying becoming other people; of a director grappling with ideas and how to bring their artistic vision to a stage.

But rarely is a play a culmination of almost 10 months of other workshops and productions. Measure for Measure, a Brass Tacks Ensemble show that runs Nov. 10-19, is precisely that.

The Brass Tacks Ensemble troupe has been working on basic text and acting techniques of Shakespearean drama since January. They started with Much Ado About Nothing (performed in April) followed by The Merchant of Venice (performed in August), and they are now tackling an incredibly dense and challenging piece.

“This troupe has an ease with the material, with acting, and with each other that I have not encountered in any production I've ever directed,” says James Ingagiola, who also helmed both of the other Shakespearean productions for BTE earlier this year. “We were really able to hit the ground running when rehearsals began and explore some of the harder elements of this play.”

And Measure for Measure is a really hard play. Often called a "problem play," this is one of Shakespeare’s final comedies, which explores preoccupations with death, questions of morality, and some questionable and ethically ambiguous plot devices.

“Our production of Measure for Measure focuses on the extremes of human morality: How far will you go to remain true to the ideals and the principles that you set for yourself?" says Ingagiola. “Do we follow the rules of our governments, our religions, our occupations to the letter, or is there room to maneuver if our consciences come into conflict with those rules?”

“What appealed to me about Measure for Measure,” Ingagiola adds, “is the conflict of the two extremes -- an absolute morality where the law is the law and rules are rules versus a more relative morality where your conscience is your guide.”

These are important themes and questions and they don’t have pat answers. “The Brass Tacks Ensemble is founded partly on the idea that we must engage the audience, and to do that it would be better to ask questions than provide answers,” says Ingagiola.

As with every Brass Tacks show, audiences can also expect a stripped-down aesthetic that focuses on the actors, making minimal use of props, sets, costumes, or lighting. In this way, Ingagiola hopes to eliminate distractions so that the audience can focus on the story that’s being told and the relationships that form between the characters. Hopefully, audiences will also relate the themes within the classical text to how they live their own lives. “The more you add to a production in terms of costumes, props, sets, etc., the more you lock it into a specific story about very specific people in a very specific time,” explains Ingagiola.

I was fortunate enough to see BTE’s production of Merchant of Venice last summer and it was a truly wonderful show, both thoughtfully paced and very well acted. If that’s any indication of what we can expect from Measure for Measure, this production is likely to be exceptional.