The North Coast Modular Collective is like a modular synthesizer: made up of many parts to create a sonic whole. The group is a loose collection of Washtenaw County-area musicians and creators who teamed up earlier this year and pooled their talents to share gear, create new instruments, and trade ideas.

The trio of Joe Bauer, Dan Blades, and Bill Van Loo will represent the collective at Mini MoogFest, and we asked them their about plans for the event, the gear they'll be using, and their favorite synth-leaning recordings. (Also, here's a primer on Eurorack synths, which the collective mentions several times.)

Q: What's your plan for MoogFest?
NCMC: Three of us from North Coast Modular Collective will be there. In short, we’re a group of artists, academics, and makers who aim to spread curiosity, enable exploration, and foster community. Then each of us will spend 15 minutes doing some combination of talking and performing.
Bauer: I’ll be playing about 10 minutes of semi-improvised electro-glitch music (similar to this or this) and then I’ll spend about five minutes explaining and demonstrating a few of the basic concepts and techniques I used. If you’re curious about how I get ready for a show you can follow me on Instagram or YouTube to see some behind the scenes clips as I get prepared.
Blades: I’ll spend a couple of minutes talking about my latest modular build. I’ll then be using it as an audio source and running the audio through some Eurorack effects. The set will be completely improvisational.
Van Loo: I will be performing a rolling 10-minute exploration of deep dub techno chords and sounds, and then spend about 5 minutes explaining what I used and how I used it. Check out the chromedecay Instagram account for behind-the-scenes takes on how this has been developing, via grainy 60-second square videos.

Q: What's your gear setup?
Van Loo: Since we’re focusing on the modular aspect for this performance, I’ll be using a single row Eurorack system, with a mix of prototype North Coast Modular Collective modules, modules from other manufacturers, and DIY pieces. Most of the main sounds will come from this single set of modules, but I’ll add some drum sounds -- some created with a virtual modular synthesizer called VCV Rack -- sequenced on the Novation Circuit. Delay and reverb will allow me to create the atmosphere I want for my set.
Bauer: I’ll be using a 9U, 104hp self-built Eurorack case with 32 modules from 18 different manufacturers. Fourteen modules were self-built. Of those, four are North Coast Modular Collective designs. English translation: I have a wood box with a bunch of electronics in it -- some of them I built, a few I helped design -- and wires and knobs hanging out of it.

This is what it looks like without any of the wires plugged in: 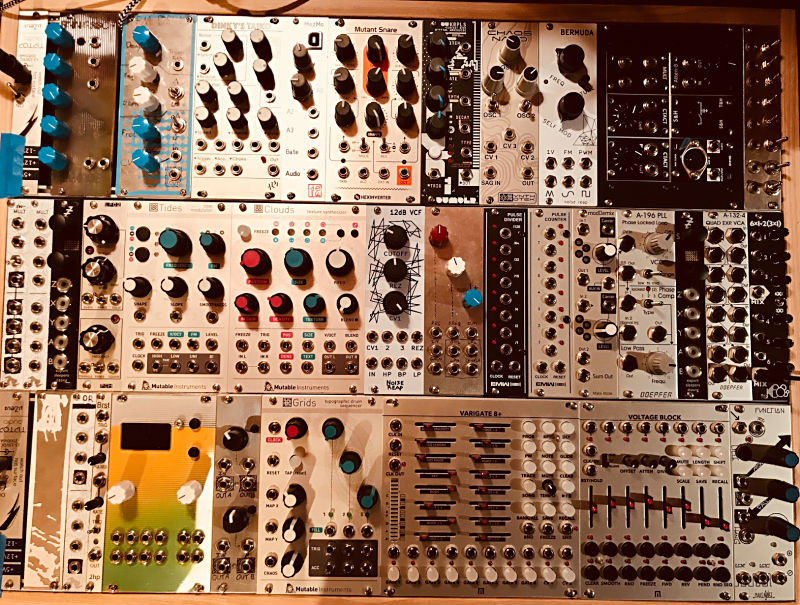 Blades: My main setup is mostly Eurorack. It’s my vessel to explore sound design. It’s constantly changing and evolving. Lately, I’ve favored modules that work well in live situations, modules that can sample audio, and modules that produce random voltages. I want my setup to surprise me and anyone who wants to listen.

This is my latest completed project that I will be using for my performance: 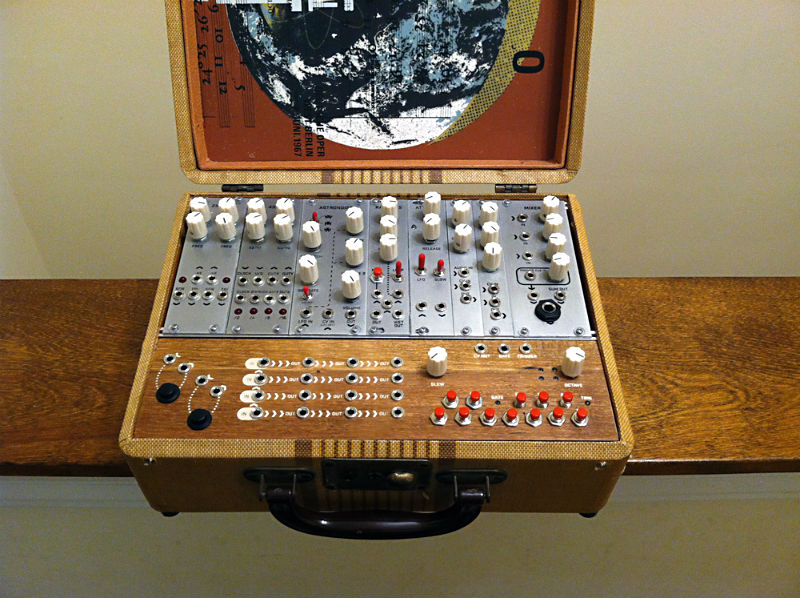 The idea behind this project was to build a flexible, self-contained, portable synth that had the capability of being used as a “traditional” monosynth but could also be an experimental sound platform. The synth is made up of 10 Eurorack modules, built from available manufactured PCB boards, installed into a repurposed vintage suitcase.

NCMC: North Coast Modular Collective tries to spread curiosity, enable exploration, and foster community. To that end, we held a three-day camp over summer where we designed and built our own set of modular synthesizer cases. During that time we also built and programmed a few modules from a popular module designer who goes by the name of mxmxmx.

Our design process often includes cardboard mockups of early concepts to make sure the design concept basics work in physical form. From there we commonly break up circuits into isolated building blocks and use several iterations of design/build/test for each design block before integrating them together into a single module. 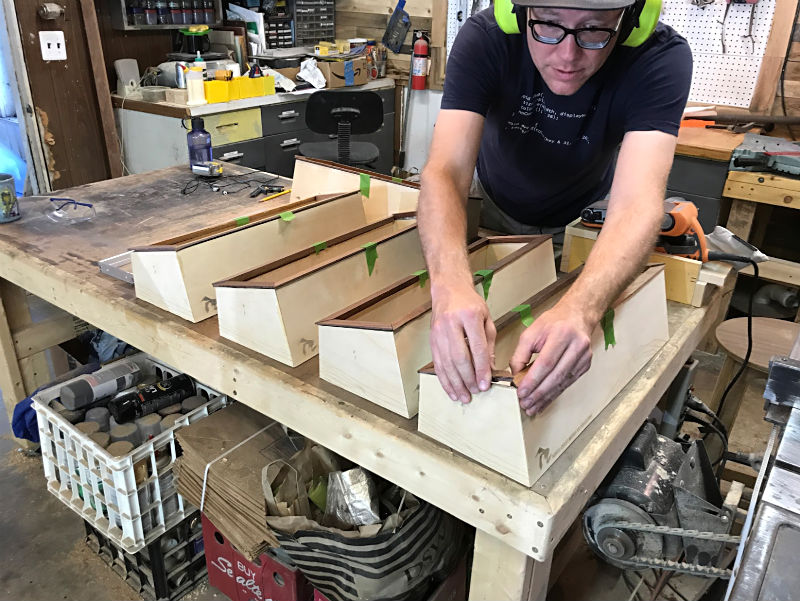 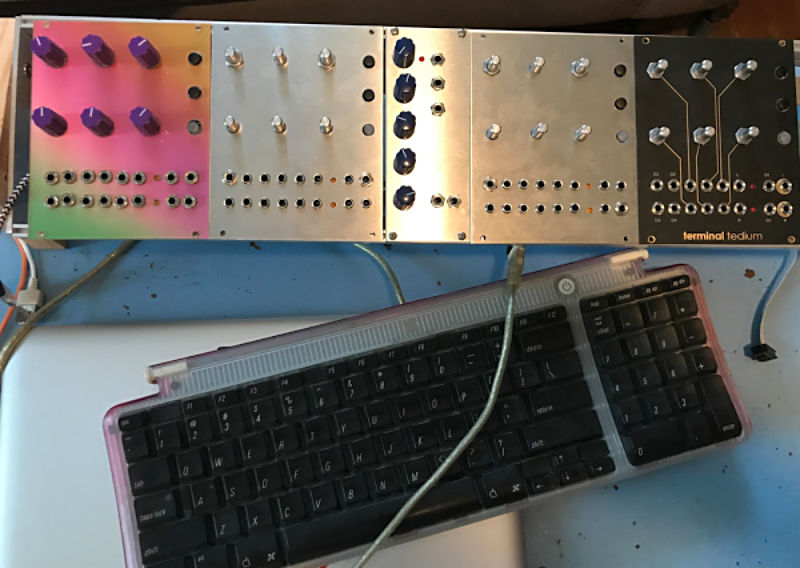 Four of the five Terminal Tedium mxmxmx modules NCMC built during summer camp. These are based on the Raspberry Pi. 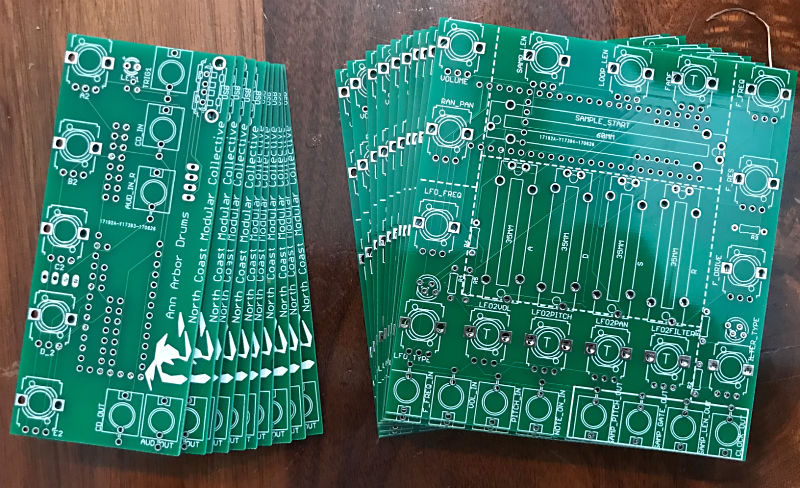 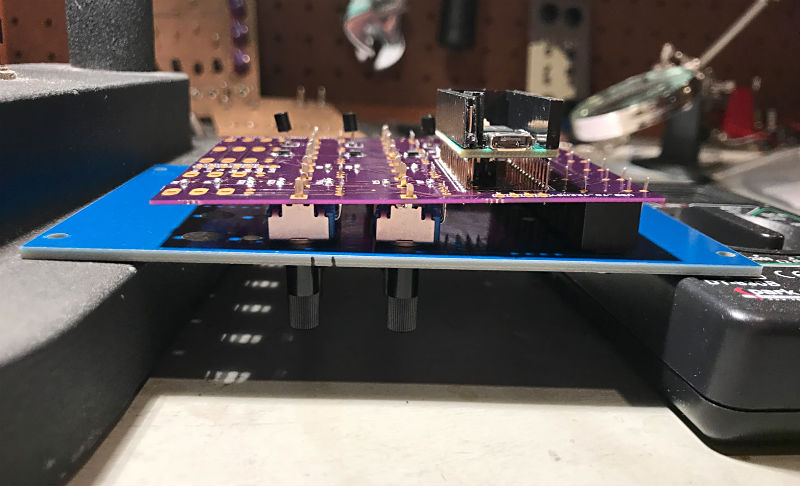 An NCMC-designed prototype module in mid-construction. 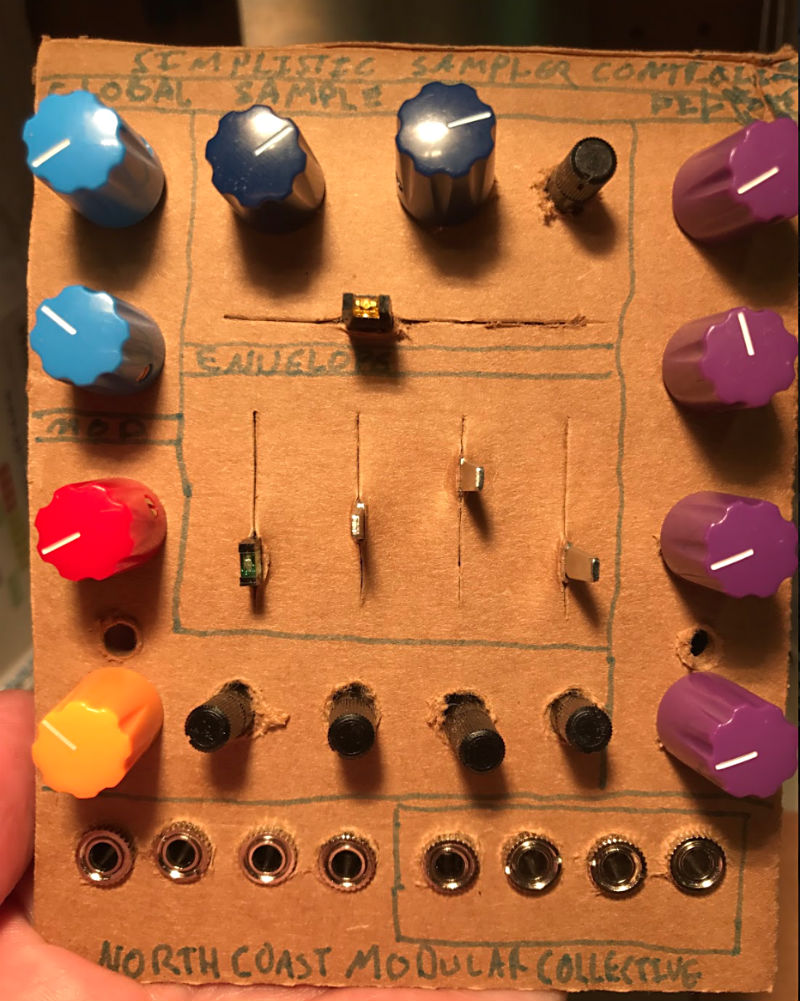 NCMC uses cardboard-based proofs of concept for testing the layout of parts.

Q: Name some synth-related records that you'd recommend to newbies.
Bauer: It’s not a record, but I highly recommend watching:
➥ I Dream of Wires (AADL link). It’s a great introduction to the history of synthesis and does a nice job of putting some context around Bob Moog and Don Buchla and how their work still impacts music today.
Blades: One of my favorite artists:
➥ Venetian Snares, Traditional Synthesizer Music: A full album of live modular music created by Aaron Funk. Here is a video of Aaron with his modular performing a track from the album:

Van Loo: Here are a few records that have inspired me and are well worth digging into:
➥ Kraftwerk, Computer World: A perfect combination of pop sensibility with the most pure electronic sounds. Utterly classic.
➥ Monolake, Hong Kong: A deep slice of Berlin-based dub techno, using found sounds, synthesis, and echoes to set an amazing atmosphere. The duo went on to found Ableton, the company that makes Ableton Live, perhaps the most important piece of music software in the past 15 years.
➥ Telefon Tel Aviv, Fahrenheit Fair Enough: Impeccable sound design and programming. Still an inspiration 15 years after its release.
➥ Psyche/BFC, Elements 1989-90: Classic Detroit techno from one of my favorite Carl Craig aliases. “How the West Was Won” from this record may be one of the loveliest and most gently melancholic pieces of electronic music that exists.
➥ Steve Reich, Music for 18 Musicians: Not truly electronic at all, but so deeply influential to how I approach electronic music as to be essential, and Reich’s early tape and electronics work predates much of the current interest in things like Euclidean rhythm, field recording, and phasing.