Glowing Highlights: Laverne Cox at U-M's Center for the Education of Women symposium 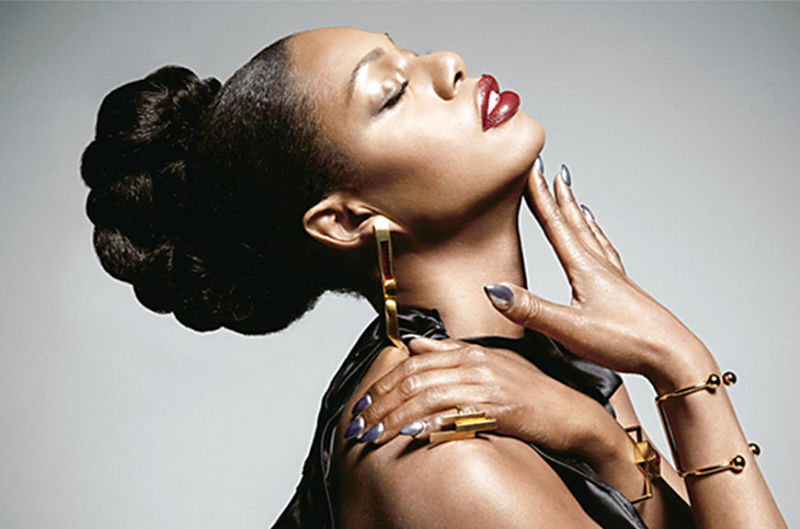 Nailed it: Laverne Cox photo shoot for her collaboration with Orly nail polish.

When Orange Is the New Black's Laverne Cox walked out onto the Rackham stage, my immediate thought is that she is even more beautiful in person than on screen or in photos, and I don’t exactly understand how this is possible. She looks as though the sun is shining directly on her. I think maybe this is what actually mastering the art of highlighting looks like, but I’m also sure I could put on all the makeup in the world and I would still never look like that.

I’d like to say that as soon as she started speaking, all such frivolous thoughts left my head, but frankly, that would be a lie. I did settle in with the rest of the sold-out crowd that has come to see her as the keynote speaker on Nov. 15 for the 2017 CEW Spectrum of Advocacy & Activism Symposium put on by the Center for the Education of Women at the University of Michigan, and for the next hour and a half, listened to a great (if slightly scattered) talk that encompassed gender and race theory, her life story, and how the Ann Arbor community should respond should white supremacist Richard Spencer come to campus.

Cox opened her speech with an emotional acknowledgment of the standing ovation she was met with when she walked out on stage: "To see a whole room of people standing, applauding for a black transgender woman? I don't know, it still feels revolutionary." And it did to me, too, to see a whole room of people react to her speech as though they were in church, clapping and snapping along to her powerful words. The crowd was extremely diverse and I was moved to see so many folks of all ages, races, and genders listen so intently to Cox without questioning her right to speak.

Cox titled her talk “Ain’t I a Woman,” after Sojourner Truth’s famous 1851 speech at the Women’s Rights Convention. White Americans have manipulated, exploited, and questioned the womanhood of black women since the day our country was founded, and now cis Americans do the same to trans women. Cox described how she, like Sojourner Truth before her, has been told that she isn’t really a woman, then executes a perfect hair flip and asked, “And ain’t I a woman?” The crowd went wild. The applause kept coming as Cox seamlessly transitioned from bell hooks to Cornel West to Judith Butler. I was trying to keep a list of every academic she mentioned and I wrote so fast that my hand cramped. I also had to ask my seatmate to borrow extra paper.

In recounting her life’s story, Cox told one particularly disturbing tale of her third-grade year, in which her teacher warned her mother that if she didn’t act soon, Cox would “end up in New Orleans wearing a dress.” Following this, Cox was forced to see a therapist who suggested injecting her prepubescent body with testosterone to make her more masculine. Luckily for Cox, her mother rejected this proposal, but that didn’t stop her childhood from being riddled with bullying, a church that branded her a sinner, and a suicide attempt at only 11 years old. Cox said she was lucky to get an excellent education and escape the violence of her youth. This is not, however, the experience of most trans women of color, a point that Cox was quick to make. She reminded the audience that 2017 has been the deadliest year on record for transgender Americans, and trans women of color are hit the hardest by this violence.

Despite this upsetting truth, Cox seemed genuinely hopeful about the future. She argued for bringing people into conversations rather than calling them out. Cox truly seems to believe in finding the humanity in everyone, although when asked about Richard Spencer’s possible visit to the University of Michigan campus, she was clear that certain beliefs and behaviors couldn't be tolerated. She stated that her current focus is on voting rights and working against gerrymandering. She implored the audience to “vote, vote, vote,” and she left us with the advice, “Stay woke and stay strong!” At that, the crowd rose as one to clap. Cox did one more hair flip, then turned and walked off stage, leaving behind some of the sunshine that she brought in.