It's De-Lovely: "Anything Goes" at Encore Theatre 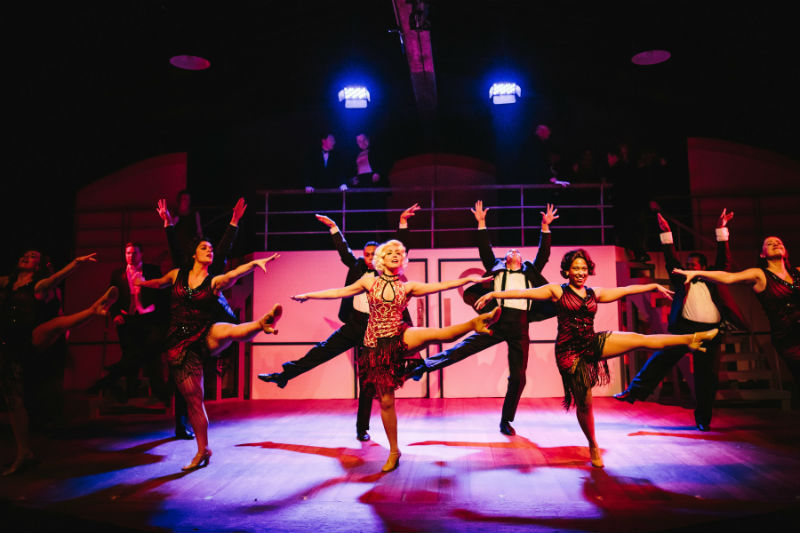 Diggers of gold: Despite Encore’s space limitations, the choreography in Anything Goes winks at the grand spectacles of Busby Berkeley.

“Tap Your Troubles Away” isn’t one of the songs featured in the screwball musical comedy Anything Goes, but it’s nonetheless what popped into my head upon leaving Dexter’s Encore Theatre on Sunday.

Why? Because this silly confection of a Depression Era, vaudeville-infused musical, jam-packed with wordplay and witty Cole Porter tunes, offers a pleasurable, two and a half hour escape from our increasingly stressful world.

Originally staged in 1934, with a new book by Timothy Crouse and John Weidman (original book by P.G. Wodehouse and Guy Bolton, and Howard Lindsay and Russell Crouse), Anything Goes tells the story of Wall Street broker and ladies’ man Billy Crocker (Sebastian Gerstner), who stows away on his boss’ cruise liner upon spotting the woman he truly loves, heiress Hope Harcourt (Emily Hadick), on board with her British fiancee, Lord Evelyn Oakley (David Moan). Hope’s family suffered great losses during the Crash of ’29, so her engagement is more pragmatic than romantic, and her heart secretly belongs to Billy. Meanwhile, brassy nightclub singer Reno Sweeney (Olivia Hernandez) only has eyes for Billy, too, but over time, an unlikely friendship grows between her and Oakley.

Oh, and there’s a scheming, wisecracking gangster-in-hiding (Moonface Martin, played by Dan Morrison) and his moll (Erma, played by Elizabeth Jaffe) because isn’t there always? Some featured Porter songs in the show (besides the title number) include “I Get a Kick Out of You,” “You’re the Top,” “It’s De-Lovely,” and “Blow, Gabriel, Blow.”

The latter number is one of the production’s best and most extensive showcases for Rachel Constantino’s joyous choreography, the other being the first act's energizing closer, “Anything Goes” -- which, amazingly, winks at one of the biggest dance men of the show’s era, Busby Berkeley, in its patterns and formations, despite the Encore’s relatively tight space limitations.

But the big, splashy, “tap-gasm” (my term) numbers weren’t the production’s only highlights. “The Gypsy in Me” comes off as both hilarious and sexy, with Moan and Hernandez turning up the fizzy flirtation factor through Constantino’s cheekily sensual choreography; “Buddie, Beware” has Jaffe literally rolling in men; and in “Friendship,” Hernandez and Morrison break the fourth wall by acknowledging that they can’t keep musical director Tyler Driskill vamping forever while they neurotically commiserate and kvetch about various things.

These moments epitomize the Encore production’s polished, sophisticated breeziness, as established by director Thalia Schramm, who keeps the pace clicking without ever making the scenes feel rushed. Plus, Schramm subtly, wisely downplays the culturally cringey parts of the show -- namely the often-exaggerated depiction of a reformed Chinese gambler -- while still honoring the script. Now, how one man’s outfit comes to disguise two characters, well, that’s the kind of musical theater math you have to just roll with. 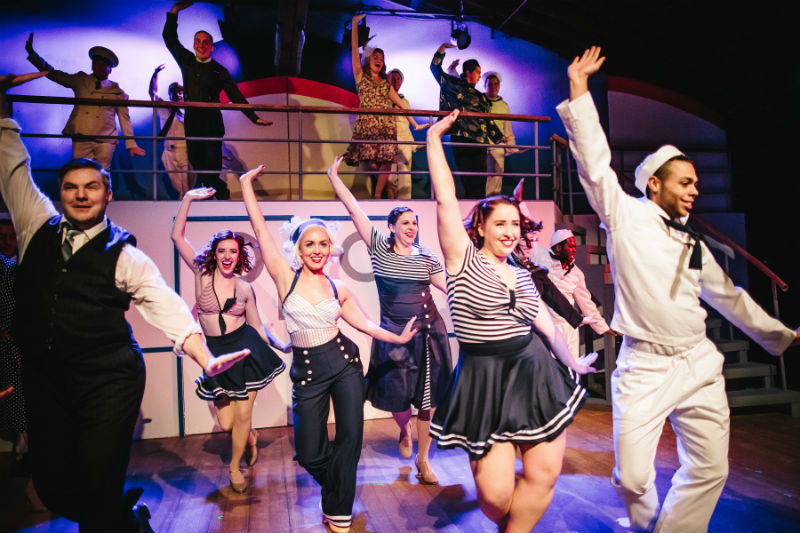 So easy to love: Encore's production of Anything Goes grabs your eyes and ears.

But Urick’s dresses are only one reason it’s hard to pull your eyes from Hernandez whenever she’s on stage. The charismatic actress commands the stage with a winning charm, and her knockout vocals have an effortlessness that’s only achieved through hard work and discipline. Gerstner is a delightful, graceful, and appealing leading man, and Morrisson and Jaffe have a ball with their deliciously cartoonish supporting roles. One of the most impressive leaps, though, is achieved by Moan, who takes the stuffy straight man role and renders it hysterical by seizing upon every opportunity -- like Oakley’s fascination with American colloquialisms, for instance, or his penchant for dancing around in a short robe and sock garters (courtesy of Urick) -- to wring humor from the character, and thus make Oakley more interesting.

Of course, there’s no mistaking that Anything Goes is a show built around the music, not the other way around; and with its absurd plot, cornball humor, and broad characters, the musical is more about making audiences feel good for a couple of hours than it is about making them feel much of anything else.

But these days, I’ll happily take that.

"Anything Goes" runs through Dec. 23 at The Encore Theatre, 3126 Broad St., Dexter. Showtimes: Thursdays, Fridays, and Saturdays at 7:30 pm and Saturdays and Sundays at 2 pm. Visit theencoretheatre.org for tickets and more info.