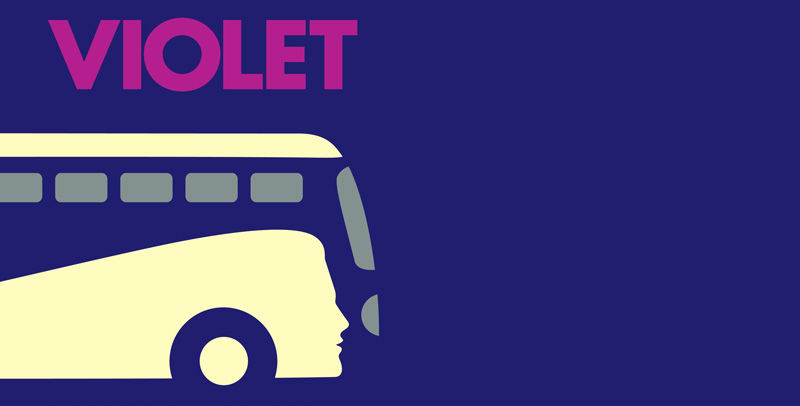 U-M's production of Violet doesn't shy away from looking at the play's themes of racism and acceptance in the context of today's socio-political troubles.

Violet is a musical that’s known both for its soaring gospel- and blues-infused score and for its social commentary about race relations. Originally written for Off-Broadway back in 1997, the show follows a young, facially disfigured Caucasian woman in 1964 who travels across the United States in the hopes of having her outward scars healed by a TV evangelist. Over the course of her journey, she meets and falls in love with an African-American man. “It’s about finding out who you are, accepting who you are, appreciating who you, and loving who you are. And then being able to navigate this world,” says Mark Madama, who is directing a production of Violet this weekend through the University of Michigan School of Music, Theatre, & Dance department.

Violet will be performed in the Arthur Miller Theatre, a 280-seat space that’s a good fit for the rather intimate show which features approximately 15 University of Michigan musical theater majors along with an orchestra directed by Jason DeBord, a musical director on the faculty at the University of Michigan. Madama has been rehearsing with the Violet cast for the last five weeks, and he says that he feels especially proud of the way the cast has started “developing relationships with their characters and incorporating their own lives into who these characters are and their ability to tell stories.” “There have been many conversations about diversity," says Madama. "Conversations about how we see ourselves and how we are seen through the eyes of others.

It’s been an experience where everybody has contributed a great deal to how we want to have this story told.” Violet focuses a lot on what it means to judge a person by their appearance and how we in our culture judge beauty. “The biggest challenge has been navigating the present political-social climate with the history of a show that was written to occur in the 1960s. ... This is a show about race and self-acceptance. Navigating this story in a way that’s going to not feel that we are either avoiding issues or are not somehow confronting the issues that are today just as vital as they were then.” Madama first directed a production of Violet back in 2000 when they were first releasing the rights to the musical after its Off-Broadway run. “This was the show I was directing at Casa Mañana Theatre in Fort Worth, Texas when I got the call to come to the University of Michigan to teach.” “Off-Broadway shows don’t necessarily have the name value that a big Broadway show would have. And so it would be a harder ticket to sell," says Madama. "That would be one of the reasons that it didn’t take off like a Thoroughly Modern Millie might. But now it’s being done much more often because of the recent revival on Broadway that starred Sutton Foster and one of our graduates, Alex Gemenyani.” “This is a show about the joy of being human,” says Madama. “It’s about being able to change and grow.”