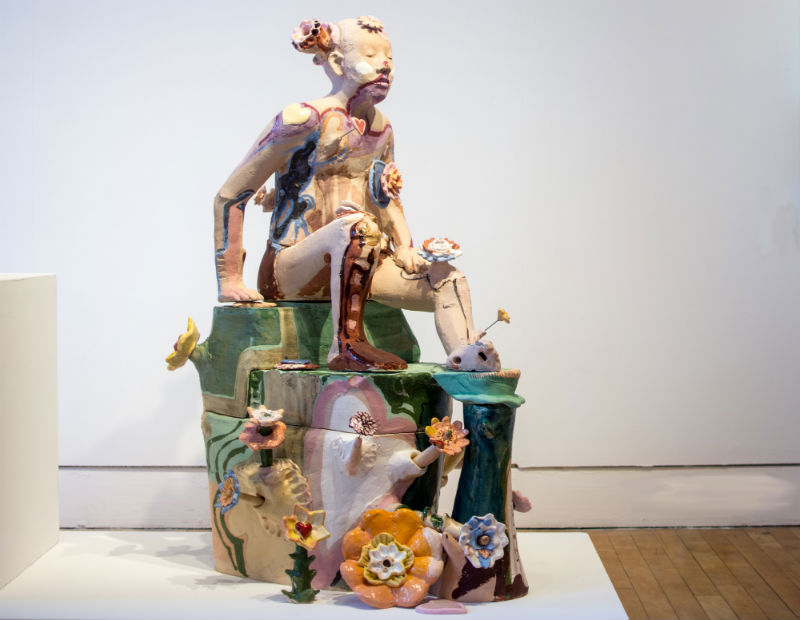 The 95th All Media Exhibition marks the continuation of a tradition established in 1922 when the Ann Arbor Art Center was known as the Ann Arbor Art Association. There are 29 artists’ works on display through January 13, with a large portion from Michigan and others from surrounding areas including Illinois, Indiana, New York, Minnesota, Ohio, Pennsylvania, and Wisconsin. The Ann Arbor Art Center’s previous shows have illustrated its commitment to exhibiting an extensive variety of contemporary artwork, and the All Media show is no exception.

Alison Wong served as juror for this exhibition. Wong received her MFA at Cranbrook Academy of Art, and her BFA at the Maryland Institute College of Art. She is also the director at Wasserman Projects in Detroit's Eastern Market. Wong reportedly looked through 600 works of art in order to select the 36 works in the gallery. Four artists received awards, from best in show to honorable mention:

Lisa Marie Barber's Brownish Girl is a large ceramic work depicting a seated figure. The female form, as indicated by the title, is painted with swaths of color that range from black, blue, and brown to pink and purple. The form is covered in a diverse palette; the skin and base adorned with pattern and painterly embellishments. The pedestal on which the figure is seated is adorned with flowers. Heart patterns are repeated in the centers of flowers, on the girl’s skin, and appear again on the painted layer of the pedestal. In her statement, Barber recounts her professional career, in which large-scale installations of “passive figures occupy dense arrangements as if centerpieces to improvised shrines.” The work in the gallery is a scaled-down version of her previous assemblages, which makes the work more easily transportable. She cites her inspiration as “imagined, decorative conceptions of home, gardens, peacefulness, playfulness, and celebration.” Barber’s interest in gardening is evident in the whimsical floral pieces that sprout from the surface of the sculpture, even from the girl’s skin. Barber grew in in Tucson, Arizona, and credits Central American folk art and Mexican Catholic shrines and her Mexican-American heritage as an important part of her aesthetic. Barber received her MFA from the University of Texas in Austin and has since worked actively as a teacher and artist. Her work has been featured in American Craft Magazine, Ceramics Monthly Magazine, and 500 Figures in Clay. 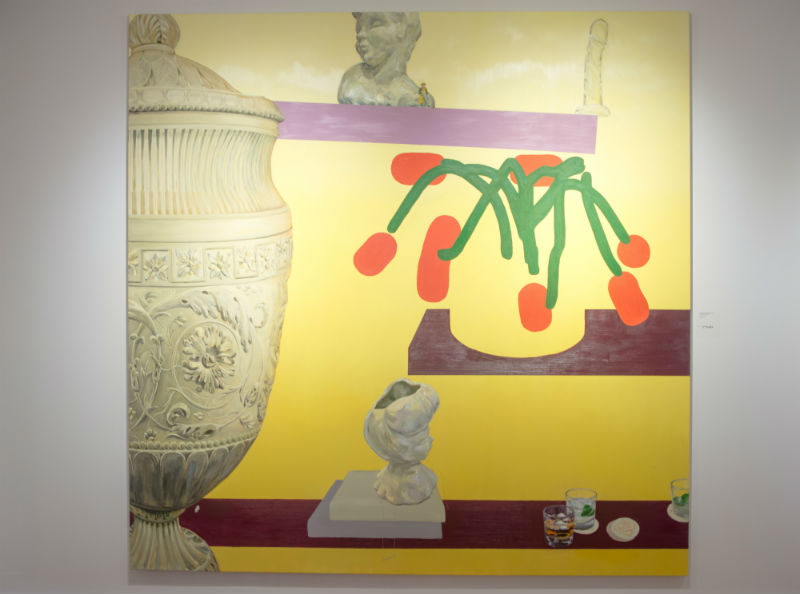 Rachel Pontius’ 6' x 6' painting was the first thing I noticed upon entering the gallery. It is large, vibrant, and engaging. The flat yellow background and shifting perspectival space gives the piece a strangeness, with some figures appearing in great detail, some floating on brown and purple swaths of paint that represent shelves, and other objects rendered flat and abstracted. The title references the artist’s intent to comment on the language of painting (as well as the content), combining diverse modeling techniques with pop-art abstraction. Pontius’ statement offers a humorous glimpse into the artist’s intent: “Like a good buzz, still life painting imbues seemingly valueless items with a sense of grandeur and the capacity to control and shift reality by saying opposing things simultaneously. My paintings physicalize absence through stand-ins, avatars and nostalgic objects -- both manipulative and sincere the images betray our own personal memories and impose false totems.” Her nostalgic objects combine with anachronous modern objects, phallic objects, and blank spaces that represent objects through their absence, as Pontius has done with the abstracted floral piece. Pontius received her MFA from Cranbook Academy of Art and her BFA from School of Visual Arts, and currently lives and works in Detroit. 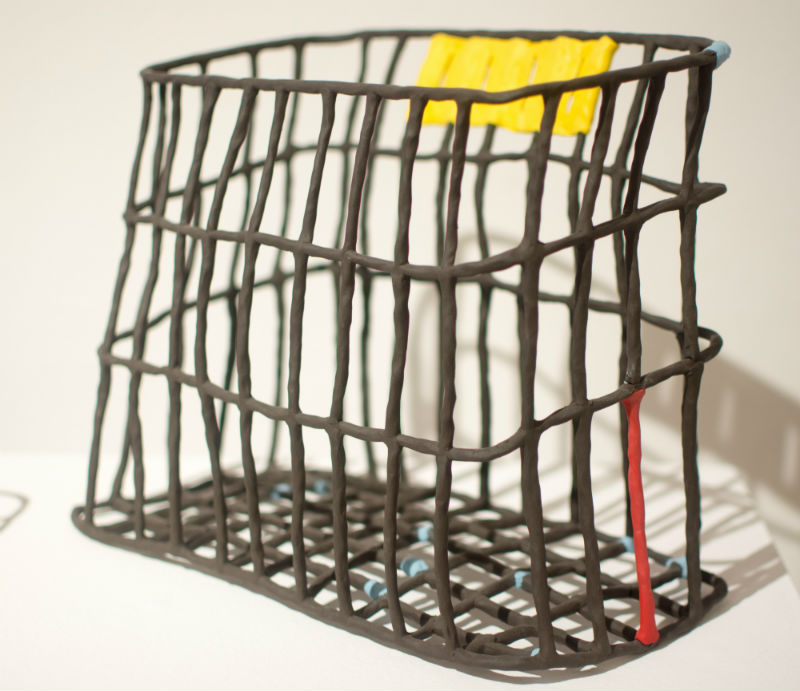 Priya Thoresen contributed three pieces to the exhibition. One of the three works, Basket with Primary Colors, received the honor of a third place award. Thoresen’s dark baskets are adorned with small sections of color. This piece, as the title suggests, is sparingly decorated with red, yellow, and blue. One red “wire” on the side, one square of yellow along the top, and small patches of blue dot the bottom of the cage-like structure. In her artist statement, Thoresen describes her work process, in which she seeks “to contrast and balance control and intentions for working with the material of clay with the organic and unexpected results of the firing process.” She commonly builds grid forms, which reference wire baskets, and are executed in the scale of common domestic objects. When the work is fired in the kiln, “the clay begins to flux out and the carefully placed grid lines begin to move, sometimes with dynamic and precarious results.” Basket with Primary Colors is an excellent example of the serendipitous results of the firing process, its once-rectangular frame rendered strange by the heat of the kiln. Thoresen is based in Minneapolis, Minn. She has a BA in studio art and received an MFA at Arizona State University in 2017. She also currently works at Concordia University as an adjunct faculty member. 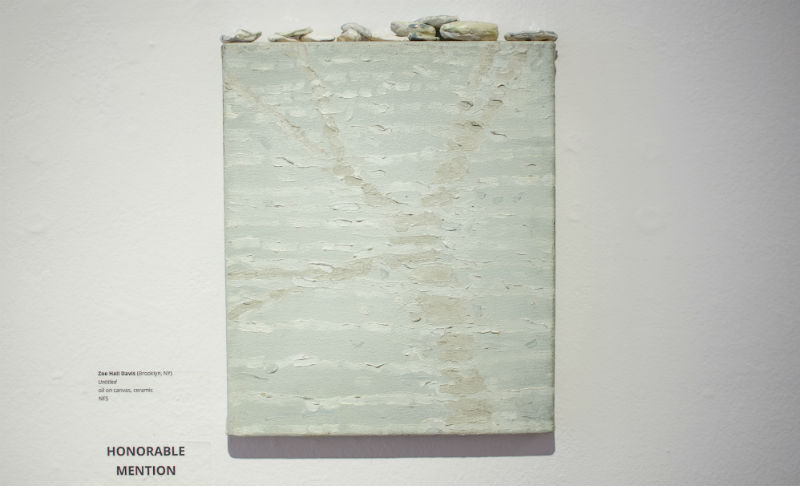 Zoe Davis’ abstract paintings, self-described as “hand to head size,” are made to reference everyday life. Davis suggests that in her paintings, the “images that fall into view are equally alive and mundane, yet no more climactic than the reflection of a tree in water. Snow shadows, sunsets, dead fish, a view between curtains, and the like prescribe the representational subjects of my work.” The works are “anti-monumental and introspective,” and exist by “celebrating their own making.” Despite these descriptions, which seem to suggest Davis’ painting is a celebration of modern or minimalist art practices, the artist intends the work to criticize modern painting with “a quiet reductiveness,” manifested through her palette choices, and “painting cliches.” Davis was born in Detroit in 1994. She graduated from the Cooper Union School of Art in 2016, and currently lives and works in Brooklyn, New York. 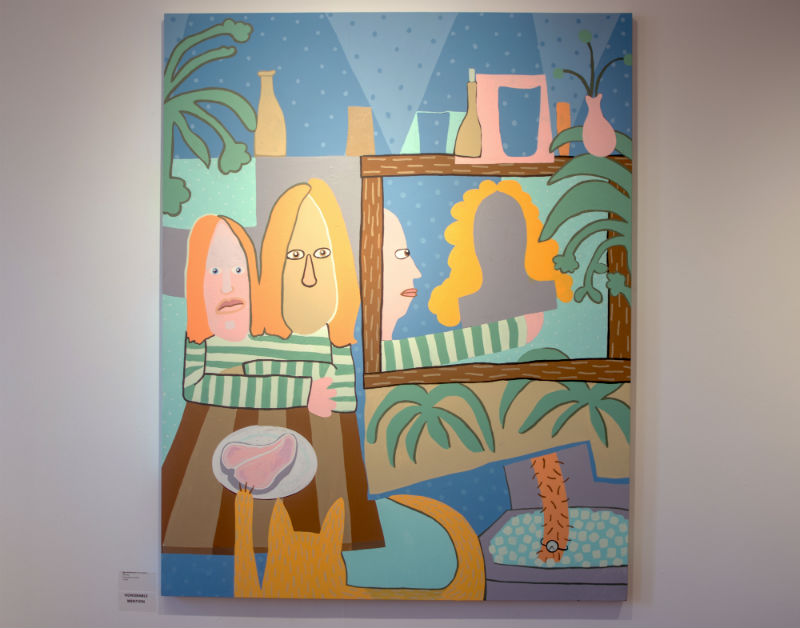 The "95th All Media Exhibition" is at the Ann Arbor Art Center, 117 W. Liberty St., through Jan. 13. Free. Visit annarborartcenter.org for gallery hours and more information.