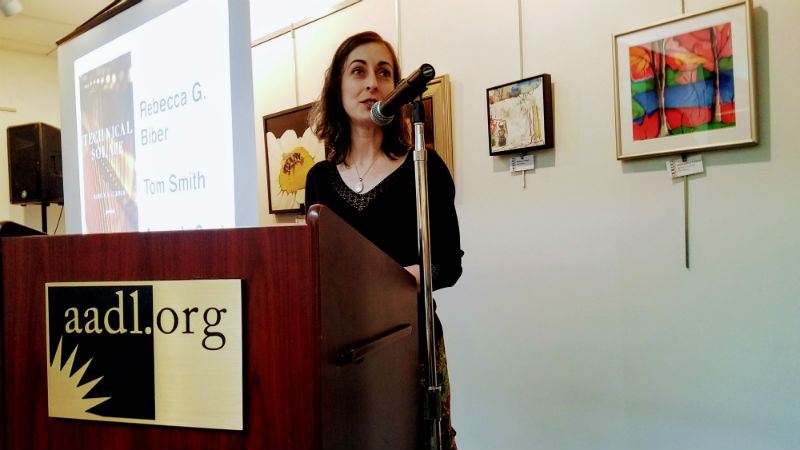 Rebecca Biber reads from her book Technical Solace during the Fifth Avenue Press launch party at AADL on Nov. 5, 2017.

“I’m going to have my own experience of whatever writing is.” --Rebecca Biber

On Saturday, Jan. 13, at Bookbound Bookstore, Rebecca Biber read from debut poetry collection, Technical Solace. Her longtime friend Roy Sexton emceed the event. They know each other mostly through theater, where Biber often performs musical accompaniment for local shows. Sexton introduced her, listing some of Biber's accomplishments, but lingering over her musical talents. This was a fitting way to begin since Biber’s relationship to music is the first doorway into her work.

"The piano is like a living machine. It responds to me. I respond to it, and we have a relationship.” --Rebecca Biber

If you’re familiar with elements of a writer’s biography, it is common to wonder just how autobiographical the work is. When you read a poem that talks about the practice of becoming a pianist and you know that the writer is a piano teacher, the work can seduce you into thinking you’re walking through that writer’s mind.

I know Biber as a writer. Many years ago we attended the same writer’s group, and I had the pleasure of reading some of her poems as she worked through them. As I listened to her and considered her work, I tried to remember what it had been like to critique her and to be critiqued by her. What I remember about being critiqued by her is her precision. This attention to the language, to the ideas she expresses, stands out to me now. Biber, it seems, likes to do things correctly.

Her poem “Lazy Money” rang that bell for me. It is a poem about mutual funds. Here she explores what she calls the “fraught dynamic between femininity and earning money.”

"She’s the daughter who turns from the party
to ask where the church is."
--from “Lazy Money”

There is something in Biber’s poetry that suggests a lifetime of wide and deep reading. You get the sense that she has absorbed the classics, all of the things that one should read in the pursuit of building one’s mind. Her poetry blog, Doggerel, supports that idea. One of the things that authors are advised to do in preparation for launching a book is to build a platform, to create reasons for people to know who you are and what your work is about. She began Doggerel, in part, to document the process of becoming an author. Another thing that she does there is to write about and explore what others have written about the relationship between music and poetry. There you’ll see her quote Stravinsky, mention Louis Armstrong, and remember a poem that her brother wrote when he was 7.

“We all like to think we’re experts on our dads. Mostly it’s true.”
--from “Cemetery II”

During her reading, Biber shared a poem she wrote in memory of her friend. They had been together for several years and had shared classical music, sarcasm, and an appreciation for doing things in the way that they should be done. They also connected over "skepticism about the fatuous, especially religious nonsense." When she had attended his funeral, she felt this way, and half expected him to indicate to her that he shared the feeling.

“This is where I feel like a stand-up comedian trying material on an audience for the first time. “ --Rebecca Biber

Once Technical Solace was published, Biber got a burst of new creative energy. She shared a poem where she contemplates the difference between the way that American news reporting pronounces Assad and how British reporters pronounce the same name, noticing the similarity in the second pronunciation and the term asshat. This is the kind of poem you expect to draw applause in Ann Arbor. Even in the world of free-verse poetry, you sometimes get exactly what you thought you would.

Biber fielded questions both from Sexton and from the audience mostly about the craft of writing and the interaction between music and poetry. Creative people always seem to be interested in the details of another’s practice. We learned that many of Biber’s poems begin on scraps of paper, her preferred writing implement a pencil. She is fastidious about shredding early drafts and notes. She works on a piece until it seems to be done, comparing writing to musical practice. Sometimes one masters a piece of music quickly; other times it has something to teach you for years to come. There is no topic that Biber wouldn’t write about; though there are things that she writes that are not intended for a wider audience. And yes, for Biber, music and poetry satisfy distinct and separate creative outlets for her.

“I don’t love performance. I love practicing. That’s where all the work gets done.” --Rebecca Biber

During her reading, Biber shared a poem called "Sol Etude." Take a moment say it aloud: "Sol" as in "do, re, mi, fa, sol" and "etude," the name given to music intended to improve the musician’s technique.

Related:
➥ Read an interview with Rebecca Biber and other scribes from the first class of Fifth Avenue Press authors.

You can buy "Technical Solace" here, Amazon, or at Bookbound, and you can check out the book from AADL.