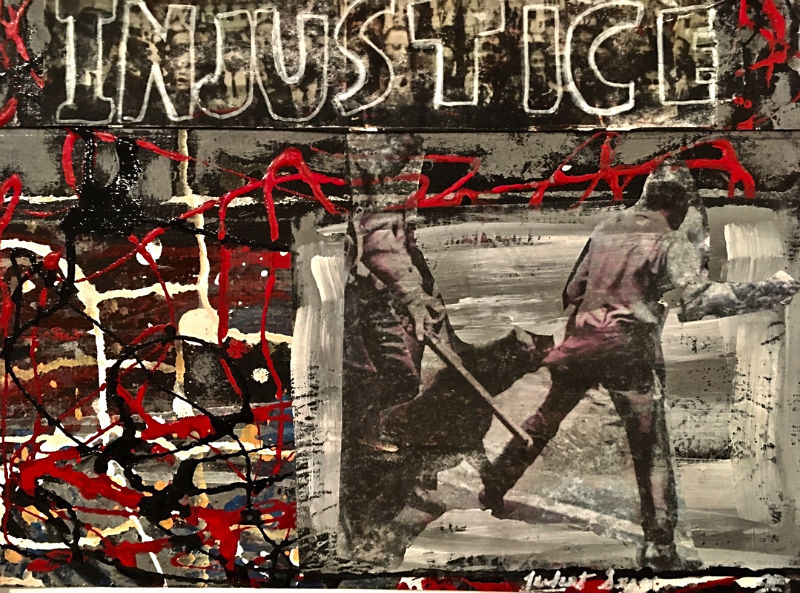 In 1958, Juliet Seignious was a founding member of the Alvin Ailey Dance Company. It was during her time in this groundbreaking modernist dance troupe that Seignious started to explore her African-American heritage, which stretched from the Harlem of her youth to her parents’ roots in Edisto Island, S.C., which was a frequent landing spot for slave ships and, eventually, the home of escaped former slaves.

Once her dance career was over, Seignious turned her attention to another form of artistic expression: painting. But her desire to delve into African-American history continued unabated. A 1990 exploratory visit to Edisto Island inspired Journeys, which is comprised of 15 brightly colored but mysterious acrylic paintings and one pastel drawing.

"One night on my trip to Edisto Island, South Carolina, I saw these long figures in the distance (shrouded by shade and overhanging foliage)," Seignious wrote on her website. "The figures were moving away from me and towards some location in the distance. It was not clear where they were going nor was it clear if it was a procession or a gathering."

Other Seignious series steeped in African-American experiences include: An Odyssey of Whispers, which explores black spirituality; Requiem in Color(s), which reflects on police brutality in minority communities; and Over/Come(ing), which was inspired by John Lewis’ graphic novel series March, about the Civil Rights Movement. Seignious uses photos from the Selma to Montgomery, Ala., march in 1965 and manipulates them with paint and graphics.

“The turbulent period of the march of 1965 in the United States was in many respects a reflection of my own turbulence and thus I remember it well,” Serignious wrote in a March 2, 2017, blog post. “Inside, I was expecting a child and in an unhappy relationship. As a result, my focus was fragmented and there was an uncertainty of the future, all thoughts moving through me at once. Outside, the struggle for human and civil rights was being waged against a seemingly unbending ideology of separation, anger and hurtful language, boldly denying people the right to exist and to pursue what they wished.

“The struggle was within; the struggle was without,” Serignious wrote. “It sounds odd to say it but from the march I was inspired and uplifted. In its wake, I knew I would be able to accomplish what I set out to do: addressing my difficult decision to put things in truth.” 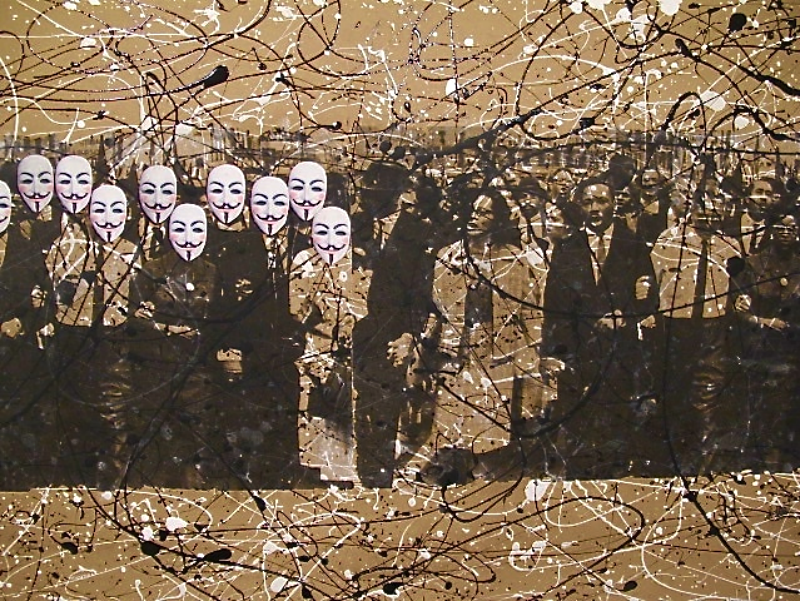 But Over/Coming(ing) is also about the connection between today’s protests to those of the past. In Over/Come(ing) # 11, she adds the stylized Guy Fawkes masks from V for Vendetta that are now associated with the modern Occupy and Anonymous protest movements to the famous photo by Steve Schapiro that features Martin Luther King linking arms with fellow civil rights activists John Lewis, the Rev. Jesse Douglas, James Forman, and Ralph Abernathy. (The photo features frequently in Over/Come(ing).)

“This series of paintings was initially conceived in reflection about current marches and their connection to marches in the past,” Serignious wrote in another March 2, 2017, blog post. “Within this work, I seek to explore the power/complexity/hopefulness of social movement(s), the most powerful of human creations, for improving the world."

Over/Come(ing) was on display in fall 2017 at U-M’s Weiser Hall, in the new offices of Community-Engaged Academic Learning (CEAL). But if you missed the exhibition there, you can view eight of the 20 paintings in the Over/Come(ing) series at the Ann Arbor District Library’s downtown branch through Feb. 26. (See all 20 paintings here.)

To have a greater understanding of Seignious' personal experiences with racism and how they affected her Over/Come(ing) paintings, visit her blog. In addition to recalling a Girl Scouts trip where she scrapped with a white girl over racist language, Seignious tells the tale of traveling from New York City to Charlestown, S.C., as a 10-year-old. It was her first experience with racism -- though it didn't stop Seignious from sitting at the front of the bus or drinking from whites-only water fountains.

That defiant spirit informs the Over/Come(ing) series, which feels like action paintings turned into direct action.

A selection of Juliet Seignious' "Over/come(ing)" series is on display through Feb. 26 in the in the lower level display cases of the downtown Ann Arbor District Library, 343 S. 5th Ave.