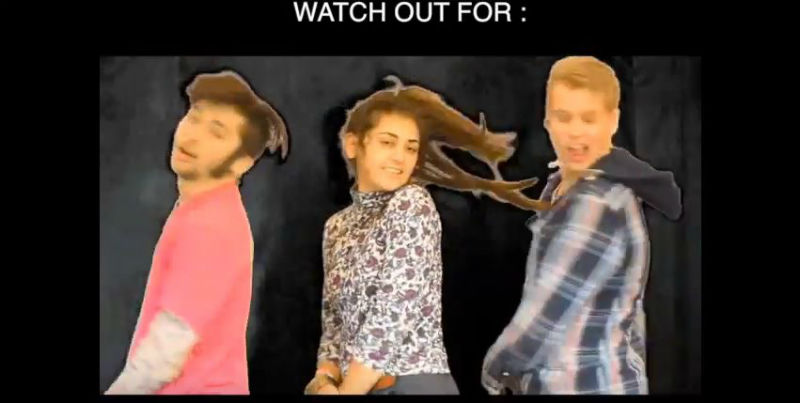 Have you ever heard a band and just been confused?

That's the effect Ann Arbor's Platonic Boyfriends had on me the first time I listened to the trio's debut album, Pee on These Hands.

Platonic Boyfriends will celebrate the release of Pee on These Hands (CD, cassette, Bandcamp) with a record-release show on Friday, Jan. 26, at a secret location (that you can find on the band's Facebook page). I emailed with Ahmad and Levine about the band's origins, influences, and the serious message behind their song "Don't Move."

Q: An older Platonic Boyfriends Facebook post stated, "We were born of Arbor Vitae in the sticky summer of 2015." Were you all living at the Arbor Vitae co-op together?Isaac: We were all living there at the time and in my recollection, we formed in order to play at the Vail House open mic series of that summer.
Noor: We started off as Platonic Boyfriends and the Mojo Twins for an open mic at the Vail co-op with the song "Yip Yip" -- created and rehearsed in one hour -- and we quickly added a theatrical performance of [the unreleased song] "P. on My Sherman 42." The announcer dropped “and the Mojo Twins” and I guess Platonic Boyfriends is easier to remember than the Powerpuff Girls' nemesis reference anyway.
Isaac: The first few shows we played were at the Vail house open mics and were very raw -- an electromechanical ferret died at the hands of a staged pianist, Prince's ghost came out of Klay's body, and my fellow bandmates did synchronized dances covered in barbecue sauce to the tune of a cassette recorded dance routine. At that time, we were real performance-art-oriented and the music was almost incidental. We got asked to play a non-open mic show at that time and that's when we started solidifying songs. All of our songs except for "Don't Move" and "I'm Stoned" are written in a fully collaborative fashion -- those two being exceptions because I came to practice with the lyrics for those fully written.
Noor: Our first few shows were at Vail open mics for our friends until we ended up getting asked to play an actual show at Metal Frat. I guess that’s when we became an actual band.

Q: Did you know when you started the group that you wanted to go for surrealist goofiness, or is this just how you write songs in general?
Noor: I think it is actually just a genuine manifestation of our collective ethos as friends and DIY artists and musicians trying to create spaces in Ann Arbor in which we could encourage experimenting and not taking ourselves too seriously. Platonic Boyfriends, in tandem with other performance artist friends and groups, became an outlet for us to glorify and embrace the absurdity, rawness, and vulnerability that exists in all of us.
Isaac: When we started the band we didn't know it was gonna necessarily be surrealist, but I think we set out intending to be more fun/entertaining than most of the things happening at open mics. We knew we wanted it to be more outrageous than an open mic.

Q: In the Boyfriends' music I hear elements of Ween, King Missle, early Camper Van Beethoven, ersatz country, and Frank Zappa if he were on K Records. Any of these appeal to you? Who else?
Noor: Ha, ha, that’s good stuff. Only thing I would add is that Thom Elliot once told us we sounded like Velvet Underground.
Isaac: I think Ween and ‪Camper Van Beethoven‬ are direct hits on our influence pool. I always thought ‪Frank Zappa‬ was a douche but I still would probably listen to a K Records Zappa record.

Q: Why Pee on These Hands as the album title? Why?!
Noor: You gotta pee? True camaraderie is finding consensual release and relief in the offered hands of your friends. Also, an emo blog told us they would feature us if we changed our album name, so we knew we had to keep it.

Q: Isaac, are you singing in a "Monster Mash" voice during parts of "Whats' Going On" -- you know, when not howling?
Isaac: That voice isn't necessarily a "Monster Mash" voice. At first, we were trying to do all our music in British accents, and most of my voices are me failing to do so and then having confidence in that failure.

Q: Is "Don't Move" the most serious song on the album? The only serious song? Tell me about its origin.
Noor: Alternative title: "(Bittersweet) Prom Song."
Isaac: This song is about artists moving to cities to be edgelords and the marketing that makes that seem benign. Usually, that blank slate marketing is coming from developers who have unconsensually taken root it in immigrant low-income communities to take advantage of blight-oriented tax credits granted by the state, in lieu of social security services for those in the low-income neighborhood. They attract white artists to make the neighborhood palatable to higher-income whites -- techies, bankers -- going forward. It is a collusion between local governments, state politicians, and developers to make it that way. At the time of writing, I was particularly frustrated with Ann Arbor-ites moving to Detroit and contributing to a cycle of colonialism there that will eventually make that place unaffordable. But really, more personally, that my friends were leaving. There is a recurring cycle of creatives coming here and saying, "There is no magic here," and then willfully creating a consensus that there is no magic here, and proceeding to bring their consensus of "no magic" to new avenues. It is very deadly, I find, this "No Magic" consensus. That said, Ann Arbor is very unaffordable for low-income people and creatives alike, so I understand why people leave and I intend to be more frustrated than judgemental about it.

The Platonic Boyfriends celebrate the release of their "Pee on These Hands" album with a record-release show Friday, Jan. 26, at a secret location in Ann Arbor; visit the band's Facebook page for more info.