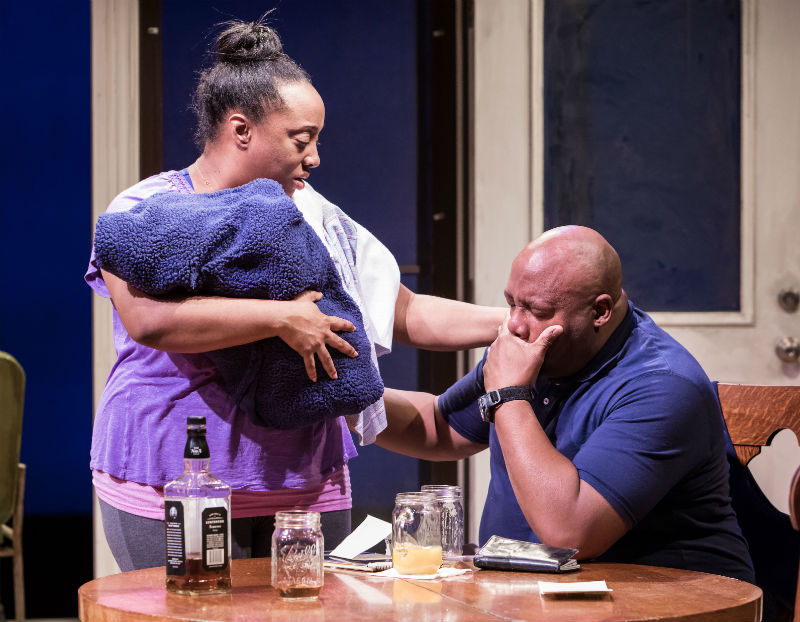 Titling a play Flint may seem somewhat presumptuous after all that's gone down in the beleaguered city in recent years. How could one summarize the city's water crisis and the devastation it's caused Flint residents in an 80-minute show? But playwright Jeff Daniels rises to the challenge impressively with his new show, currently making a world-premiere run through March 10 at his Purple Rose Theatre Company (PRTC).

Daniels' wisest decision -- and the main reason the show works as well as it does -- is to go very, very small and very, very personal in approaching an issue that has rocked thousands of peoples' lives. Flint follows two couples, one white and one black, in the latter couple's kitchen as they laugh, drink, fight, and contemplate bleak futures, all in a mostly uninterrupted stretch of real time.

Mitchell (Lynch R. Travis) and Eddie (David Bendena) met working on the GM line, where Eddie was a foreman. In the wake of the plant's closing, Mitchell works a minimum-wage job at Walmart, where his wife, Olivia (Casaundra Freeman), hopes he'll finally get promoted to floor supervisor. Eddie stumbles around in an unemployed, alcoholic haze, much to the chagrin of his wife, Karen (Rhiannon Ragland). Olivia serves as something of a grounding presence to the other three, driving a church van to support their new son, who cries frequently from the next room.

Daniels cannily structures the play to pick away at the scabs of our characters' deeply rooted resentments and insecurities, building maximum empathy with each of them in the process. The first 20 minutes or so are actually surprisingly light, containing plenty of the comic banter found in Daniels' best-known play, Escanaba in da Moonlight. But Daniels is just easing the audience into a relationship with these characters, getting us comfortable with them and making the explosive conflicts that follow that much more gut-wrenching. 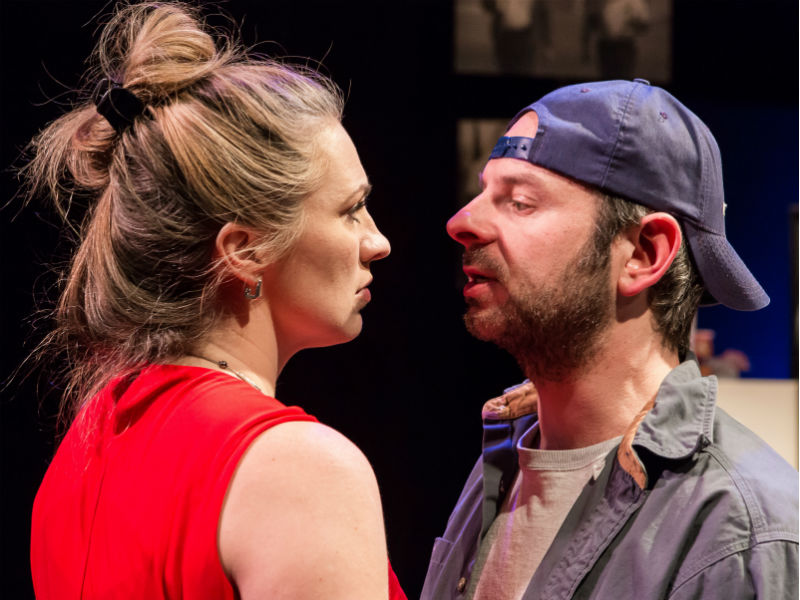 The entire scenario feels intensely, painfully real, thanks in large part to the excellent cast and the expert guidance of director (and PRTC artistic director) Guy Sanville. All four actors do remarkable work, but Travis is particularly affecting as Mitchell, communicating immense love, generosity, and hurt from behind frequently crossed arms. Bendena is also excellent as a character who at first seems to be the show's drunken comic relief but makes a slow, sad slide into revealing vicious, deeply ingrained racism. Costuming details like the heavily creased bill of Eddie's hat and Karen's ankle tattoo add important verisimilitude, and the set design is perfect with its dingy cabinets and the soft pneumatic whoosh of its screen door.

Although the water crisis is technically the subject of the show, the water itself is rarely seen, making it more of a shock each time a character runs a glass of tap water as yellow as the Budweisers they're drinking. The water issue is directly discussed only briefly in the show, another smart move on Daniels' part. He sets the show in September 2014, as news of the contamination was only beginning to break, and he's more interested in the long and demoralizing process of post-industrial decay that dragged Flint and its people down. For a quartet of characters who already feel as though they've hit bottom, the water crisis is just a sickening omen of further misery that's only begun to make itself known.

Flint's few missteps come when the mostly restrained production overplays its hand. Daniels expertly builds tension to the show's peak moment of conflict, but as written and staged the moment itself feels a bit unnatural and overcooked compared to the fine work done to get there. Likewise, the show's final moments (particularly its final lighting cue) put too fine a point on a story that otherwise doesn't make such an attempt to hold its audience's hand.

In a way, though, those two somewhat jarring moments only serve to highlight how well the rest of the show does its job. Daniels, Sanville, and the cast tackle a thorny tangle of economic, racial, and social issues that have created and influenced the situation in Flint, but overall they do so with great intelligence and skill. Flint is one of the first major works of fiction about the water crisis and it won't be the last, but its subtlety, grace, and insight on the subject will be hard to beat.

Regular performances of "Flint" are Thursdays through Saturdays at 8 pm, with Wednesday and Saturday matinees at 3 pm and Sunday matinees at 2 pm. The production runs through March 10 at The Purple Rose Theatre Company, 137 Park Street, Chelsea. Visit purplerosetheatre.org for more information.

A dope collection of hip hop…