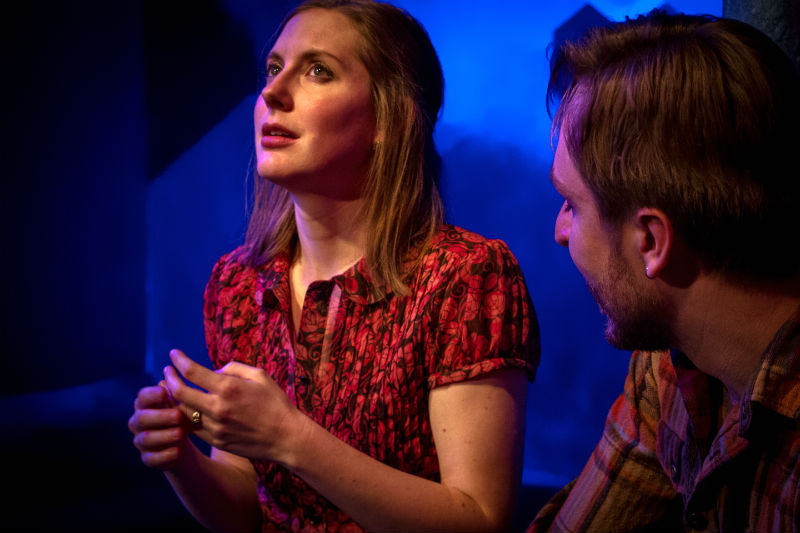 British playwright Nick Payne’s celebrated two-person play Constellations deals with quantum multiverses: multiple universes in which many different outcomes can come from the same, or a similar starting point. But don’t worry, you don’t need a Ph.D. in theoretical physics to understand and love the play, which is at Theatre Nova until Feb. 18.

Over the course of 70 minutes -- which almost feels too short -- we see earnest, charming beekeeper Roland (Forrest Hejkal) and spirited, loveable Cambridge professor Marianne (Meghan VanArsdalen) meet, fall in love, and experience small bumps, as well as a couple of seemingly insurmountable hurdles in their relationship. But because this concept of multiverses is the framework for the story, each of these scenes is repeated several times with slight variations; sometimes the weather is different, sometimes the tone of the scene is different, sometimes it’s the dialogue, or sometimes the dialogue is almost the same but the lines have been switched between the actors. The "what-if" moments in life, times when an outcome might have been different if just one little thing were tweaked or changed, are distilled into a series of beautiful, sweetly awkward, and sometimes nebulously foreboding sequences.

In Theatre Nova’s production, each new permutation is presented and whisked away, literally in a flash, signaled by a burst of stage lights, subtly and beautifully designed by Daniel C. Walker. At times the changes were also effectively marked by a little jingle of quiet folk music courtesy of sound designer Diane Hill.

One permutation I found particularly moving was one in which VanArsdalen and Hejkal repeated only in American Sign Language a scene they had just done in English. Despite the fact that it took us a moment to understand that we were watching a repeat of the previous scene, the actors’ signing was so clear, effortless, and poignant that instead of feeling jarring or out of place in the otherwise spoken-word show, the scene felt exactly correct and beautiful.

VanArsdalen and Hejkal bear the weight of Constellations on their shoulders, as actors do in every other two-hander. But because the plot doesn’t follow a linear pattern and jumps back and forth in time, each leap varying only a bit, they had the demanding task of shifting between subtly different versions of the same characters. They also had to maintain British accents throughout all of this jumping around, a task at which they mostly succeeded, only allowing their Michigan consonants and vowels to intrude every once in awhile, and never with any lasting damage. The two actors also work beautifully together; a script as intricate and ever-shifting as this needs implicit trust and sensitivity between actors, and Hejkal and VanArsdalen play off and rely on each other with tenderness and dedication.

All the action takes place in front of a striking backdrop of translucent honeycomb hexagons, backlit by an ever-changing array of colors, and the only other set pieces are a hexagonal bench wrapped around the pole that is a permanent fixture of Theatre Nova’s stage, and another moveable hexagonal stool. Designed by Hejkal, this minimalistic stage setup is aesthetically pleasing and allows the actors' work to shine with no distractions. The energy and flow never flagged throughout the duration of the play, a tribute to Carla Milarch’s sure-handed directing.

Despite the possible existence of multiverses, with many different possible outcomes, no matter when you go to see Constellations the outcome will never be anything short of stunning.