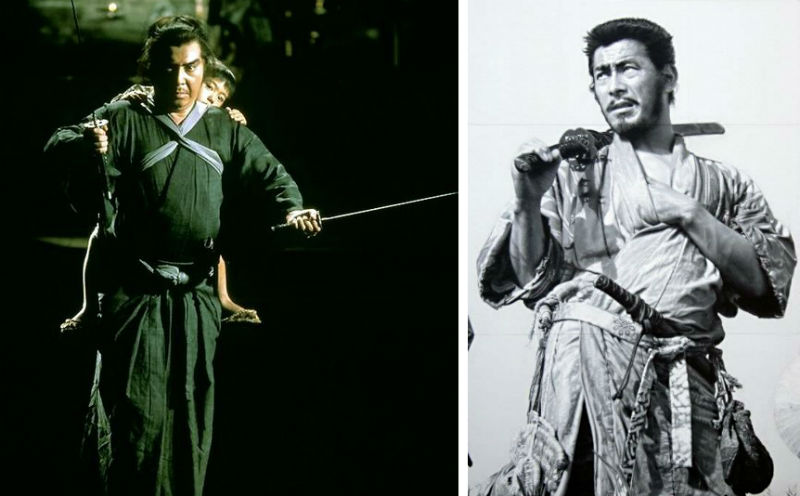 The Men Who Tread on the Tiger’s Tail
Monday, Feb. 5, 7 pm at the Michigan
1945 | Adventure/Drama/Thriller | 59 min | NR
A routed Japanese general, Yoshitsune (Hanshiro Iwai), and his group of loyal retainers are forced to flee from Yoshitsune’s own traitorous brother. En route to a safe zone, Yoshitsune and his bodyguards must pass through a heavily garrisoned mountain stronghold held by his brother’s forces. Hopelessly outnumbered, Yoshitsune and his guards, led by samurai Benkei (Denjirô Ôkôchi), decided that the safest way to pass through the checkpoint unharmed is to dress as monks.

Rashomon
Monday, Feb. 12, 7 pm at the Michigan
1950 | Drama/Mystery | 88 min | NR
Brimming with action while incisively examining the nature of truth, Rashomon is perhaps the finest film ever to investigate the philosophy of justice. Through an ingenious use of camera and flashbacks, Kurosawa reveals the complexities of human nature as four people recount different versions of the story of a man’s murder and the rape of his wife.

Seven Samurai
Monday, Feb. 19, 7 pm at the Michigan
1954 | Drama/Action | 207 min | NR
A samurai answers a village’s request for protection after he falls on hard times. The town needs protection from bandits, so the samurai gathers six others to help him teach the people how to defend themselves, and the villagers provide the soldiers with food. A giant battle occurs when 40 bandits attack the village.

Throne of Blood
Monday, Feb. 26, 7 pm at the Michigan
1957 | War/Tragedy | 111 minutes | NR
Returning to their lord’s castle, samurai warriors Washizu (Toshirô Mifune) and Miki (Minoru Chiaki) are waylaid by a spirit who predicts their futures. When the first part of the spirit’s prophecy comes true, Washizu’s scheming wife, Asaji (Isuzu Yamada), presses him to speed up the rest of the spirit’s prophecy by murdering his lord and usurping his place. Kurosawa’s resetting of William Shakespeare’s Macbeth in feudal Japan is one of his most acclaimed films.

The Hidden Fortress
Monday, March 5, 7 pm at the Michigan
1958 | Drama/Action | 139 min | NR
Japanese peasants Matashichi (Kamatari Fujiwara) and Tahei (Minoru Chiaki) try and fail to make a profit from a tribal war. They find a man and woman whom they believe are simple tribe members hiding in a fortress. Although the peasants don’t know that Rokurota (Toshirô Mifune) is a general and Yuki (Misa Uehara) is a princess, the peasants agree to accompany the pair to safety in return for gold. Along the way, the general must prove his expertise in battle while also hiding his identity.

Yojimbo
Monday, March 5, 7 pm at the Michigan
1961 | Drama/Thriller | 110 min | NR
A nameless ronin, or samurai with no master (Toshirô Mifune), enters a small village in feudal Japan where two rival businessmen are struggling for control of the local gambling trade. Taking the name Sanjuro Kuwabatake, the ronin convinces both silk merchant Tazaemon (Kamatari Fujiwara) and sake merchant Tokuemon (Takashi Shimura) to hire him as a personal bodyguard, then artfully sets in motion a full-scale gang war between the two ambitious and unscrupulous men.

Sanjuro
Monday, March 19, 7 pm at the Michigan
1962 | Drama/Thriller | 96 min | NR
Toshiro Mifune swaggers and snarls to brilliant comic effect in Kurosawa’s tightly paced, beautifully composed “Sanjuro.” In this companion piece and sequel to “Yojimbo,” jaded samurai Sanjuro helps an idealistic group of young warriors weed out their clan’s evil influences, and in the process turns their image of a proper samurai on its ear.

Red Beard (Akahige)
Monday, March 19, 7 pm at the Michigan
1965 | Drama | 155 min | NR
Aspiring to an easy job as the personal physician to a wealthy family, Noboru Yasumoto (Yûzô Kayama) is disappointed when his first post after medical school takes him to a small country clinic under the gruff doctor Red Beard (Toshirô Mifune). Yasumoto rebels in numerous ways, but Red Beard proves a wise and patient teacher. He gradually introduces his student to the unglamorous side of the profession, ultimately assigning him to care for a prostitute (Terumi Niki) rescued from a local brothel.

Lone Wolf and Cub: Sword of Vengeance
Tuesday, March 20, 7 pm at the State
1972 | Drama/Action | 89 min | NR
The first in a series of six films in the Lone Wolf and Cub series, the film tells the story of Ogami Itto, a wandering assassin for hire who is accompanied by his young son, Daigoro.

Lone Wolf and Cub: Baby Cart at the River Styx
Wednesday, March 21, 7 pm at the State
1972 | Drama/Action | 81 min |NR
While wandering through the wilds of Japan with his 3-year-old son, Daigoro (Akihiro Tomikawa), assassin-for-hire Itto (Tomisaburô Wakayama) finds his next assignment -- he’s hired to kill a merchant intent on revealing corporate secrets. On Ogami’s tail, however, is a trio of female ninjas who have been sent to kill him and his son. When Ogami is wounded in battle, the toddler rises to the occasion and helps nurse his father back to health in time for a second sword fight.

Lone Wolf and Cub: Baby Cart to Hades
Friday, March 23, 7 pm at the State
1972 | Action/Adventure | 81 min | NR
Itto volunteers to be tortured by the yakuza to save a prostitute and is hired by their leader to kill an evil chamberlain.

Lone Wolf and Cub: Baby Cart in the Land of Demons
Saturday, March 24, 7 pm at the State
1973 | Drama/Action | 89 min | NR
Five swordsmen hire Ogami, each revealing a portion of his mission as they are defeated in this fifth entry in the Lone Wolf and Cub series. After defeating the swordsmen, Ogami discovers his mission is to save a clan’s honor by killing its royal family.

Lone Wolf and Cub: White Heaven in Hell
Sunday, March 25, 7 pm at the State
1974 | Action/Adventure | 83 min | NR
In the sixth and final film of the series, the conflict between Itto and the Yagyu clan is carried out.

Kagemusha
Monday, April 2, 7 pm at the Michigan
1980 | Drama/Action | 180 min | PG
Kurosawa’s lauded feudal epic presents the tale of a petty thief (Tatsuya Nakadai) who is recruited to impersonate Shingen (also Nakadai), an aging warlord, in order to avoid attacks by competing clans. When Shingen dies, his generals reluctantly agree to have the impostor take over as the powerful ruler. He soon begins to appreciate life as Shingen, but his commitment to the role is tested when he must lead his troops into battle against the forces of a rival warlord.

Ran
Monday, April 9, 7 pm at the Michigan
1985 | Tragedy/Action | 152 min | R
Kurosawa co-wrote, directed, and edited this adaptation of Shakespeare’s King Lear -- considered by some to be his “last great masterpiece.” In Medieval Japan, an elderly warlord retires, handing over his empire to his three sons. But he vastly underestimates how the new-found power will corrupt them and cause them to turn on each other … and him.

The 47 Ronin, parts 1 & 2
Monday, April 16, 7 pm at the Michigan
1941/1942 | Action/Adventure | 241 min | NR
Produced over a two-year period, Kenji Mizoguchi’s version of the oft-filmed Seika Mayama story The 47 Ronin was too big to be confined to a single film. Thus, it was released in two parts, each running between 105 and 115 minutes. The story begins in feudal Japan in December of 1701, when warrior leader Lord Asano is tricked into committing Hara-Kiri. Oishi, Asano’s loyal clansman, holds the wicked Lord Kira responsible. 14 months after Arano’s death, Oishi assembles 47 loyal Ronin (samurai) to exact vengeance. Mizoguchi abandoned his usual fascination with modern-day social problems in favor of epic patriotism (the film was made while Japan was still winning World War II.

For tickets to "Enter the Samurai" and "Lone Wolf and Cub" series, visit michtheater.org. Click here to see all the Samurai films in AADL's collection.