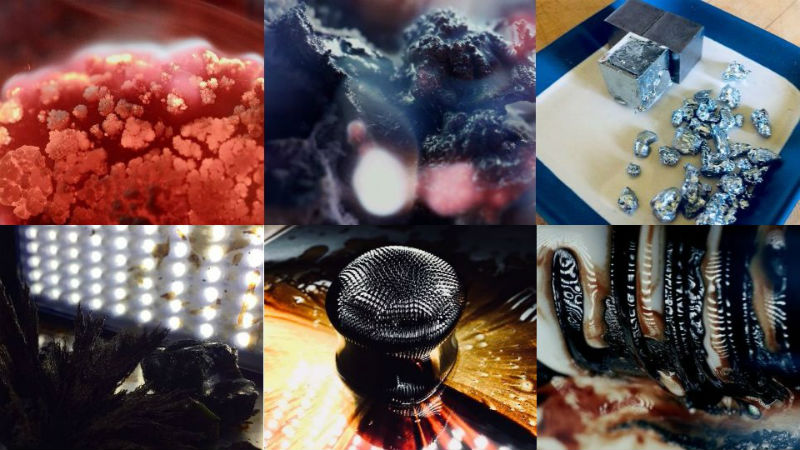 Sean Curtis Patrick's film Exo is a sumptuous work of art. It also happens to be a music video for Bana Haffar's song of the same name from her recent Matiere 12-inch single, but it could slot easily into a multimedia exhibition at a museum.

"Exo," the song, is filled with clicks, blips, buzzing, and bells that eventually build into a spiraling passage of ambient arpeggios. Haffar recorded the song live, with no overdubs, using a custom-built Eurorack synthesizer featuring modules by Make Noise, whose in-house record label put out the 12-inch. The song is abstract and lovely, just like Patrick's video.

Patrick performed at the Mini MoogFest in November 2017, and I spoke with him back then about his musical plans for that day; the interview below talks about his background as a multifaceted artist -- he also works in ceramics and is a graphic designer -- and the inspiration, research, and details behind the gooey and gorgeous images in Exo. (I embedded the video in this post, but you should watch it full screen and use good headphones for the full effect.)

Q: Tell us a bit about yourself.
A: My name is Sean Curtis Patrick. I am originally from Traverse City, Mich., but came back to Ann Arbor a few years ago from Palo Alto, Calif., and Austin, Texas, before that. I guess for the people who do know me in town, I am mainly known for some music videos and some album covers.

I do make music on my own, though, which is what originally inspired me to make videos in the first place. The music I make is under my own name or Assembler/Responder. It is not like its well known or even well listened to but it has been one of the most rewarding things in my life. Every once in a while, I get little notifications about one of my songs being played on a radio station in Moscow or hearing my name in some show in Turkey. It is always super unexpected when those things do happen and I always wish I could go back and time and show that to the 18-year-old me in the dorm room with the Telecaster trying to understand a F#+9 chord. I think I would say to him, "You'll never make a living from it, but you will have a lot of fun and meet amazing people."

Q: How did the Exo project come about? Is because both you and Bana Haffar are associated with Make Noise?
A: A few years ago, I received an email from the founder of Make Noise Music, Tony Rolando, asking if I was interested in making a few things for his fledgling label. I have been the main visual artist ever since. It is the best art job I have ever had.

I don’t know exactly how Bana's record came about, but I was thrilled when it hit my inbox. That went like this: "Yay! New project! Whoa, what is this music?! It is amazing!" I had been aware of Bana for a few years but don’t know if she was aware of my work. I live here in town and she lives in Los Angeles so we haven't even met in person yet! So, it was really arranged through my history with the label.

I had the idea for the video during the literal first seconds of the song. I was on a morning walk and I saw the [record] cover in my mind -- which is like a solidified gooey sculpture cast in green light made by Bana -- and I imagined it mutating and transforming into a grid-like metal cube floating in space. I don’t know why I saw that upon hearing it; it just came to me. A few months later I was asked if I wanted to make a video and I was able to quickly shoot back that I had an idea! It pretty much turned out exactly as I imagined it; something I haven't ever had happen to this degree.

Q: Did being an electronic musician yourself give you an insight into what would work for a video for an abstract song like "Exo"?
A: I don't know if being an electronic musician gave me the insight, but what did was being a fan of electronic music. Specifically, Warp Records from the late 90's to probably 2006. That label changed my life in so many ways. So many new sights and sounds were made available to me that previously would have never been absorbed. Some of my favorite musicians of all time were on that label: Boards of Canada, Aphex Twin, Autechre, Broadcast, Squarepusher, Clark -- goes on and on. And some of my favorite videos came from the label, too.

I am a really lucky guy in a lot of things in life, but having the two best mates I did while I was in college made me the weirdo I am today: Dan Streeting and Trevor Edmonds. Two of my heroes and still my best pals. They exposed me to all of this alien stuff when I really needed it most. So hard to remember what finding new music was like before the internet. Makes me sound ancient but it really wasn't that long ago. I can't begin to tell you how many late nights there were in one of our college apartments blasting IDM imports that cost a fortune or watching the most absurd music videos made by esoteric directors on Region 2 DVD's we somehow tracked down. It taught me the important lesson that I could make the weirdest stuff I could imagine and there would be someone out there that will like it. So much of what I make now germinated from that era of my life.

Q: The film feels like something that should be on display in a museum for a multimedia exhibition. Any plans for it to be seen in that venue?
A: I made this as a film primarily to be seen in larger venues. I can't tell you how soul-rending it is to pour over something for six months or a year [only] to see it on YouTube -- and with that only a few hundred views. It makes you question why you tried so hard, which is dangerous for whatever the next project is. So, I make everything with the idea that it could show in a theater and should live on for many years in terms of format and aesthetic. Actually, to rally against this very idea, my previous film, Laughing Stock, was exclusively on offer to shows or festivals who could show it in a theater during a film program or whatever. No takers yet but a few interested parties. It will never be on YouTube or streaming online. Some things look great on phones; most of my stuff doesn't it seems. I would love to participate more in film festivals but would rather figure out something else as I lack the competitive element needed to thrive in that environment. Exo, though, will be shown really large sometime in the summer in Asheville, N.C., home of Make Noise Records. I am working on a letterboxed version of it, too.

Q: I like in Exo how sometimes the bubbles or the drips are in sync with the beat, but it doesn't beat you over the head. One drop might sync with a beat, but your brain doesn't get that same satisfaction again in any kind of pattern that I could detect. Yet between those direct-hit syncs, there were inferences of the beats and images lining up, or because it was a bubbling flow, your brain would make the connection between the musical and visual rhythms. Was that kind of visual-audio rhythmic puzzle part of your thinking?
A: I am so happy you caught all of the rhythmic cutting. That took forever. Just for context, some of the shots in the film took an hour or more to just set up. Then, in the final cut, it is in there for less than a second. I think my final count was 450 scenes shot. I think 300-plus are in the final cut. I always try to pace stuff appropriately but it is hard, including with music as dense and as polyrhythmic as "Exo" is. There is this great quote attributed to Miles Davis about "music is the space between the notes." I have always loved that sentiment and have always kept that in mind with my editing and composition, so sometimes a cut comes out of nowhere but feels right.

Q: How did you get the images in "Exo" -- did you create them by doing extreme close-ups of real-life objects and liquids, or was it all done in a computer?
A: This project really exhausted my knowledge of the science of filmmaking. I had to do a lot of amateur science and had to research so many different things. Here are a few things I needed to figure out: How would a non-Newtonian fluid react under heat, intense vibration, etc.? How many lenses or pieces of glass can you put on a camera before the image is unusable? How viscous could a magnetic oil be? Could I light all of it on fire? How do I corrode an oil? What is the 4K sensor picking up that is invisible to me? How do I accentuate that? What would a blinking human eye miss in terms of movement across the screen? What is the melting point of this but not interfere that next to it? What's the perception of time at a microscopic scale? What frequency makes sand float? What is a nontoxic liquid metal that I could form like a putty, then melt into a liquid but then also freeze in place permanently?

So much research. I have never read so much for a project. All of it is real life objects and materials. Most of my supplies came from Amazon, which I find kind of hilarious. No CGI used. It just took a lot of brain power and effort. I hope that comes through in the final product. I would like to publicly thank my partner, Allie, for being patient and supportive when I was making loud sounds and coming upstairs covered in oil.

Q: What's next for you artistically?
A: I have a few things coming up. I got into ceramics in the last year and has been a pretty transformative pursuit for me. Hope to do more of that. I applied to a few artist-in-residency programs, which would be pretty engrossing and different from my usual thing. Also trying to line up a few shows in Japan in the autumn. Hope that works out!

For more of Sean Curtis Patrick's art, video, and music, visit his website, Instagram, Bandcamp, YouTube, and Facebook pages. His most recent album, "Loam," came out in January; it's a beautiful, blissful meditation he created with Trevor Vincent Edmonds.