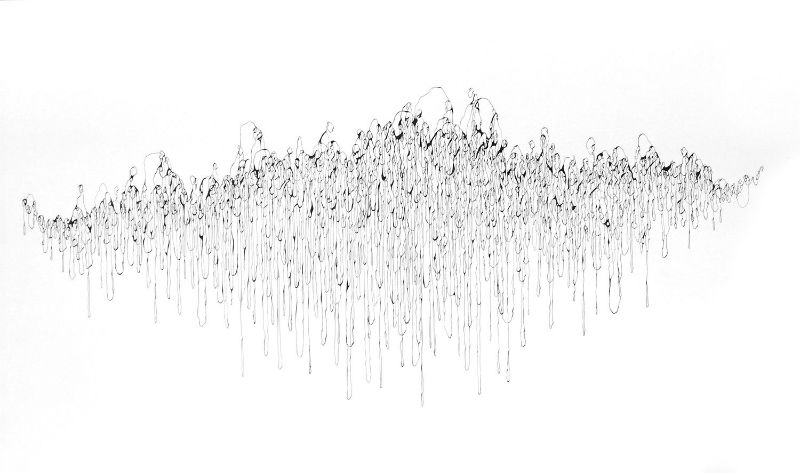 What is drawing now?

This is one question the Art Now: Drawing exhibition at the Ann Arbor Art Center asks its viewers.

As it turns out, drawing is more than just ink or graphite on paper.

Drawing can be sculptural, as already proven by the inclusion of U-M Professor Emeritus Larry Cressman’s “nature drawings.” And many large-scale works dominated the Art Center walls, engaging in 3D space when generally one thinks of drawing as exclusively 2D or maybe just slightly 3D in the form of a relief drawing.

Some works in Art Now: Drawing reimagined the boundaries between sculpture and drawing, while others questioned what techniques can considered “drawing,” from creating works in computers (terrain usually considered graphic design) to creating works with new technologies, such as the 3D drawing pen, as well as addressing the abstract on an eclectic range of surfaces and with techniques ranging from aquatint (a process generally considered part of printmaking) to charcoal on paper.

The Ann Arbor Art Center’s website acknowledges the diversity in approach to drawing, whether traditional or radically innovative, stating:

While some artists are heavily based in traditional modalities of drawing, using drawing in preparatory ways, other artists will test the limits of what defines a "drawing" and push beyond the conventional boundaries, allowing for hybrid processes to be employed and combined. The use of such advances includes digital imaging, sculpture, performance, video, installation, painting and printmaking … artists who move across disciplines, using "drawing" as their foundation, with an emphasis on investigative and exploratory ways of drawing.

Juried by Perry Culper, an architect and associate professor of architecture at the University of Michigan, it is no surprise the show includes works with various nods to architectural drawing. The Art Center also lists his interests in “the generative potential of architectural drawing, the outrageously different spatial opportunities of diverse design methods and in broadening the conceptual range by which architecture contributes to our cultural imagination.” Culper's interests are evident in the works he has selected for the show, many of which step outside of the boundaries of traditional art disciplines, engaging the audience with works that are contemporary in media, subject, or execution.

Some examples of works that push the boundaries of what we conceptualize as drawing can be seen throughout the gallery. Arienne Zimmerman's multimedia work Dissections was created with Linen, epoxy, vinyl, Dura-Lar, spray paint, and oil paint marker. This piece immediately draws attention to itself due to its large scale and subtle but captivating tonal and structural variations.

Lavinia Hanachiuc's Silkie3 is a 3D work created with 21st-century technology: the 3D drawing pen. The artist created a drawing in three dimensions with similar technology to a 3D printer and the resulting drawing is an anatomically inspired piece with abstract motifs. Most viewers would likely consider the piece a sculpture. It is a sculpture, but it is also a drawing.

As I looked at each piece in the gallery, another visitor exclaimed to me that the exhibition had a wide range of work on display. I nodded in agreement, though I was unsurprised, as the Art Center’s past exhibitions have done an excellent job of representing diverse artists and works, while at the same maintaining a cohesive theme for each show. Drawing could be a potentially limiting category, but the Art Center proves once again that it's always in thick of exploring current trends in contemporary art. 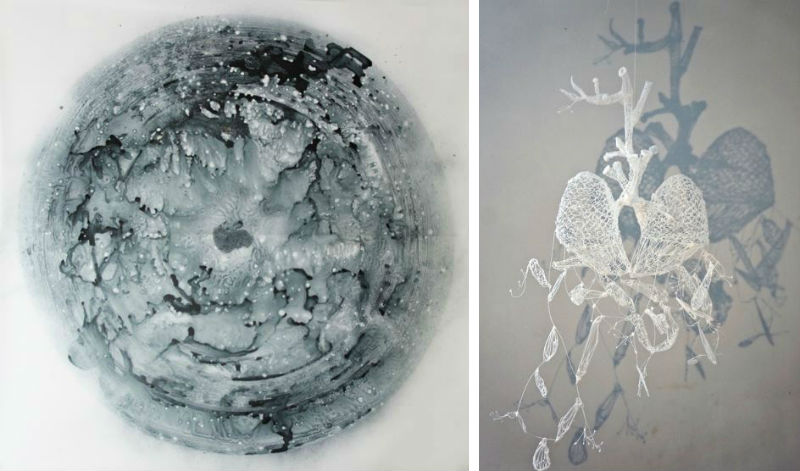 The gallery awarded five works of art with honors:

"Art Now: Drawing" is at the Ann Arbor Art Center, 117 W. Liberty, through March 17. The exhibition is free and works for sale can be seen here. Vist annarborartcenter.org for gallery hours and more info.