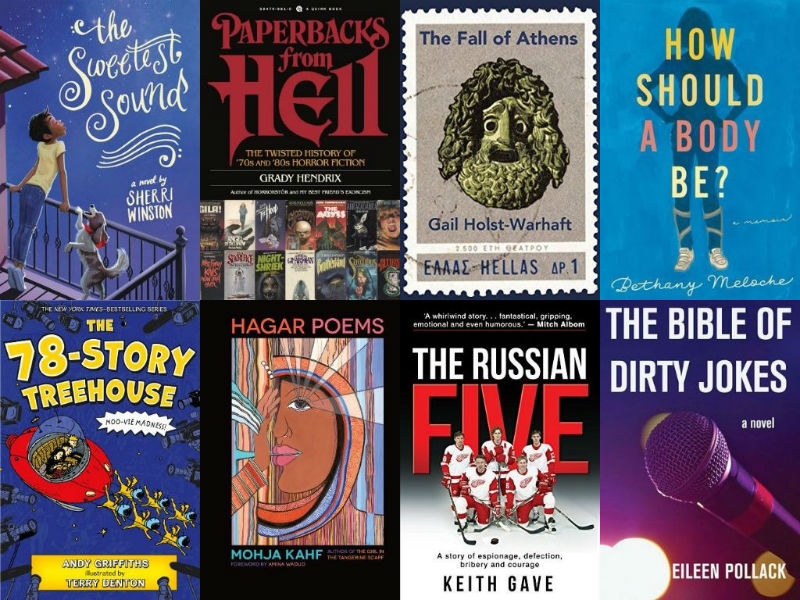 In fact, so many authors pass through the area that sometimes it can be hard to keep track of who is speaking and when and where. To help guide you, Pulp curated a highlights list of March 2018 author events.

Sherri Winston
➥ Thu., March 1, 7 pm • Ann Arbor District Library Downtown Library
Winston will share stories about her writing process and about how she is drawn to strong female characters. She will also show how she draws inspiration from real-life women to create her fictional work, which includes middle-grade books President of the Whole Fifth Grade and The Sweetest Sound.

Tim Fielder
➥ Fri., March 2, 7 pm • Nicola's Books
Fielder is author and illustrator of the graphic novel Matty’s Rocket: Book One!, an ongoing galaxy-spanning adventure tale about the journeys of a space pilot.

Chris McCormick
➥ Tue., March 6, 7 pm • Literati
McCormick celebrates the paperback release of his book Desert Boys, a series of powerful, intertwining stories that “traces the development of towns into cities, of boys into men, and the haunting effects produced when the two transformations overlap.”

Moriel Rothman-Zecher
➥ Thu., March 8, 7 pm • Literati
Rothman-Zecher has recently penned her debut novel, Sadness Is a White Bird, about a young man preparing to serve in the Israeli army while also trying to reconcile his close relationship with his two Palestinian friends.

WCED Lecture -- Never Remember: Searching for Stalin’s Gulags in Putin’s Russia with Masha Gessen and Misha Friedman
➥ Fri., March 9, 7 pm • Welser Hall on the U-M campus
Gessen is a Russian-American author, journalist and activist and Friedman is a photographer. The two have explored the history and memory of the Gulag in their travels across Russia. Books by the authors will be available for purchase at the event.

Eileen Pollack
➥ Tue., March 13, 7 pm • Literati
Pollack will share excerpts from her new novel, The Bible of Dirty Jokes, which tells the story of a failed stand-up comic who must find her missing brother in Las Vegas.

Bethany Meloche
➥ Thu., March 15, 7 pm • Ann Arbor District Library Downtown Library
Meloche is the author of the memoir, How Should a Body Be?, a coming-of-age story about growing up in Michigan and uncovering a horrible new truth in an old family secret. She is also a storyteller and motivational speaker.

Andy Griffiths
➥ Sat., March 17, 11 am • Nicola’s Books
Griffiths is the author of the bestselling book The 78-story Treehouse and of the other books in the Treehouse series. The books are filled with slapstick humor and feature illustrations by Terry Denton.

Sweetland’s Writer to Writer with Susan Scott Parrish
➥ Tue., March 20, 7 pm • Literati
Sweetland Writing Center’s Writer to Writer series offers the public the opportunity to hear directly from U-M professors about their challenges, processes, and expectations as writers and as readers of others’ writing. This month Susan Scott Parrish is the featured professor. She teaches in the English and Program in the Environment departments at U-M.

Gail Holst-Warhaft
➥ Thu., March 22, 7 pm • Literati
Literati is partnering with the University of Michigan Modern Greek Program to welcome poet Holst-Warhaft, who will share her new book, The Fall of Athens. The book combines present observations of Athens with portraits of Greek musicians and writers.

Mohja Kahf
➥ Fri., March 23, 4 pm • Rackham Auditorium
Poet and professor of comparative literature at the University of Arkansas Mohja Kahf will share her poetry on Syria and exile at this event. Her new book of poems is Hagar Poems.

Jeff Kass
➥ Sat., March 24, 4 pm • Nicola’s Books
Kass has penned his debut thriller, Takedown, set in Ann Arbor! The novel is an “astute commentary on the darker side of education reform wrapped in a gripping adventure.” Kass is an English teacher at Pioneer High School.

Laura Joh Rowland & Nancy Herriman
➥ Sat., March 24, 2 pm • Aunt Agatha's
Last time Rowland was in town, she shared a stage with fellow Michigan-born mystery writers Doug Allyn and Loren D. Estleman (who makes his own appearance at Aunt Agatha's on April 7). This time Rowland is joined by Herriman, another Michigander. But despite their Midwest roots, both writers have new books set in England. Rowland will discuss her new Sarah Bain novel, A Mortal Likeness, set in Victorian London. Herriman will talk about her new thriller series set in Elizabethan England, which debuts with Searcher of the Dead.

Paperbacks From Hell with Grady Hendrix
➥ Thu., March 29, 7 pm • Live
In the early '70s, three books changed horror forever: Rosemary's Baby, The Exorcist, and The Other. The first horror novels to hit bestseller lists since 1940, they opened the floodgates for an avalanche of horror paperbacks to pour onto supermarket shelves throughout the '70s and '80s until Silence of the Lambs in the early '90s. Writer Grady Hendrix delivers a mind-melting oral history of this now forgotten world in Paperbacks From Hell. There is no cover charge for this event. Doors open at 6:30 pm, ages 21 and up.

Michael Gustafson & Oliver Uberti share Notes From a Public Typewriter
➥ Fri., March 30, 7 pm • Literati
Michael Gustafson and his wife, Hilary, owners of Literati, provide a public typewriter for anyone to use when they visit the store. The collection Notes From a Public Typewriter collects over four years of their favorite notes from that typewriter and combines them with essays and photos that are an ode to the bookstore community.

Sigh. WE ARE AN ANN ARBOR…

Sigh. WE ARE AN ANN ARBOR BOOKSTORE! WE HAVE GREAT EVENTS! WE have been here for 25 years!

Join us Saturday, March 24 at 2 p.m. when Laura Joh Rowland will talk about her new Sarah Bain novel, A Mortal Likeness, set in Victorian London; and Nancy Herriman launches a new series set in Elizabethan England with Searcher of the Dead.