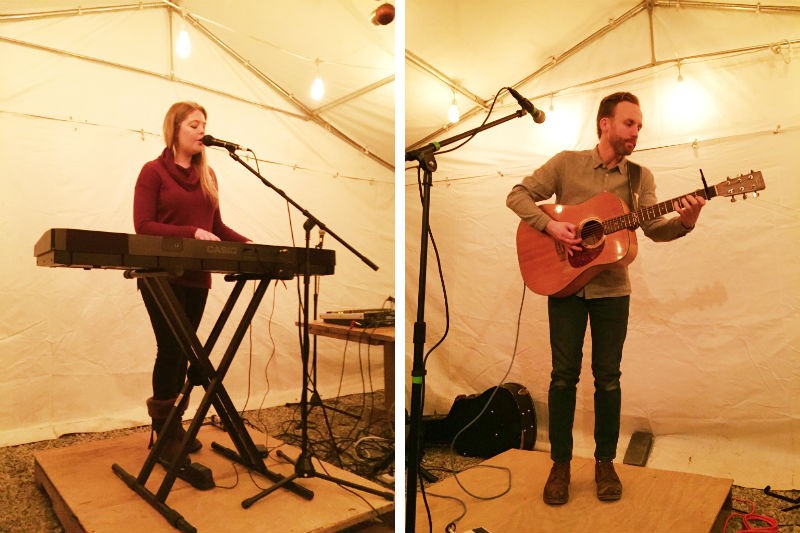 Katie Pederson and Tim Monger are two of many area artists who have participated in Songwriter Sunday at Cultivate in Ypsilanti.

Many of us wonder what the creative process for an artist is like. How do they come up with ideas for their songs? What inspires them? How do they start to write and compose an original song?

Beginning in November 2017, Cultivate Coffee and Taphouse has held Songwriter Sunday bi-weekly, offering local artists the chance to share their songwriting and creative process, and giving interested members of the public the chance to answer some of those questions.

Jenny Jones, music manager at Cultivate, says that she first came up with the idea for the music series “as a way to keep a promise to singer-songwriters who have sent me inquiries about performing in Cultivate’s space.” Cultivate has such a wide variety of events happening each day that the space can’t always accommodate solo performances. Knowing that people are often curious about the process of songwriting, Jones decided to offer performers the chance to join forces to share their own creative experiences.

Each event features three different songwriters who play, tell stories, and answer questions for 30-45 minutes each. Jones says that both the singer-songwriters and people who attend the event have been delighted with it. “Some of the listeners have great questions for their local songwriting heroes and we have started to see people return for other sessions,” she says. “Most of all, people come to hear the music and hear the thoughts behind it. The feedback has been that people and the songwriters are grateful for the opportunity to witness and share [the music].”

The Songwriter Sunday on March 4 features Jen Sygit, Sam Corbin, and Beach Daisy, a duo. Sygit, who was invited to play Songwriter Sunday after performing in Ann Arbor band The Ragbirds’ annual Christmas show, believes that “any tradition that showcases and honors songwriting is important.” She’s been a musician “pretty much from birth,” she says. She began writing songs in grade school on her parents’ organ in their basement and took voice lessons and played trombone through high school. She’s only expanded her musical repertoire since then, honing her guitar skills and learning the clawhammer banjo./p>

Now, Sygit describes her own music as “a mix of folk, Americana, acoustic blues, and old-tyme.”

Bekah Wallace, co-founder of Cultivate, says that the Songwriter Sunday programs suit Cultivate’s goals for their space perfectly. “Cultivate exists as a community space around three values: craft, community, and cause,” she says. “Events like these allow us to share all three within our space, honoring the craft of the songwriters in community space while supporting the work that Cultivate is doing in the community.”

The Songwriter Sunday program, which takes place in the beer garden, is just one part of Cultivate's local-music-focused programs. Sundays in the Garden, which features partnerships between Michigan breweries, local musicians, and nonprofit organizations will continue in 2018 after launching last year. The space also hosts weekly jazz evenings on Thursdays featuring artists such as Plenty Rhythm, Steve Somers, the Liberty Street Vipers and Al Bettis. Jones says that they’ll start to have more music in the beer garden on Friday nights, too, as the weather gets warmer.