From Bach to Rock: California Guitar Trio at The Ark 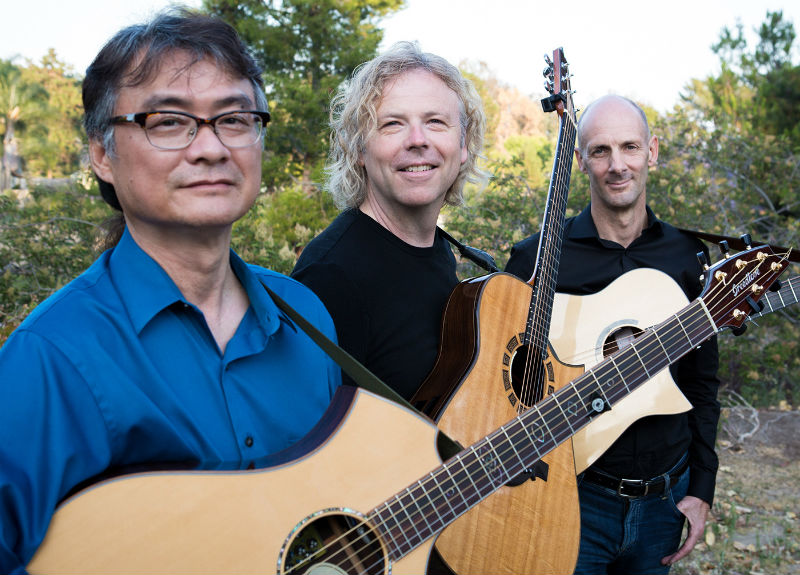 If you are unfamiliar with the artful pyrotechnics of the California Guitar Trio, simply buy a ticket to their upcoming show at The Ark on March 11 and get ready to have your mind blown.

California Guitar Trio is comprised of Bert Lams, Hideyo Moriya, and Paul Richards, who combine exquisite musical chops with an omnivorous, multi-genre approach to music. On stage and on their albums, CGT includes all manner of acoustic cover versions as well as dazzling original material. Whether it's rock, classical, jazz, country, or surf music, CGT perform with style and skill that’s hard to match elsewhere.

I’ve been a fan of the Trio since the beginning of their career, so it was a real treat to catch up with band member Paul Richards by phone in advance of the group’s Ark date on Sunday.

Q: You and your fellow bandmates Bert Lams and Hideo Moriya have been together a long time. What’s the secret to everybody staying on good terms all these years?
A: We formed the group in Los Angeles in ’91 and are celebrating our 27th year. One thing that really helped get us started out in the right way is the work we did together with [King Crimson founder] Robert Fripp on the Guitar Craft courses. Those courses and seminars established a good way of working together and helped us get along better. But the friendship side of it has been really important, too. Both Bert and Hideyo are really good guys and whenever we have issues or problems all three of us can just get through it. You have to work through things, kind of like a marriage. We always find solutions to any difficulties we’ve had along the way. The main thing is that we still really enjoy playing music together.

Q: Outside of the technical aspects of learning guitar, what else did you learn from Robert Fripp at the outset of your career?
A: There’s so much there, it’s hard to answer in a short interview. Robert has a very unusual way of teaching and sharing his experience and knowledge. When I first started studying with Robert I was attending the University of Utah in the Jazz Guitar Program; that was great and I learned a lot. But when I arrived at my first Guitar Craft course one of the first things we did each morning was a kind of meditation for half an hour. There was an instructor who would lead us through a reflective mediation where you bring attention to your body and relax the different parts of your body, learning to hold your focus for longer periods of time. Robert would say things like, “In order to learn to do something, we first have to learn to do nothing.” Robert has a very spiritual side to him and his work is all self-practical, all based on learning to play well and learning to get along with each other.

Q: The track off your latest album, Komorebi, that first caught my ears was your brilliant version of the Dave Brubeck Quartet classic "Blue Rondo à la Turk." What made you decide to cover that one?
A: We were on tour in Italy and we did a concert in Rome at a beautiful outdoor park. After the show, we were headed back to the hotel and the concert promoter and Italian touring agent were in the front seat driving us back and were chatting about something very excitedly and the only words I could make out were Brubeck and California Guitar Trio. When we got back to the hotel they told us [in English] that we should play "Blue Rondo à la Turk" from Dave Brubeck. They explained that it was the perfect piece for us, that it had the classical element, the jazz element, the odd time signatures, and the shifting of meters and all things that are part of the Trio’s interests and things that we could do well. The more we dove into that piece we discovered that they were right. Since then it’s been a favorite to play live.

Q: Besides the Brubeck cover and other takes on tunes by The Beatles, Beach Boys, Buck Owens, and The Shadows, Komorebi includes a number of originals, including some tracks you wrote yourself. Can you tell us what inspired one of those tunes?
A: Almost five years ago my wife and I moved to Los Angeles, and then our beloved dog Maya -- who we had for 11 years -- unexpectedly passed away. After having such a personal struggle and then getting to the point where you feel like you can be OK again -- despite the difficulties - that inspired the main ideas for the song "Euphoria." Around that same time, I met Petra Haden when we were doing a music project up in Seattle with some other Robert Fripp students. She is such an amazing singer and a really great person and I invited her to sing on a couple tracks on the album. She just loved that tune! I didn’t give her any instructions; I just let her do what she wanted. She picked up on the intricacies of that piece and brought it out with her beautiful vocal parts, and also we had Tony Levin playing Chapman Stick on that piece, so that’s a special one for me.

Q: How you decide which songs --- original and covers --- to put on your albums? Does that process get a little intense between the three of you in the Trio?
A: Every tune has its own story behind it. It’s just a process of consensus between the three of us. That’s never been much of an issue for us. If there’s any one of us that’s not interested in something it’s easy for the other two of us to let it go, but that doesn’t happen very often. We’re all three so open-minded musically and love so many different kinds of music there isn’t much you could throw at us that we wouldn’t be at least willing to give it a try.

Martin Bandyke is the morning drive host on Ann Arbor’s 107one, WQKL-FM. He also helms the AADL podcast Under Covers.