Below the Borscht Belt: U-M's Eileen Pollack & her "Bible of Dirty Jokes" 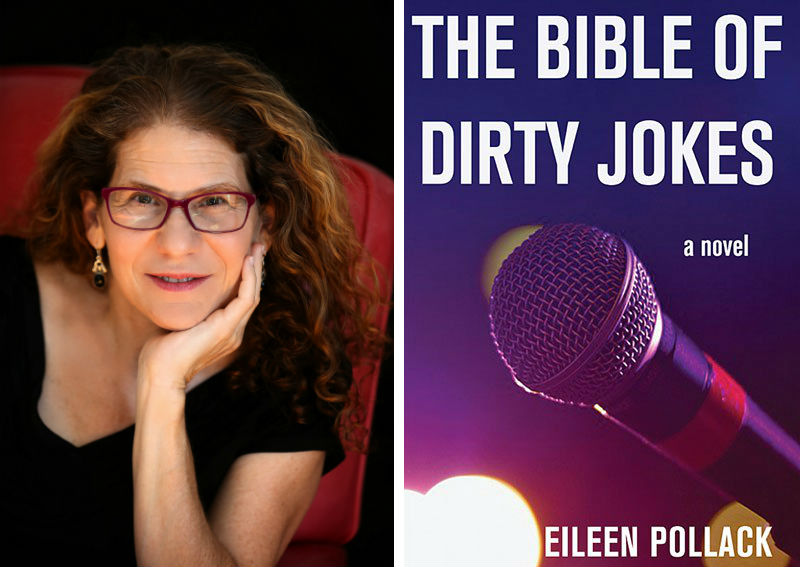 U-M professor Eileen Pollack grew up in the Borscht Belt, which is where her new novel takes place. Photo by Michele McDonald

A cousin who runs a Vegas strip club? A beloved brother who goes missing while in Vegas? A late husband who wrote dirty jokes for a living? A heroine with a failed stand up career who must save the day?

These colorful characters make up the new book The Bible of Dirty Jokes by U-M professor Eileen Pollack, but the roots of the novel come from a different era.

“I grew up in a hotel in the Borscht Belt," Pollack says. "It's really where stand up comedy got its start. Famous comedians would perform there, creating this sort of culture, and that’s what I knew.”

The hotel was owned by her grandparents, and most of the comedians who came through were men, Pollack says, “But there were some pioneering female comics so I always had it in my head to try standup.”

Ketzel Weinrach, the protagonist of Dirty Jokes, likewise had a desire to be a standup comic that was fueled by memories of growing up in the Borscht Belt. The events in the book that stalled Ketzel’s career mirror the realities for female comedians.

"Before the #metoo movement, we knew how hard a life in comedy is on women and about the harassment that they face," Pollack says. "So the idea of a woman who really wanted to be in stand up but couldn’t take the harassment really appealed to me.”

In addition to the larger-than-life characters of Ketzel and her family, Dirty Jokes also features the Jewish mob known as Murder Inc. While Michiganders know of the legendary Jewish mob The Purple Gang, they might not know about the New York version.

“Murder Inc. came along just before The Purple Gang became really well known,” Pollack says. “They worked as hitmen with what would become the mafia. They would fly around the country and do the work they were paid to do and then they would hide the bodies in the Catskills. They would put the bodies in their trunks and come up … and dump them in the rivers or woods. When my father and I would go out rowing on the lake he would tell me, ‘There are a lot of bodies down there!'”

Family stories inspire much of Pollack’s work. Her father grew up in the same neighborhood in Brooklyn where Murder Inc. operated and shared many stories with his daughter. Among them was how the mob would install illegal slot machines in the Borscht Belt hotels, pay off police officers, and then play those machines during vacations. “My father would say how they would show up on Friday nights and expect the hotel owners to make them a Shabbos meal -- on the house, of course!”

Pollack teaches in U-M's Helen Zell Writers Program and is the author of nine other fiction books, including Breaking and Entering, which tells the story of a Christian/Jewish couple that moves from California to small-town Michigan and focuses on the “red state/blue state” divide that is so prevalent in our country. The book was released before the 2016 election.

“Not many people were talking about [the divide] back then,” she says. “Then after the 2016 election people seemed to wonder where all of the division came from.”

But Pollack saw that division when she moved to Michigan in 1994, just before the Oklahoma City bombing. It struck her that how “in one state, in one town, you had people who were so different … with such radically different belief systems but we sort of still get along. But it’s not new, we are not newly divided … it just has been brought out into the open.”

Pollack is currently working on a new novel that is set in Ann Arbor, about a woman who runs an institute at the university. The professor studies the future and the possibility that advances in medicine and technology may allow humans to live significantly longer lives -- maybe even forever.

Until that book comes out, readers can enjoy Dirty Jokes, which Pollack describes as a “feminist-comic-murder mystery.”

Maybe you’ll even pick up a new dirty joke or two.