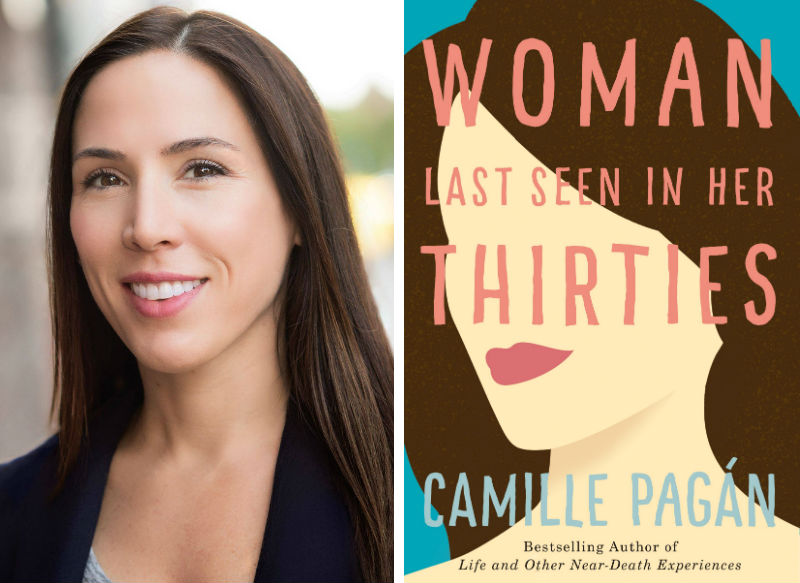 Ann Arbor-based novelist Camille Pagán (Forever Is the Worst Long Time, Life and Other Near Death Experiences) was in the midst of writing a book that wasn’t going anywhere when she had an unnerving grocery-store experience.

“This guy, a college kid ... bumped into me and didn’t even look at me or say anything,” said Pagán, who also noted that on other occasions while out shopping, she’d observed “when a cashier would talk to and make conversation with a middle-aged man but then not talk to the middle-aged woman who was next in line. This seemed to me to really be saying something about our society and how we view and treat women as they age.”

Indeed, Pagán’s grandmother “once made the observation that it was better to be an old woman than a middle-aged woman,” said Pagán. “She said, ‘When you’re an old woman, people open doors for you, they offer you a seat, they talk to you.’ ... And I was on the cusp of middle age, so I already knew what things looked like from that perspective.”

These incidents planted the seed for Pagán’s newest novel, Woman Last Seen in Her Thirties, which tells the story of Maggie, an anxious, 53-year-old empty nester in Chicago who’s blindsided when her husband, Adam, suddenly announces he’s in love with a 30-year-old and wants out of the marriage. When Maggie decides to still take the trip to Rome the couple had been planning for their upcoming anniversary, she meets a new friend -- a female painter named Jean who's heading to Italy for a six-month-long fellowship -- who offers Maggie the chance to have a change of scenery by house-sitting her place in Ann Arbor.

Maggie accepts and slowly begins to build a new life for herself in Treetown, finding friends, volunteer work she believes in, and a potential new love. But when Adam has a serious health scare, Maggie and Adam must determine what they owe each other, and what future they want for themselves.

“They say that you write about what you’re afraid of, and for a long time, I wasn’t sure I believed that, but now I see that pattern in my work pretty clearly,” said Pagán. “I consider myself to be in a pretty solid marriage. ... But I’m also in that phase of life when you see [the dissolution of marriages] happening all around you. I have girlfriends who tell me they’re getting divorced because they’re not in love anymore, or they’re both just not happy. It happens all the time.”

One of the things Maggie does while shakily forging a new path for herself involves shutting down her daily wine habit. In fact, after a hazy night in Rome, she decides to stop drinking altogether.

“I think that choosing not to drink is a sustained effort, if only because alcohol is everywhere, and people are constantly asking why you’re not drinking,” said Pagán, who’s also spent many years working as a health reporter. “This occurred to me after I wrote a feature for Real Simple called ‘Rethinking Drinking,’ about why alcohol is such a big part of modern women’s lives, and how opting not to drink can feel like a big deal. ... I’ve never heard from more readers than I did for that article. It struck a nerve, and I thought it would be interesting to make it part of Maggie’s story. For her, alcohol is a bad habit ... and letting go of that habit is one more way that Maggie takes back control of her life.”

A word often applied to Pagán’s fiction is “breezy,” and the author confesses that “it took me writing four books to realize that there’s value to that,” said Pagán. “There’s something about a page-turner that’s really satisfying.”

But Woman Last Seen happened during a tough time in Pagán’s life: As she started working on it, she knew she’d soon be losing her beloved grandmother, who’d played no small role in raising her.

Pagán’s personal grief inevitably bled into this story of a woman grieving her marriage. “That feeling of loss was definitely with me as I was writing,” said Pagán. “I had a hard time feeling warmly toward this book. I’ve only ever missed one deadline, and it happened while I was editing this book. I just had no perspective on whether it was working, or if it was the worst thing I’ve ever written.”

After the book was released on Feb. 27, though, Pagán began to hear from readers who confirmed the former.

“I heard from one reader who said, ‘This is exactly what my divorce felt like,’ and then I heard from a 74-year-old woman who’s husband had passed away, and she said the story captured how it felt to suddenly live through your life alone,” said Pagán. “Just to hear something like that -- that someone was moved by my work -- made everything worth it.”