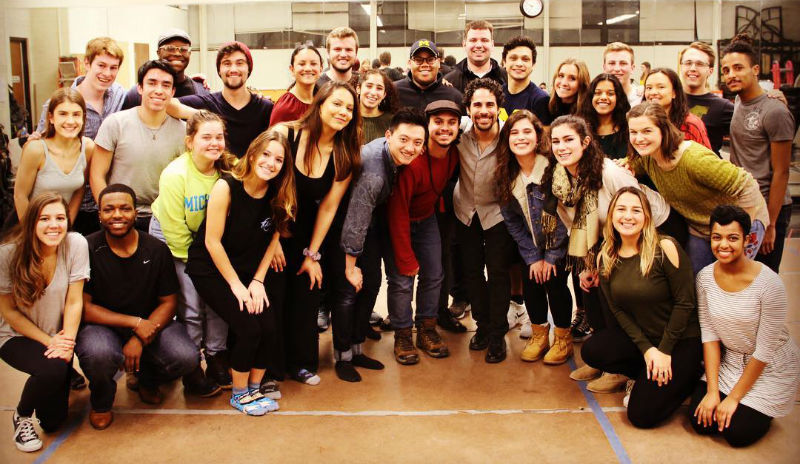 The cast of In the Heights was joined by Tony Award-winning orchestrator and music director Alex Lacamoire for a workshop and master class.

That’s the main question that threads throughout Lin-Manuel Miranda’s semi-autobiographical musical In the Heights, a story about the neighborhood Washington Heights and all of the people who live there. Miranda is best known for creating Hamilton a few years back, but he first rocketed to Broadway fame as the writer and lead actor in In the Heights.

“It’s unbelievable how he was able to encapsulate this whole community into music,” said Bruna D'Avila recently, the director of an entirely student-produced and acted University of Michigan Musket production of the show that runs March 16-18.

D’Avila, a junior at the University of Michigan studying theater performance, explained that this show feels more personal for her than most since she recently moved to America from Brazil. “I think In the Heights is the first musical that represents Latinos the way we really are. Because all we see in this show are hardworking people. Yearning for an education, yearning for a better life, yearning for a better job. And we don’t see that very often, not only in theater but in the movies.”

Along with feeling like it’s a very personal story for her, D’Avila also feels a strong sense of responsibility to the material as well. “I have to realize that this audience, maybe they don’t know a lot of my culture,” said D’Avila. “And this is really presenting and welcoming them into my culture, and into this community. And I just really want to make sure that I’m doing it right.”

Given that this production of In the Heights features a cast of nearly 25 students and large production team as well, this is a highly ambitious project for D’Avila and for Musket. “The biggest challenge is, as much as it’s an incredible show, it’s also a humongous show. It’s big.” D’Avila, who tends to speak fast and think faster, pauses for a moment as the weight of that sinks in. “Everything is a production. There’s a lot of choreography, there’s a lot of dance numbers, there’s a lot of songs, the set is huge. So you know it’s a big show for Musket. And we really want to do it right.”

For D’Avila, what was most important in succeeding in pulling this off was casting the show in a way that she could feel proud of. When I asked her about what she was looking for when casting the piece, she was emphatic. “Number one was diversity. So important. I want to see the most diverse stage that the University of Michigan has ever seen.” Acting alongside the students majoring in theater, In the Heights will display the abilities of students who are performing in their first show ever.

“The show is about Latinos -- so, yes, a lot of our cast, most of our cast is Latino. But I think the story of Washington Heights is such a universal story as well. Most of the people in the US have an immigrant story. The Irish, the Germans, the Chinese -- everyone immigrated to the U.S. for the better life. I wanted everyone on that stage to feel like they had the possibility to tell that story, even though it’s mostly focused on one culture.”

The University of Michigan Musket's production of "In the Heights" runs March 16-18 at the Power Center, 121 Fletcher St, Ann Arbor. Visit ummusket.org for tickets, show times, and more information.