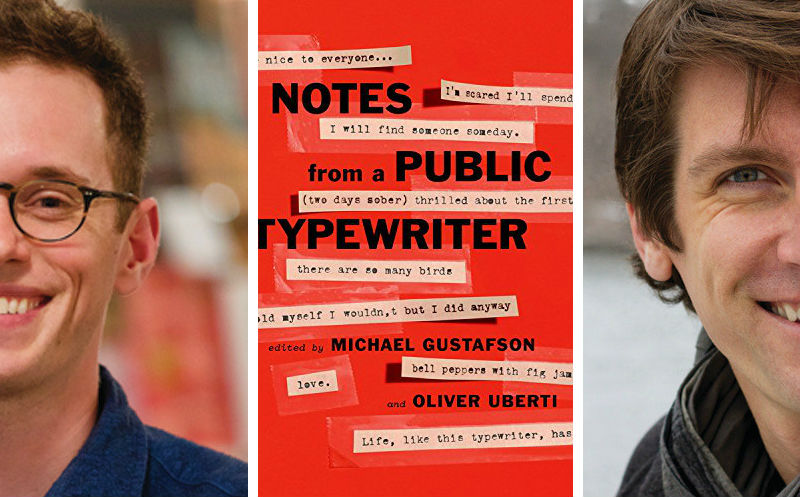 Literati's Michael Gustafson teamed with designer Oliver Uberti for a book capturing dreams and desires left on the bookstore's typewriter.

When Michael Gustafson, co-owner of Literati Bookstore with his wife, Hilary, put a typewriter out for public use in the basement of the store, he wasn’t sure what would come of it.

"There was no concrete plan,” he says. “It was more of an experiment.”

Literati’s logo features a typewriter based on a Smith Corona that Gustafson inherited from his grandfather, and he decided it would be fun to give customers the chance to use a typewriter when they visited the store.

He had no idea it would be as popular as it is.

“After reading notes of love and loss and everything in-between, I couldn’t throw those notes away,” says Gustafson. “I began taping my favorite notes on the wall behind the typewriter and saving the rest -- not for a book, but for saving’s sake.”

He felt that they were like souvenirs or other items of importance. It was actually Literati customers who first started to ask if the notes could be turned into a book. Gustafson said that he was at first “reluctant,” unsure of how a book of notes would come together. It was designer Oliver Uberti who showed him what a book of typewriter notes might look like; from there, Notes From a Public Typewriter was born. The book is out now and Gustafson and Uberti will hold a special release party event at Literati on Friday, March 30 at 7 pm.

The book is a slim, stylish volume with an eye-popping red cover. Notes from the typewriter are divided into short chapters, each based on a similar theme. Interspersed with the notes are photos of the bookstore, some taken by customers and depicting their experience there, others taken by Gustafson, Hilary, or other staff. Reading it is an intimate experience, putting one into the shoes of the thousands who have crossed the checkered tiles of Literati’s foyer.

The notes left on the typewriter encompass a wide range of emotions. Gustafson says that their subjects depend a lot on the time of year or the day of the week. “If it’s a Saturday night, the notes trend towards loneliness,” he says. “If it’s near Valentine’s Day, love. If it’s around the time of The Game, there are quite a lot of ‘Go Bucks!’ messages trolling our typewriter.”

He says that choosing which messages would be published in the book was a “wonderful and rewarding experience.” He and Uberti gathered together the hundreds of notes Gustafson had saved over the years and created a spreadsheet of their favorites. “To make the initial cut, a note had to jolt one of us,” Gustafson says. “We were looking for authenticity and honesty.” The two then arranged the notes by category and found that they began to create their own story arcs and play off of each other.

Gustafson says Notes is “our ode to independent bookstores and the written word and this community of book lovers.” Anonymity is so often lost these days because everything that we do has our name attached to it in some way. He hopes that by reading truly anonymous notes, “people just remember how much fun language is and are inspired by the power of words.” And of course, he hopes that the book will encourage people to visit their own local indie bookstore.

So, does Gustafson have a favorite note among all the thousands he has read over the years? He does, he says: “'When we were younger, we would color our skies purple, our trees blue, and it always looked perfect to us.’ There’s so much in this one sentence -- longing, fondness, sadness -- that I want to know more, and yet that not-knowing is what makes the note complete.”

"Notes From a Public Typewriter," from Grand Central Publishing, is available now. Literati will host a special event with the authors at 7 pm on Friday, March 30 at the bookstore, 124. E. Washington St., Ann Arbor.