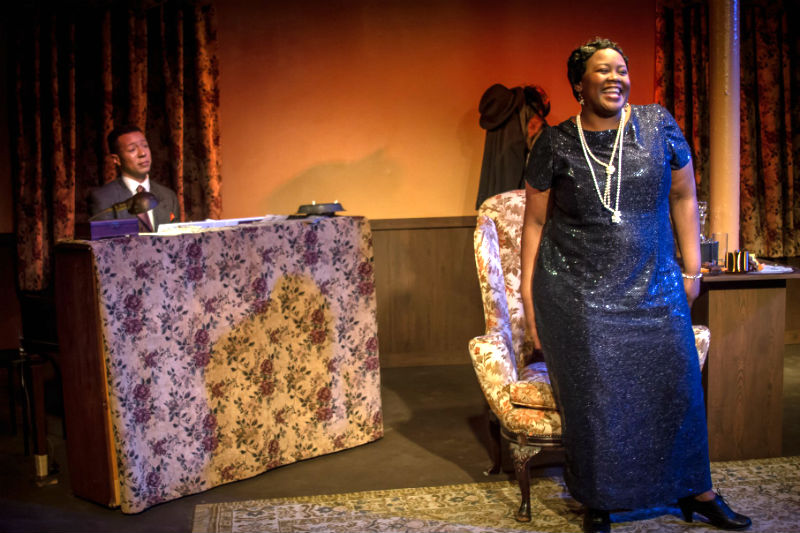 When Bessie Smith sang those opening lines of "St. Louis Blues" the world took notice. Here was a voice to be reckoned with -- deep, resonant, and profoundly emotional.

Smith proclaimed herself "The Empress of the Blues" as a taunt to Ma Rainey’s "Queen of the Blues" title. No one would ever dispute Smith’s right to the crown. But popular music’s first great diva lived out those blues in a life that was both a celebration of free living and a reckless disregard for the dangers of that freedom.

The Devil’s Music: The Life and Blues of Bessie Smith is part cabaret show of Smith’s music and the alternately comic, melancholy, angry, and defiant story of Smith’s life from a shack in Tennessee to become one of the first major recording stars of the 1920s, as told by the irrepressible Smith herself.

In the Theatre Nova production of The Devil’s Music, K Edmonds doesn’t impersonate Bessie Smith, she becomes the great singer. She swaggers, she growls, she coos. She is a force of nature, haunted by premonitions of death, defiant in the face of racism, a brutal marriage, and a bisexual orientation that put her at odds with the times.

The play by Angelo Parra tells Smith’s story in a series of reveries between performances of her songs, which echo the events of her life. Parra’s portrayal of Smith is sympathetic and even laudatory of her courage in living her own life, but it is also honest is presenting the darker side of living that free life.

As good as the narrative is, the music takes front and center. Those songs range from haunted narratives of careless love to joyous celebrations of love renewed. They are funny, naughty, sad, and angry and they were an introduction to a different kind of music to both black and white audiences. It was personal, rough, and emotionally deep.

The songs, "St. Louis Blues," "I Ain’t Got Nobody," "Tain't Nobody's Biz-ness If I Do," "Nobody Knows You When You’re Down and Out," and others still resonate with their blunt honesty and their rhythmic drive.

As Smith says, she became a star who sang with the best musicians of her time, including Louis Armstrong, Benny Goodman, and Lionel Hampton. She played with big bands, combos, and with just a piano accompaniment.

This one-act play opens with a dandy named Pickle, high-styling into a small room with an upright piano and an easy chair. He tells the audience that he has just been to the funeral of his friend Bessie Smith and marvels at the fact that 7,000 mourners turned out for a black woman raised in poverty. The end came early for Smith in an automobile accident in Mississippi. Pickle then begins a narrative of Smith’s life that is overtaken by the memory of Bessie herself talking and singing.

Director Lynch Travis makes fine use of the small, intimate Theatre Nova space by having Edmonds dance, swagger, and sashay across the tiny “house-party” space, drawing the audience toward her and into her story. The music isn’t random and Travis makes the connections clear as Smith unreels her story under the influence of an ever-handy glass of alcohol, usually gin, but white lightnin’ if she can get it. Yet Edmonds is never a stage drunk, as she and Travis do not let Smith become a caricature.

Brian E. Buckner does double duty as music director and as Pickle, the warm, sympathetic, and yet centered piano player. Buckner brings an uptown gait, an expressively mobile face, and a killer smile to the role of Pickle. Equally important, he knows when to rein it in and respond seriously to Smith’s troubled story.

As cabaret show, alone, The Devil’s Music is worth seeing. The two performers are in happy sync, the songs are great, the risque dances and banter are funny, and the house party feel of the setting is perfect. But the added poignancy of Smith’s story gives the songs a deeper meaning.

Edmonds gives especially emotional performances of "Nobody Knows You When You’re Down and Out" and "Tain’t Nobody’s Biz-ness If I Do." These two songs define the legendary Bessie Smith, a proud and defiant woman who did things her way and yet also a vulnerable soul and felt the pain of often tragic personal life.