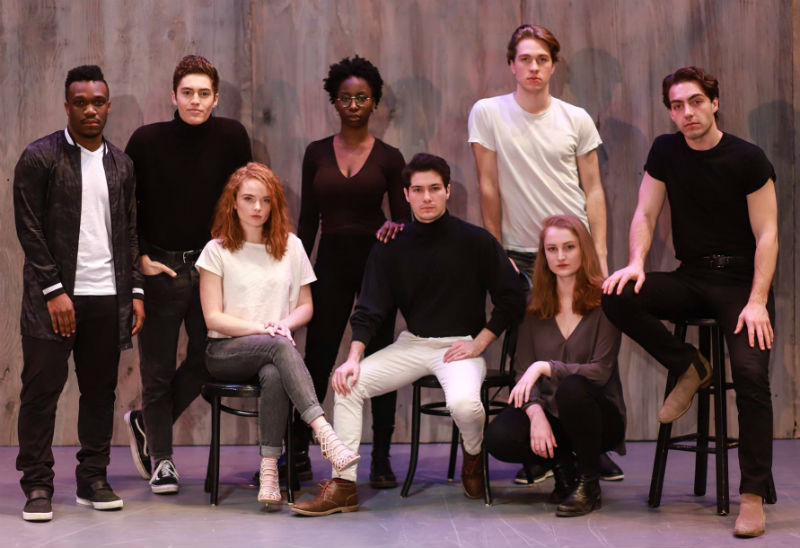 The cast of U-M's production of Angels in America, Part 1. Photo by Kyle Prue.

It’s amazing how, when a brilliant script is masterfully executed, three and a half hours can seem to pass in the blink of an eye.

Yet that’s the experience you’ll have if you’re lucky enough to catch the University of Michigan Department of Theatre and Drama production of Tony Kushner’s Angels in America, Part 1: Millennium Approaches -- which is so terrific that it’ll remind you all over again why the play has earned its status as a timeless masterpiece.

For the first chapter of this two-part, epic, Pulitzer Prize-winning play premiered back in 1991 at San Francisco’s Eureka Theatre and told an era-defining story set in New York City in the mid-1980s – the height of the AIDS epidemic. We’re introduced to three sets of characters whose lives intersect: Second Circuit Court word processor Louis (Jesse Aaronson) and his boyfriend Prior Walter (Jeffrey James Fox), whose health is rapidly worsening; a judge’s chief clerk, and a transplanted-from-Utah Mormon, Joe Pitt (Peter Donahue), and his hallucinating, Valium-popping wife, Harper (Savanna Crosby); and powerful right-wing lawyer/macher Roy Cohn (Sam Dubin), who pushes Joe to accept a position in the Justice Department in Washington so as to have a sympathetic ally in high places.

Joe’s and Louis’ paths initially cross at work, in a public bathroom, as Louis is crying over his struggle to stay with Prior as AIDS ravages his body. In that moment, Louis voices his assumption regarding Joe’s homosexuality -- which Joe denies, citing his marriage as proof, but he’s visibly rattled by the observation. Harper, meanwhile, spends her days alone in the couple’s apartment, obsessing over the Earth’s deteriorating ozone layer, dreaming of traveling to Antarctica, and struggling to figure out why her husband goes on so many long walks and shows no sexual interest in her. Cohn is enraged by charges of ethical misconduct, as well as his own AIDS diagnosis. And Prior, finally, finds himself in and out of the hospital, facing his illness and his mortality alone.

As Prior, Fox is the emotional fulcrum of Angels, and boy, does he deliver the goods -- to such a degree that when Prior matter-of-factly disrobes for a nurse, so she can note any new lesions, the inherent vulnerability of this brief moment of stage nudity almost feels redundant. For we’ve already seen Fox’s Prior writhing in fear and pain, screaming “Where’s my boyfriend?” while knowing full well that Louis won’t come.

The surrogate recipient of Prior’s grief is his compassionate, loyal, and sassy friend Belize, played with fantastic flair by Elyakeem Avraham (who also makes one of my all-time favorite stage entrances, on roller shoes, as Harper’s imaginary travel agent Mr. Lies). Crosby’s Harper, meanwhile, is unhinged and profoundly lost in her apartment, let alone in New York City, but she’s also grounded by an earnest wish to want what convention dictates as “normal.” Donahue’s Joe Pitt suffers a similar anxiety, and in terms of character work, Donahue has one of the largest mountains to climb, since Joe’s a man who’s in hiding from himself, let alone everyone else. (Donahue’s/Joe’s moments of truth, with Harper and with Louis, ring true and will quietly break your heart.) Aaronson impressively strikes the right balance as Louis, never making him a villain, but never completely letting him off the hook, either; and Dubin, as Roy Cohn, is a perfectly-rendered, blustering, larger-than-life force of nature, intriguingly enhanced by the fact that Dubin’s physical stature is smaller than many of those confronting him on the Arthur Miller Theatre’s stage.

But director Daniel Cantor’s production of Angels at U-M sets itself apart not only by way of powerful performances but also by its impactful atmospheric touches. For instance, Cantor launches the show with the entire cast laid out in a single row onstage, calling to mind recent protest “die-ins,” both on U-M’s campus and elsewhere. Colin Fulton’s projection design, meanwhile, featuring artwork by David Wojnarowicz and Paul Klee, is loud, frenetic, beautiful, and unignorable, like the personal challenges faced by Kushner’s characters. And finally, drummer Nicole Patrick provides jazz-infused connective tissue between scenes -- which feels so perfect as a means of underscoring the jagged, textured world of Angels that you end up wondering how it hasn’t found its way into every production.

Lighting designer Christopher M. SImko illuminates Angels with an eye toward not only guiding our eyes but also underscoring each scene’s textured emotional tone, while Henry Reynolds’ outstanding sound design makes the play’s hallucinatory and supernatural elements more impactful. Hair and makeup designer Brittany Crinson skillfully manages to make a couple of normally robust 20-year-olds look as though they’re sprouting large lesions and assuming the pallor of grave illness. Set designer Vincent Mountain (and Cantor) adheres to Kushner’s instructions about using spare sets, with no blackouts, so that cast members often remain on stage, and take part in the quick scene changes. And Christianne Myers’ costumes manage to be crisply professional in regard to the 1980s New York legal set; wittily fanciful, pertaining to the show’s imaginary characters (and those who take vacations via their imaginations); and seasonal, since the story unfolds as winter approaches (it even snows on stage at one point) and characters are often bundled in stylish sweaters and scarves and coats.

By way of a coda, I’ll close by confessing that I was not in the best frame of mind when I arrived at the Walgreen Drama Center on Angels’ opening night. My spouse suddenly had a professional emergency to tend to out-of-state, leaving me scrambling to find a sitter for the kids and get to Ann Arbor.

But then, Cantor’s Angels worked its magic on me -- and it is magic. Not just because of the unique way Cantor (and one member of his knockout cast) presents the piece’s iconic final supernatural moment, but because everyone involved in this production has lovingly mined the complexities and humor and heartbreak of each individual scene, stitching them together in a way that leaves you yearning to spend far more time with these troubled, strange-but-familiar souls.

That’s something that can’t often be said for shows with a nearly four-hour run-time. But U-M’s Angels is just that good.