Theater for the People: U-M's "Me and My Girl" is a rollicking populist musical comedy 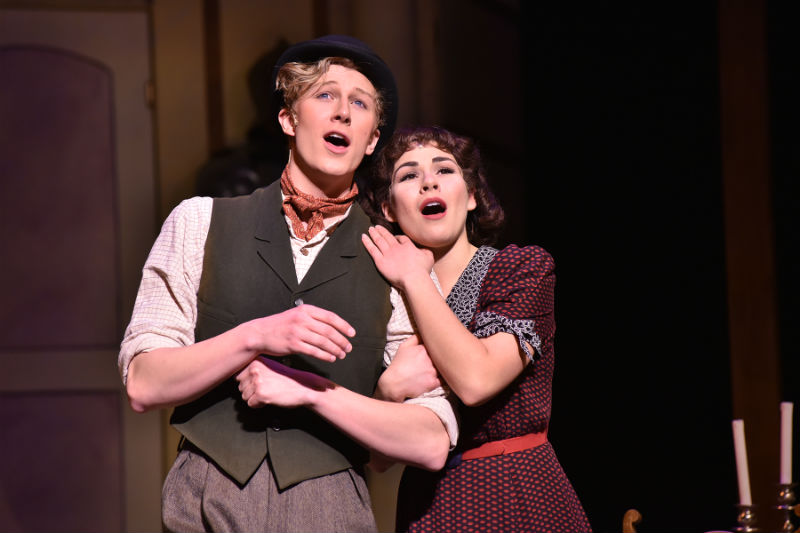 Elliott Styles as Bill Snibson and Sophie Madorsky as Sally in the U-M Department of Musical Theatre’s production of Me and My Girl playing at the Power Center April 12-15. Photo by Peter Smith Photography.

It feels a bit like director/choreographer Linda Goodrich, a professor in U-M’s musical theater department, has long had a date with destiny regarding the 1937 British musical Me and My Girl.

For although the show had long been one of Britain’s biggest home-grown stage musical hits, it didn’t make its Broadway debut until 1986 -- the same year Goodrich moved to New York.

“I remember seeing it on a marquee, but I never did see it,” said Goodrich. “In fact, I’d never seen it on stage before we started rehearsals. I’d always been familiar with the music and been curious about the show, but it just never crossed my path again.”

For the 1986 Broadway production, Stephen Fry (with contributions by director Mike Ockrent) revised Douglas Furber’s and L. Arthur Rose’s original book for the show and added composer Noel Gay’s song “Leaning on a Lamppost” to the catchy score.

The show tells the story of an aristocratic family seeking a legitimate male heir to become the next Earl of Hareford. The search unearths a Hareford man’s secret, brief past marriage to a Cockney girl, which yielded a son named Bill Snibson. To claim his inheritance, though, Bill must satisfy the executors by adopting aristocratic speech and manners -- and possibly leave behind his beloved Cockney girlfriend Sally.

“It was first done in London in 1937, mid-war, and the theater was bombed out,” said Goodrich. “But Winston Churchill was committed to keeping theater alive -- especially a happy, frolicking production like this. He thought keeping it open was good for the spirits of the people.”

The escapism offered up by the show in its original historical moment feels just as inviting now.

“This is a heavy time for our country, and it’s just been so great to go in and be in a happy show,” said Goodrich. “We’ve all really needed it. ... And this was not a show the students were delighted about doing when we announced it. But since we started working on it, the students have been saying things like, ‘Oh, my gosh! This is so funny!’ So it’s been fun to watch them discover it.”

Several of the show’s funniest moments stem from physical comedy -- which was one of its appeals when Goodrich’s colleague, Professor Mark Madama, suggested Me and My Girl for the students.

“We hadn’t done a tap show in a while, and that was a big reason we chose it,” said Goodrich. “Plus, there are lots of parts. It’s really difficult to find a show with an equal number of parts for men and women. ... The '30s were the era for singing and dancing choruses, so it offers a great opportunity for strong ensemble work. ... When our students go to New York, they’re asked to do everything -- from Golden Age musicals to rock shows that are more contemporary. So we try to introduce them to as many show styles as possible.”

Me and My Girl was originally conceived as a vehicle for its star, Lupino Lane, who’d previously played Bill Snibson in a play about horse racing called Twenty to One. Though Me and My Girl opened without much fanfare, the BBC decided to broadcast a matinee performance on the radio when a sporting event was canceled and the show quickly became a huge hit.

“The songs became standards in that time,” said Goodrich. “The show really grew out of the music hall. ... There’s the physical comedy, and it breaks the fourth wall quite a bit. ... Characters often step out of the show, and members of the cast go into the audience a few times. It’s really in the British tradition of ‘theater for the people.’ Just that ideology makes it feel a little different. It’s not about the performers being above the audience. We’re together making the show happen. There’s a real sense of us reaching across the footlights.”

U-M’s musical theater department production of “Me and My Girl” plays April 12-15 at the Power Center. For details and ticket information, visit tickets.smtd.umich.edu.