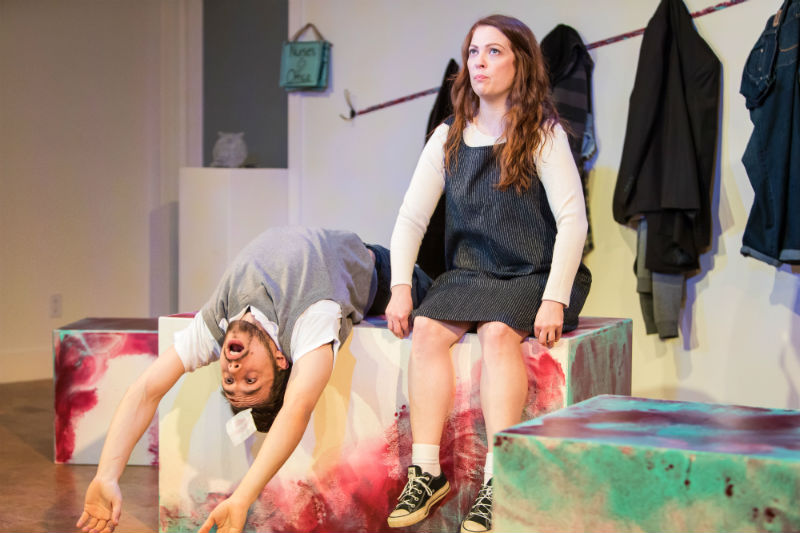 Fittingly, Rajiv Joseph’s Gruesome Playground Injuries, now being staged by Kickshaw Theatre at Ann Arbor’s trustArt Studios, starts in a parochial school’s infirmary, where a deep, lasting friendship takes root between a girl and a boy who recognize in each other a common compulsion toward self-destruction.

The boy, Doug (Michael Lopetrone), is a reckless, thrill-seeking daredevil, while the girl, Kayleen (Dani Cochrane), suffers from stomach problems and later develops a serious cutting habit. The 80-minute play shows glimpses of these two characters at several different ages, between 8 and 38, but it jumps around in time, inviting us to piece together the puzzle of Doug and Kayleen’s intense connection by shifting from childhood to adulthood and back again.

Indeed, Lynn Lammers’ scenic and props design, Shelby Newport’s costume design, Rita Girardi’s lighting design, and Lammers’ and Aral Gribble’s sound design all work together to execute the play’s structure, with a rising line drawn on the back wall, and coat hooks (marked with different ages) holding different costumes for each scene. In addition, Lammers -- also the production’s director -- provides a bit of choreography as connecting tissue, with music and coolly colored, dim lighting, so that the costume change transitions have an emotional component as well.

Despite Doug and Kayleen’s soulmate-like affinity, they only flirt with romance, despite their obvious, years-long love for, and attraction to, each other. Perhaps on some level they realize -- while visiting each other in the hospital, at a recovery center, at a funeral -- that their self-sabotage makes each of them both a ticking time bomb and a walking heartache. Even so, Doug firmly believes Kayleen has the power to heal him with her touch; and while Kayleen remains skeptical, over the years, she comes to think it might be true.

It’s a great credit to Lopetrone and Cochrane that their performances manage to give a thin script more depth. For although we literally watch Lopetrone put a patch that looks like an empty socket onto his eye, to make it appear that Doug’s blown it out with a firecracker (theatergoers should take the word “gruesome” at face value), you’ll still find yourself squirming as he begs Kayleen to touch the socket -- and recoiling when Doug asks Kayleen to cut his skin like she cuts herself; and feeling queasy when Doug makes himself vomit as an act of solidarity; and grieving when Doug adamantly refuses Kayleen’s possibly-healing-hands.

The on-stage chemistry between the actors is edgy and profound, as it must be for the play to work; but in the end, these are characters in extremis, and we never quite get enough information to fill in the broad gaps that would make them feel more real.

Yes, we hear a line or two about Kayleen’s absent mother and jerk of a father late in the play, but it’s done in broad, generalized strokes, providing us with little insight; and we hear nothing of Doug’s home life, making the scenes between these two damaged characters feel like they’re occurring in a vacuum instead of our complicated, beautiful/awful world.

But I continue to appreciate Kickshaw’s commitment to producing relatively new, little-known plays that challenge audiences. Joseph’s Gruesome Playground Injuries script may have left me feeling unsatisfied in some ways, but thanks to Kickshaw’s production team, there are several moments that will nonetheless stick with me for weeks to come.