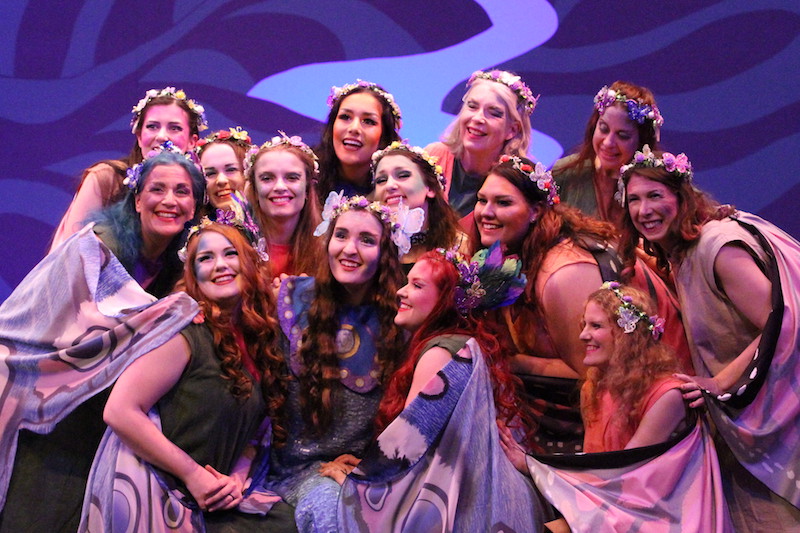 The Fairy Chorus of Iolanthe at the Mendelssohn Theater.

This weekend, the University of Michigan Gilbert and Sullivan Society (UMGASS) stages Iolanthe, bringing Thirsty Fairies, Peer Pressure, and one long strange trip of a dream sequence to the Mendelssohn Theater. Iolanthe is the seventh of Gilbert & Sullivan's 14 comic operettas, steeped in the class divisions and political satire of the day, with a hearty dollop of supernatural weirdness.

Directed by Greg Hassold and featuring an extremely solid pit orchestra led by Thomas Burton, this wonderfully busy production has a lot going on in every scene and is just dripping with the talent of fresh-faced leads, seasoned supporting characters, and a chorus that is plainly having a wonderful time.

U-M freshmen Megan Maloney and John Fioravanti as romantic leads Phyllis and Strephon deliver outstanding vocal and physical performances. Maloney's performance is a particularly impressive debut, from lovestruck mooning over Strephon to the thinly veiled disgust at her suitors, appropriate for her predicament as a ward of the court. Her range is on particular display during a mournful wail that is delivered to great comedic effect. Gilbert and Sullivan's plays are at their best when the actors are crying on stage and you're laughing in the house.

UMGASS regulars Lee Vahlsing as Lord Montararat and David Andrews as the Lord Chancellor are delightful as ever; the nightmare sequence in the second act not only shows off Andrews' formidable patter chops but is ambitiously staged and wonderfully preposterous. Alexandra Kzeski, who played Princess Ida last term, shines as supporting character Celia, leading the chorus in mugging her way through some very clever choreographic bits. I also couldn't miss Patrick Takata, who stole the show as Florian last term, and continues to deliver quality ham even from the Chorus.

A particular standout is bass Ben Powell as Private Willis, an odd G&S character who isn't introduced at all until the second act. It's a very funny role, exceptionally well delivered with the appropriate mix of smirk and deadpan. I hope to see Powell, another freshman, in some of the other great basses of Savoydom in future productions. UMGASS staple Lori Gould also has a knowing, exasperated presence as the Fairy Queen, with a very impressive costume and milkweed staff.

All the big numbers are just super-engaging, with many miniature storylines playing out across the stage, nobody taking it too seriously, and everyone hitting their marks. If there's a little fairy fan in your life, well, here's your chance to introduce them to the sartorial differences between the Whigs and the Tories, and laugh at jokes about what would eventually become the Deceased Wife's Sister's Marriage Act of 1907. Congrats to cast and crew for another delightful UMGASS production.

UMGASS presents Iolanthe continues April 13, 14, and 15 at the Lydia Mendelssohn Theater. Tickets are available at Brown Paper Tickets or at the door.