Still Lifes Are Anything but Still: Poet Diane Seuss at Literati 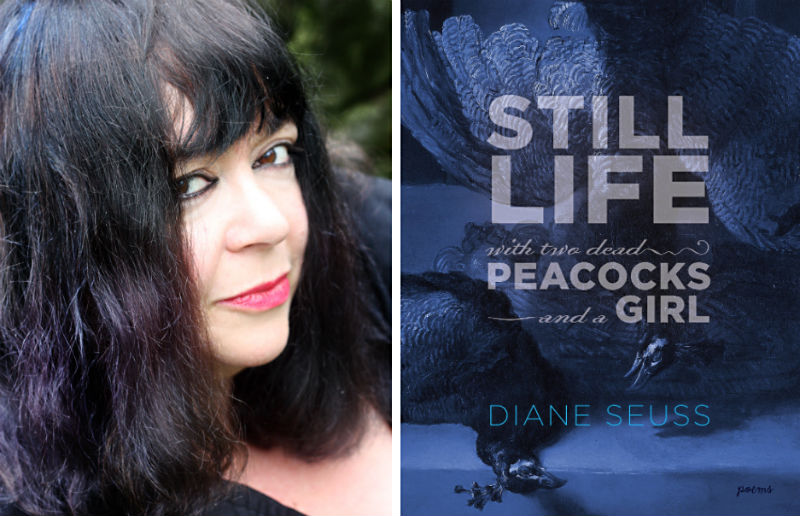 "Self Portrait with the Ashes of My Baby Blanket":

Ashes because she set fire to it in the burn barrel.
Leave her alone, with your newfangledness.
I was a clingy, fearful thumb-sucker, and she knew I needed reinventing.

She tore it away and I screamed and she burned it.
Begone, soft, pale yellow. She knew if I kept it I’d stumble over it
The rest of my life, how far I would travel without it,

And how many strange birds I would trap
in the story of its burning.

At a Literati reading this past Friday, poet and professor Laura Kasischke introduced Diane Seuss by reading one of her poems, “Self Portrait with the Ashes of my Baby Blanket.” The poem centers on Seuss’ mother, who is an important figure in her new book of poems, Still Life with Two Dead Peacocks and a Girl. The first and last poem, "I Have Lived My Whole Life in a Painting Called Paradise” and “I Climbed Out of the Painting Called Paradise,” introduce the reader to a heavenly, creative world that Seuss is able to inhabit but one that her mother, who is not a writer, cannot. Seuss “leaves” the painting to rejoin her family at the end of the book.

If you’ve read Diane Seuss before, you know that her poems are fire. They are evocative and real, and they’ve earned her many honors. Seuss’ second book, Wolf Lake, White Gown Blown Open, won the Juniper Prize for poetry and she received the Pushcart Prize in 2013. Currently, Seuss is the writer-in-residence at Kalamazoo College, where she has taught since 1988.

The Michigan landscape plays a large role in Still Life with Two Dead Peacocks and a Girl. Certain sections center on “the rural” and offer up the backdrop of a Walmart parking lot in Michigan as a setting. During the question and answer session, Seuss said she grew up in Niles, Michigan, right next to a graveyard in the country. She explained that whatever makes a poet, whatever raises a poet, gives a writer their aesthetic, and Seuss' aesthetic is heavily tied to the rural landscape in which she grew up.

But Seuss’ book is complex and layered; she also has sections that focus on still-life paintings by Rembrandt. Seuss explained that she became interested in still life painting because often these paintings centered around the domestic, and around women’s spaces. And really she said, still life paintings are anything but still. There are class struggles, hierarchies, shadows, and trauma hidden beneath the surface. Take the book's titular Rembrandt painting Still Life with Two Dead Peacocks and a Girl, which depicts a young girl who Seuss imagines leaves the comfort of her bed in the middle of the night to find something sweet to eat. The girl peers into a kitchen that has never been her own, and instead of finding a pie, she finds two dead peacocks that she steals away with into the night. She “suck[s] scorched tough dark meat off of hollow bones ... She’d hoped for pie. Meringue beaded gold. Art, useless as tits on a boar.”

Seuss also includes poems in the new book that are self-portraits. She includes self-portraits with Emily Dickenson, Sylvia Plath’s braid, and others like her legs and her baby blanket. Seuss said that she wrote those poems as a way to reclaim the gaze. Perhaps she also wrote the portraits to work through personal hardships. Seuss has been through grief and pain but she said that luckily, as an artist, pain becomes just another thing you can write about.

Laura Kasischke said in her introduction to the event that Diane Seuss’ first book, Four-Legged Girl, was so good that she did not think the poet could produce another book of the same caliber. But, Kasischke qualified, Seuss has written three books since then that have rocked the literary scene and blown open the world of poetry to a whole new group of readers. If you don’t already have a copy of Still Life with Two Dead Peacocks and a Girl, order one.