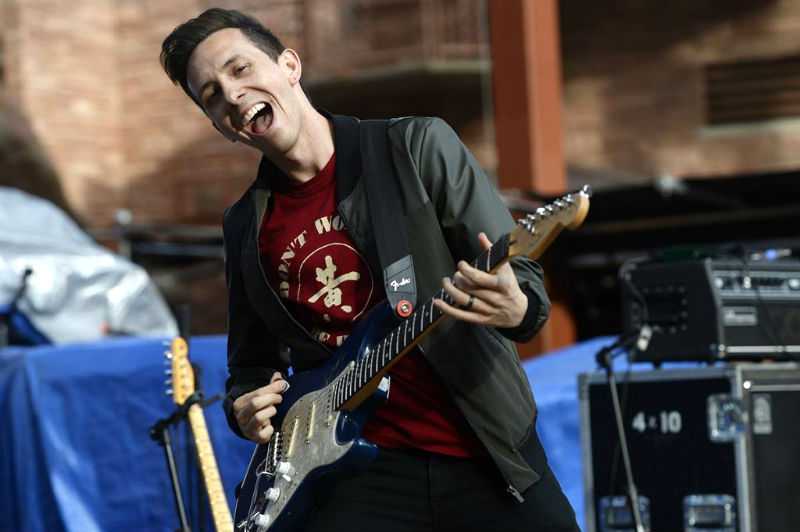 After seeing Theo Katzman at The Blind Pig a few weeks ago, I had been restlessly awaiting the concert there by a couple of his Vulfpeck bandmates, guitarist Cory Wong with vocalist Antwaun Stanley.

When I got to the gig there were around 40 people milling about, mostly men in their 20s and 30s. As the night went on, more people arrived and the room filled up until we all standing shoulder to shoulder.

Opener Jacob Sigman played a combination of pop and rock infused with soul. I can see why keyboardist-guitarist Sigman and his band would open for someone like Wong. Sigman’s rich, smooth voice reminded me of Joey Dosik's, yet another Vulfpeck member, hitting high notes with confidence. And not that he needed any assistance, but when Sigman asked the audience to help him sing a tune, the audience joined in readily.

I was impressed by some of the jazzy solos Sigman’s trumpet player played close to the end of the set. His guitarist also took a number of solos but they were harder edged and, at times, evoked classic rockers like The Rolling Stones. It seemed like a good number of the band's songs were about love, particularly unrequited love. Sigman and his band just came out with a new EP, Episode 1, and you can check out some of their work on Bandcamp, Spotify, and Facebook.

Keep an eye out for Sigman. He's from Ann Arbor and I wouldn’t be surprised if one day he headlines a sold-out Blind Pig like his pals in Vulfpek. You won’t want to miss it.

Cory Wong is a Minnesota native, but it’s easy to mistakenly think he's from Ann Arbor. Perhaps it’s because of his involvement in Vulfpeck, or maybe it’s Wong’s regular appearances in Ann Arbor, or perhaps it’s because he complains about the snowy spring weather as much as we do. Wong spent a few minutes at the beginning of his show to talk about the weather, Ann Arbor, and his goal of getting to play on a smooth jazz cruise ship.

Wong is a charismatic leader and the audience was pleased to hear him telling jokes on stage. He even put up a PowerPoint about cruise ships and played 32 bars of smooth jazz, which he hoped would qualify him to work on a cruise ship. He also taught the audience a little music theory and one his first songs was a battle between him and his drummer to see who could play the fastest. It was a great way to engage the audience and hype the crowd.

The audience went even crazier when Antwuan Stanley joined on vocals for Wong’s third song. It’s hard to explain the amount of energy and presence Stanley brings to the stage, and it seems like not one bad note can come out of his mouth. Members of Wong’s band regularly played solos, and Stanley was no expectation, using his voice to scat solos like the jazz greats. I liked seeing the back and forth between Stanley's voice and Wong’s guitar, singing to one another. It’s not until you hear people like Stanley that you realize how much rhythm and texture a voice can provide for a band. He gives the audience a clear picture of the importance of a good vocalist.

But with his voice-like guitar style, which can swing from shrieking to sad, the talented Wong can hold the crowd rapt with his wide-ranging instrumental music.