Out of the Ether: Nancy And Beth conjure musical beauty from the fifth dimension 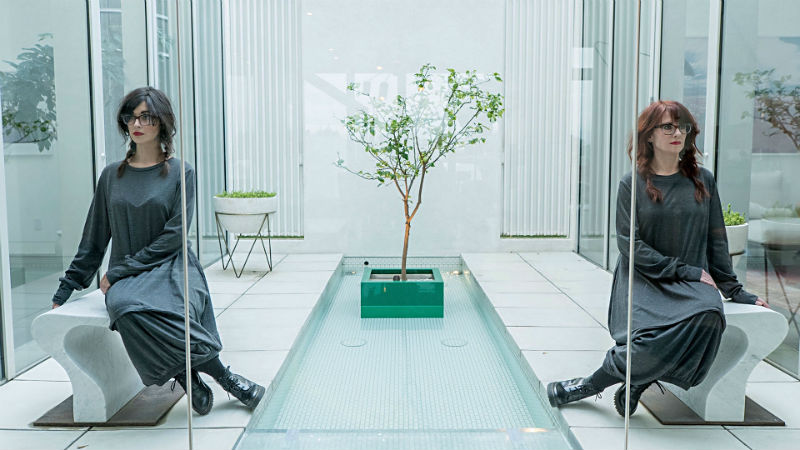 Most of us know Megan Mullally as boozy, unapologetically solipsistic Karen Walker on Will & Grace, and also perhaps as Parks & Recreation star Nick Offerman’s real-life partner, but not as a former dancer and Broadway performer.

This is likely why you’d be surprised to learn that Mullally, in recent years, has teamed up with another multi-talented artist, Stephanie Hunt (who played lesbian bass-player Devin on Friday Night Lights), to form a music duo called Nancy And Beth, which will perform at The Ark on Monday, April 23.

Where did the arbitrary names Nancy And Beth come from (complete with a capitalized And)? The answer will tell you a great deal about the two women’s soulmate-like friendship.

“We were in a restaurant in Austin with Nick one night, and we said, what should we call the band?” continued Mullally. “I wrote down in my phone all the names we picked. ... It was a long list. I couldn’t narrow it down, so I emailed it to Stephanie, but in the interim, I’d thought of the name Nancy And Beth. It just came to me in a vision. I could’ve just buried it in the middle of the list, but then she immediately emailed back Nancy And Beth. … It’s just one of those symbols of the thing that we both understand intrinsically about the band.”

Mullally creates choreography for almost every number in a Nancy And Beth show -- exceptions being quieter, more solemn numbers like Joni Mitchell’s “Blue” -- and the duo performs in matching outfits.

In addition, the two women also both have long, dark hair; wear big, dark-rimmed glasses; have similar builds (they decided to pose naked, front and back, for their self-titled album’s cover); tend to finish each other’s sentences; and have voices that sound so similar that it’s hard to tell them apart on the phone, yet magical to hear them sing in harmony.

And what kind of songs do they harmonize on? A broad range that may seem wildly eclectic on paper, yet comes together seamlessly via the Nancy and Beth “vaudeville punk” filter: classic R&B (“Mint Julep,” “Fine Brown Frame,” “Please Mr. Jailer”) and pop (“Everybody Loves a Lover”); country (“It’s All Your Fault,” “He Stopped Loving Her Today”); folk (Rufus Wainwright’s “Vibrate,” “Blue”); jazz and blues (“Don’t You Make Me High,” “You Let My Love Grow Cold,” “Walking Stick”); and gospel (“Waiting for My Child”).

“It’s very ephemeral,” Mullally said of the duo’s song selection. “It’s like we go into a fourth dimension when picking our songs. And when we’re arranging them with the band, it’s like we’re in some other dimension.”

“The fifth dimension,” Hunt piped in.

“If [our songs] have anything in common, it’s that there’s the sense, in a lot of them, of celebrating the underdog," Mullally said. "Which feels like something we’ve forgotten about in some way. We don’t tend to do hits -- not on purpose or anything. That just not what we’re drawn to.”

They often, however, include one rap song in their setlist: Gucci Mane’s staggeringly misogynist “I Don’t Love Her.”

“It’s so much fun because nobody sees it coming,” said Mullally.

“We set it up as this beautiful love song, and then, after it’s over, we usually say it was written by Gloria Steinem,” said Hunt.

Mullally and Hunt first met in Austin while they (and Offerman) were filming the indie movie Somebody Up There Likes Me (2012). Mullally, who grew up in Oklahoma City, was sitting in a rental car, preparing to drive to her hometown to see her mother, when Hunt climbed into the car, ukulele in-hand, and started singing a song she’d written, instructing Mullally on “her part.”

“We had hung out a bit before that,” said Hunt. “I’d been playing my ukulele everywhere. And nature kind of made it happen in the car. It was too hot to sit outside. We had to sit in the car.”

Both Hunt and Mullally were wowed by the way their voices blended. And shortly thereafter, when Offerman was looking for an opening act for a stand-up show, Mullally told him, “‘Have Stephanie open for you. She’s so weird!’ And he said, ‘You know what? That’s a great idea.’”

So Hunt got the gig, but she asked Mullally to join her on stage to perform the song they sang in the rental car. “That was the first time we sang together in public,” said Mullally. “And it wasn’t so much that there was this huge, standing ovation. It wasn’t a triumph or anything. But it just really felt right. And it was fun.”

That joy seems to be conveyed to curious crowds who come to check out Nancy and Beth while they’re on tour. (Plus, Offerman’s expected to tag along to Ann Arbor as a roadie!) For although music and dancing are important elements, the happy chemistry of Hunt and Mullally’s friendship seems to undergird the whole.

“We just have this weird affinity for each other,” said Mullally. “It’s fascinating for people to see us together because of our 30 year age difference. ... It’s like their brains want to put something else on it. But it’s actually something really comforting to see.”

Which is pretty much Nancy And Beth in a nutshell.

Blue is such a beautiful…

Blue is such a beautiful song
www.kingpinrollershutters.com