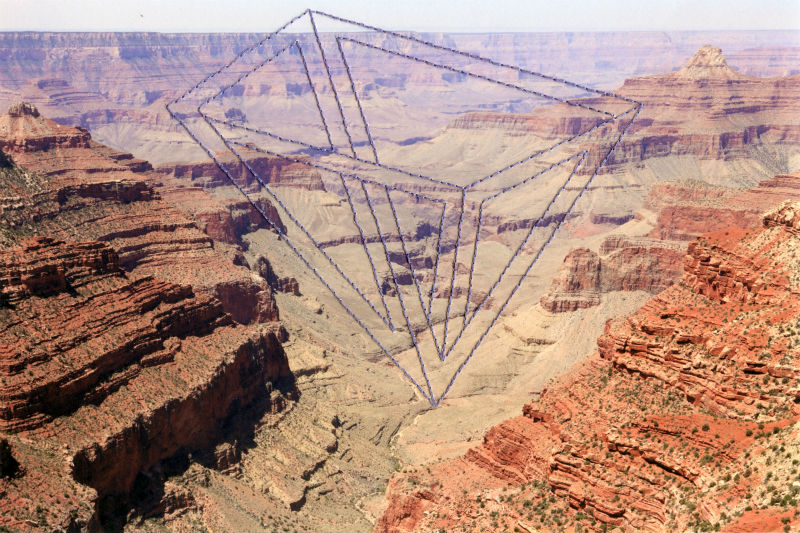 Ann Arbor Art Center’s current exhibition, Written Into Rock, explores imagery associated with the Earth, geology, and human impact on the environment. Curated by Gina Iacobelli, the exhibition features the works of seven artists dispersed throughout the gallery instead of placing works by each artist together.

The exhibition announcement states that the show “is an exploration of the ways in which humans have altered the natural landscape,” and was in part initially inspired by writings of Donna Haraway and Heather Davis, who explore ideas relating to the Anthropocene era, a “new geologic area defined by human’s mark on the geologic record.”

Written Into Rock explores concepts of “nature” and “culture,” and asks, what are the intersections between the two? This question is pertinent, particularly in this era ever-more defined by human intervention on the previously perceived “natural” landscape. The exhibition’s call to evaluate the nature/culture dichotomy has roots in long-established philosophical debates. Contemporarily, environmental issues are increasingly important and are frequently integrated into academia in disciplines such as the humanities, art, and science. Each of the seven artists’ works engages with the theme of the exhibition in a unique way.

Hannah Chalew, from New Orleans, creates large-scale works made from recycled paper and trash. She currently works from her studio on Broad St. in New Orleans. The two pieces included in the show at the Ann Arbor Art Center are biomorphic, extremely detailed, and caught my attention immediately. Root Shock is an amorphous drawing that's the color of recycled paper sprawled across the wall, somewhat ambiguously. Looking closely at the works, they contain an enormous amount of line-work, clearly referencing human impact on the landscape through imagery and media.

Michael Garguilo, an artist working in Royal Oak, Mich., explores geology through his large-scale semi-abstract paintings. Three works in the gallery are executed in acrylic, and one in oil. In his statement, Garguilo says, “Throughout history, humankind has buried the dead beneath mounds of earth.”

In this series, Garguilo considers “the weight of these collective contributions buried by modern man as they grow into new and mysterious forms and icons of modernity.” In the modern world, the mounds for the dead are not for our ancestors, but for our waste. What will we leave behind to tell of our culture? Garguilo thinks it might be, at least in part, refuse.

Phillip Hanson an artist currently working in Saginaw, Mich., explores themes of decay in his three mixed-media works that hang in the gallery. His piece Saffron Forge is painted on a wood panel that resembles a former cabinet door or picture frame, paint covering the entire surface. The scene resembles a landscape, with deep burgundy flocking (a type of fiber used in crafting) covering the left side of the panel and bright red paint layered beneath. Another work, Parietal Pariah, also done on panel, is covered in beeswax, designs etched on the surface.

Kristina Sheufelt is a resident of Detroit and graduate of the College for Creative Studies. Her work “is an exploration of the many intricate relationships between civilization and nature, and of the boundaries, real or perceived, that exist between them.” Sheufelt cites her rural Michigan childhood as an influence on her work, particularly in her combined imagery juxtaposing both man-made and natural materials. Her Untitled Nest Form represents a wasp nest, blown out of proportion, terrifying, mounted on a geometric, shiny metal mount. Many of her sculptural works are large-scale, contrasting to the scale the referent might be. But her Hollow Log, which consists of a found tree chunk that was filled with aluminum and allowed to dry, stands on a pedestal and lacks the imposing quality of Untitled Nest Form, illustrating the variety in her approach.

Brian Spolans is an artist based in Saline, Mich. Spolans has had his work exhibited in galleries across the country, in addition to working on co-curating exhibitions in the Ann Arbor area. In his statement, Spolans suggests that the objects he uses “hold metaphorical context,” leading to the end result of his imagery, “representational but symbolic, where the ‘thingness’ of the object is described, but not fully captured or realized.” He calls this a “space of Uncanny objects,” and “imitative incompleteness.” This endeavor is a commentary on the place that objects and images hold in our consumer culture, rendering them “heightened and isolated.” This is especially evident in his shelved pieces Rocky Isles and Wasteland, which feature cutouts layered in diorama-fashion on a shelf, the cartoon-like subjects interacting with anachronous surroundings.

Jessica Tenbusch studied metalsmithing at Eastern Michigan University. She currently lives and works in Ypsilanti. Her works are mixed-media installations, three of which she calls ARTIFACT/ECOFACT. The pieces are made of found objects (human-made materials), acrylic paint, and metals such as sterling silver and bronze. This interplay between the idea of the artifact as a human-made piece of historical interest is presented with the notion of an “ecofact,” which is a biologically occurring artifact, unaltered by humans. This raises the question: Is there anything unaltered by humans?

Millee Tibbs is an artist living and working in Detroit. Her work explores one of the central arguments surrounding photography as a tool of representation, slipping between an “index of reality” and “subjective construction of it,” as Tibbs states. Her recent work, shown in the gallery, explores her interest in the photograph as a three-dimensional object, the limitations of a photograph as an unmediated document of reality, and “photography’s role in the production of iconic imagery,” where Tibbs is “particularly interested in the space where the authentic meets the constructed.” Her work explicitly addresses these concerns through form, her use of sewing into the surface of the photograph. The intervention on the surface of the photograph immediately disrupts its credibility as an unaltered object, and at the same time asks how much intervention has the depicted landscape had?