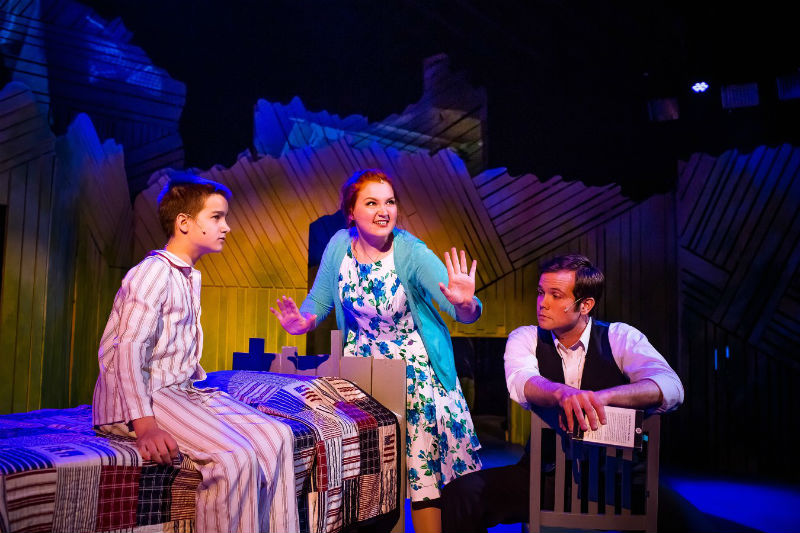 Perhaps because traditional, American modes of masculinity and emotional expression have stood at loggerheads for many generations, making father-child relationships highly complicated. Yet it’s precisely this dual struggle to connect that drives Big Fish, the novel-turned-movie-turned-stage-musical now playing at Dexter’s Encore Theatre.

The story begins when Will Bloom (Billy Eric Robinson) is about to be married to his journalism colleague Josephine (Kimberly Alley), and he asks his charismatic, tall-tale-telling father Edward Bloom (David Moan) to refrain from making a wedding toast, or sharing the baby news they’re not yet announcing. Edward, despite his promises, proceeds to do both, infuriating Will and putting his mother, Sandra (Emmi Bills), in the middle of yet another father-son squabble. But when Edward’s health takes a turn for the worse, Will grows desperate to know his father’s true history -- not the tales of mermaids, giants, and witches he’s been fed since childhood -- and this leads him down a path of discovery that Edward would rather leave blocked off.

Inspired by Daniel Wallace's 1998 novel and 2003's Tim Burton-directed film version (adapted by John August), Big Fish premiered on Broadway in 2013, with a book by August and music and lyrics by U-M grad Andrew Lippa. This original stage production aimed to bring Edward Bloom’s fantastical stories to life in true “theater spectacle” fashion; but despite its big budget and over-the-top approach, the show closed after a few short months.

Regional theaters could never revive that kind of lavish production, of course, so the Encore -- an intimate black-box space -- is instead presenting a scaled-down (though still three hours-long) “12 Chairs Version” of Big Fish, reshifting the show’s focus from fantasy to reality -- specifically, the relationships within the Bloom family. But are they, and Lippa’s score, compelling enough to carry the show?

Despite many strengths in the Encore’s production, the unfortunate answer is “no.” Yes, it’s impossible to compete with the film medium’s (and specifically Tim Burton’s) capacity for grand-scale, jaw-droppingly gorgeous imagery, so it simply makes sense to take a different storytelling approach on stage; but when the audience can’t key into that same wide-eyed sense of wonder that young Will did while listening to his father spin yarns, and the score merely fulfills its function without being particularly memorable or inspiring, even a “big fish” story can feel flat.

Nonetheless, Encore’s production (directed by Thalia Schramm) has moments when it positively hums with electricity, including Edward Bloom teaching a failed fisherman the Alabama Stomp (rousingly choreographed by Rachel Costantino); a sequence wherein Edward, as a teenager, meets a witch who tells him how he’ll die (Costantino’s choreography again plays a central role in the scene’s success, with Sharon Larkey Urick’s flowing, wraithlike costumes adding the pitch-perfect visual touch); “Out There on the Road,” thanks in part to Leah Fox’s fine music direction, captures the energetic thrill of future possibilities in young Edward’s life; and Bills’ performance of “I Don’t Need a Roof” feels so achingly personal and heartfelt that even though the song’s lyrics don’t convey anything particularly new or profound, you nonetheless connect with Sandra as she begins the process of telling her beloved husband goodbye.

Indeed, Schramm’s whole cast is solid, and these occasional flashes of feeling are the result. Robinson’s vocals give Will’s character more soft edges and dimension (the character drawn by the script is a bit thin); and Bills does great work playing Sandra both as a young coed (or a wannabe circus performer, depending on the tale being told) and an aging, worried wife and mother. But it ultimately falls to Moan to find a way to make Edward, the central figure of Big Fish, a charming, lovable blowhard -- and perhaps predictably, for those who’ve seen Moan in a number of shows at Encore (and elsewhere in the area), the actor makes it look easy.

Yet it should be anything but.

After all, Edward is a man who agrees to honor his son’s lone request for his wedding day -- something that’s deeply personal and important to him -- and then breaks that promise because, well, he just can’t help himself. But Moan’s good-natured, winking sense of fun, that perpetual gleam in his eye, leads us to forgive Edward, as most others around him tend to do. Plus, the most harrowing moments of Edward’s illness are so well-executed by Moan that you’ll find yourself holding your breath as he appears to struggle to fill his own lungs.

But we’re never completely swept away in Edward’s living dreams, and this ultimately makes Big Fish feel like the one that got away.

“Big Fish” plays at Dexter’s Encore Theatre from April 26-May 20. For showtimes and ticket information, visit theencoretheatre.org or call 734-268-6200.