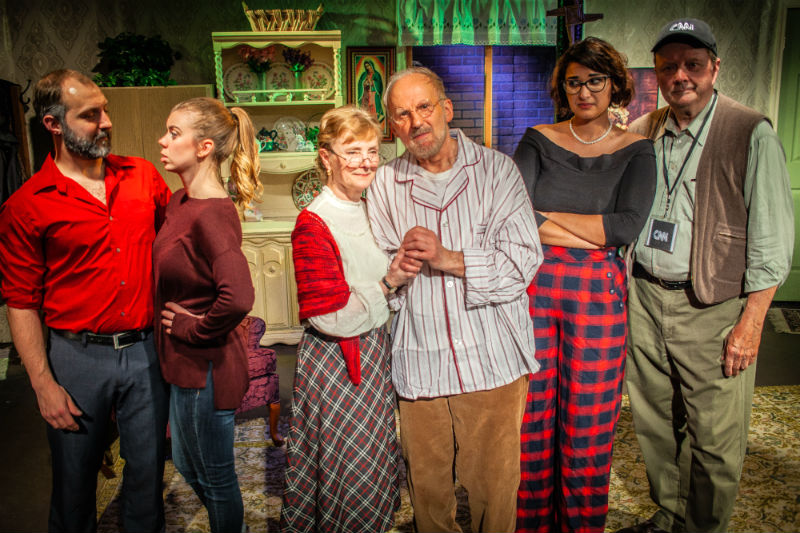 Sometimes when I’m standing in line at the drugstore feeling tired and angry that the cashier is a moron, I decide to get my revenge on life by impulse-buying a Baby Ruth bar. Mainly because it’s there and I don’t like Baby Ruth bars.

My decision to go to see Happy Birthday Dear Alice was exactly like that. I made up my mind to go 15 minutes before it started because I was feeling crabby and it was happening, and I figured maybe it wouldn’t be completely terrible. I arrived late. The audience was small. I assumed my revenge had succeeded -- this was clearly the Baby Ruth of theater.

Except that it isn’t. Happy Birthday Dear Alice is good.

It’s so good, if I can manage to find the time, I will go back to see it again. If I had the time (I won’t), I would go see it for a third round. It’s that good.

If you like theater at all, I strongly recommend that you go see this show.

The dark comedy by Irish playwright Bernard Farrell is about an older woman living alone whose adult children come to visit her once a year for her birthday. Every year they sing, they eat cake, and they try to shove her into a nursing home, mostly so that they can seize her house. It sounds like the outline for the next Tracy Letts play. Yet despite each child being more monstrous than the last, the play keeps its head above the murky nastiness of humanity by focusing instead on the flawed people who manage small acts of kindness.

There’s not a single bad actor in the cast. The story is uncomfortable in all the right ways, and precisely funny enough to almost offset the uncomfortable bits. The set is detailed, the costumes are on-point, the actors’ brogues are all close enough for my untrained ears. Like Kickshaw’s show Or from February, this play transcends being merely entertaining.

To describe the actors -- please excuse me while I go check my thesaurus for synonyms for "talented" and "wonderful." Ah yes, craft. When you go see this play, there’s an enormous amount of craft demonstrated onstage. Ellen Finch and Adrian Diffey are exceptional. The children, played by Hannah Niece, Eric Niece, Steven R. White, and Erin Hildebrandt, vary from decent to amazing. (And each one succeeded in making my skin crawl in slightly different ways.)

After the show, I had a chance to briefly talk with Adrian Diffey. He directed the show along with his wife Fran Potasnik and he also performs in it. He also produced it. And he co-designed the set for it. When we spoke, Diffey was, understandably, a little tired so it was a brief conversation, but what became clear very quickly was that this play was a project of love.

The theater company, Mind The Gap, originally began back in 2001 when Adrian and Fran were living in Luxembourg. When they moved to Michigan in 2013, their company moved with them. That explains why they often focus on fare that’s a little outside of the American mainstream, usually plays brought over from European playwrights.

I hope that the community of Ann Arbor will come out to see this show -- beyond the value of supporting local theater, Happy Birthday Dear Alice is well-performed and very smart. I might see you there.