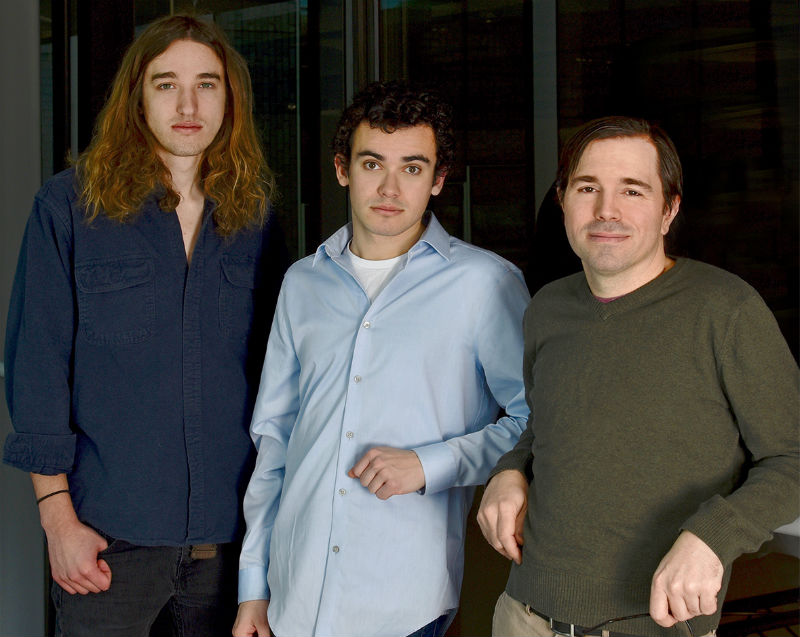 "There are so many tunes that I want to arrange for this group," he said. "I could quit everything and just arrange for guitar trios and probably be a pretty happy person doing it."

The challenges, he said, are "figuring out how to blend and also how to get voices to stand out. I realize that those are opposite challenges but they both come up."

Adam Kahana and Evan Veasey are Anest's partners in Ann Arbor Guitar Trio, whose debut album, Tides, is out May 17, which is also the day the group plays Kerrytown Concert House.

A2G3 isn't Anest's first fling with this type of lineup, having played in Josh Urist's Jericho Guitar Trio in 1996.

"[I] had so much fun doing it that I have always wanted to do another one," Anest said. "When I went back to school for my masters in 2015, I knew that it was a good opportunity to find a few other guitarists who could read and improvise. The skill set that is required for a group like the A2G3 is not a common one among guitarists. Each player has to be creative, a skilled reader and improviser, and good at accompanying. I picked Evan and Adam because they both have those skills in spades."

Versatility is key when working within guitar-trio parameters.

"[W]e all have to be able to perform multiple roles within a piece," Anest said. "We have to cover bass notes, chords, and melodic lines, and we need to be able to do that with a solid rhythmic underpinning. It can be quite challenging and we spend a lot of time in rehearsal making sure we are locking up rhythmically."

The CD begins with "Bright Size Life," one of the more popular songs by Metheny from his 1976 album of the same name. Where the original featured bassist Jaco Pastorius and drummer Bob Moses, giving the song its free-floating funk vibe, A2G3 focused on the song's beautiful melody. Metheny's version begins with him cranking through eight notes on his own, which Anest used to construct A2G3's slowly building intro.

Hocket -- alternating who plays the melody note -- is also featured on two other tracks on Tides.

"Evan has this great trick at the beginning of his arrangement of 'You Still Believe in Me' where one guitar plays the melody while the other two guitars play the same melody in hocket," Anest said. "On 'Stolen Moments' one guitar plays bass while the other two guitars are in four-part harmony. With two notes per guitar, I wanted the parts to blend as much as possible so I gave the first and third part to one guitar and the second and fourth part to the other guitar. It's a technique I use a lot to lock the parts together better."

Anest said the guitar trio format "allows for a great deal of exploration stylistically. We can play pop tunes, standards, modern improvised music, and we still sound like a guitar trio."

All of those elements are on Tides, which Anest annotates track by track below:

"Bright Size Life" – I wanted to explore hocket, where each note of the melody is played by a different person, with the opening line of this piece. So, if you listen to the intro, the first note is played by me, the second by Evan, the third by Adam, and that continues all the way up until the main theme comes in. After that, I continued to pass the melody around the group for the entire form and even used hocket again in a few places, such as the bridge. It was actually a very experimental arrangement, but I've always loved the tune and have wanted to arrange it for years.

"Be Good" – Evan brought this tune to the group and I think he just liked it and asked Abby if we could play it. He must have heard her playing it at UM at some point. We arranged it together in rehearsals from the lead sheet. There is no specific written out arrangement.

"Union Pacific" – Before the A2G3, I tried to put a trio together with a former student, Taylor Fetters, and another local guitar player, Brian Delaney. We rehearsed a few times but never got it off the ground. Brian brought "Union Pacific" to that group and when I formed the A2G3 I went back and listened to the original and transcribed the two guitar parts, played by Bill Frisell and Pat Metheny. It's just a nice swinging tune and it was one of the first tunes we played in this group.

"Circle of Life" – I saw Ellen Rowe play with her quintet at Kerrytown Concert House and I picked up her CD Courage Music at the show. The first track just really intrigued me and I immediately wanted to arrange it for the trio. It was actually quite an endeavor. Ellen was initially skeptical that a trio could do it justice, but I convinced her to give me a copy of her original lead sheet, and I spent a good deal of time working out the arrangement. It's actually more of a transcription. I wanted to stay as true to the original work as possible because Ellen was pretty adamant that everything in it was important.

"One and Done" – I played this tune on Malcolm Dean's graduate recital. He was a grad student a year before me and I really liked this composition. As with Ellen, he gave me his blessing to arrange it. I took some liberties with this piece that I didn't with Ellen's, adding a countermelody and some interlocking guitar parts and a key change.

"Stolen Moments" – This piece has the most amazing four-part harmony and I've always loved it. Usually when people play this tune they just play the melody and I feel that they don't do the work justice. This was my attempt to get the whole vibe of the tune in the arrangement. My original arrangement was not as close to the version from “The Blues and the Abstract Truth,” but when Adam started bringing my attention to that version I made some changes, so I have to give Adam and his amazing ear a lot of credit for the version that eventually came together.

"You Still Believe in Me" – Evan brought this piece to the group. He is a huge fan of the Beach Boys and plans to arrange the whole Pet Sounds album at some point. I'm glad that he is arranging for the group because the plan was never to have all of the arranging done by me. There are so many ways to write for guitars and I want as many perspectives as possible, which is also why we are hoping to commission some works in the future as well.

Ann Arbor Guitar Trio celebrates the release of its debut album, "Tides," at Kerrytown Concert House on Thursday, May 17. Visit kerrytownconcerthouse.com for tickets and annarborguitartrio.com to keep up with the group's activities.