Michigan favorites Steppin’ In It celebrate 20 years at The Ark 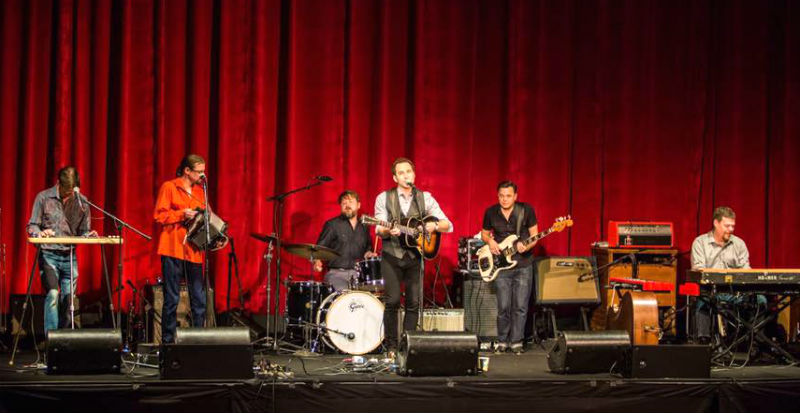 Years ago in Lansing, a group of guys got together and formed a roots-music band that combined vintage sounds and modern sensibilities. Called Steppin’ In It, the band built up a devoted audience and critical respect in Michigan and beyond as its sound and its songs deepened and matured.

Now, the band itself has become somewhat vintage: Steppin’ In It is marking its 20th anniversary and doing a short concert tour to celebrate, including a May 20 date at The Ark.

In recent years, the band’s core members have established very successful individual careers. In particular, lead singer/guitarist Joshua Davis has become well known as a solo act, notably placing third in NBC’s singing competition The Voice and becoming the first contestant to sing an original composition on the show. Bassist Dominic John Davis, meanwhile, has worked extensively with rocker Jack White, among others. In fact, the members have become so busy individually that they no longer perform together as Steppin’ In It very often, so the current tour is highly anticipated by their still-loyal fan base.

Q: When Steppin’ In It first got together as a band, were you thinking it might have the sort of staying power that would lead to a 20th-anniversary tour?
Dominic: When we first got together I don’t think I had any ambitions that weren’t related to music. I loved blues, roots, and folk music so much I just wanted to be in a band that did something more for each. My vision was always to bring those styles of music into today’s world. Sort of a musical time machine.
Joshua: I knew we had something special from the get-go, but I wasn’t sure if anyone else would think so! These guys are my brothers and I feel honored to have shared the past 20 years with them.

Q: How did the band first get together?
Dominic: Our harmonica player, Andy Wilson, and I were playing in some blues bands around Lansing. We were looking to start a new group and had been bouncing around trying out different singers and guitar players. We met Joshua and our first rehearsal was really special. Randomly meeting someone who was into the same kinds of music was special enough, but I also could tell he had a handle on songwriting. He had a few tunes he had written with some country blues guitar influence. That sealed the deal for me. We played some Mississippi John Hurt and I was sold.

Q: How did being from Michigan influence the sound and overall approach of the band?
Dominic: I don’t think we would have been playing the music we were playing if we hadn’t been from Michigan. [Lansing music store] Elderly Instruments was such a huge influence on all of us. We would borrow all sorts of instruments and study traditional styles that used them. Plus, the scene here is so encouraging. We would see other bands on tour and it made it all seem possible.

Q: Since the start of Steppin’ In It, you’ve both seen your careers take some amazing turns, including Joshua becoming a finalist on NBC’s The Voice and Dominic recently appearing on Saturday Night Live with Jack White. How did your years in Steppin’ In It lead to, or prepare you for, your careers right now?
Joshua: We grew up together musically and I always needed to stretch and to work my ass off, because I was constantly surrounded by better players. That being said, I think the most important lesson I learned was that it’s so important to surround yourself with good people. There’s a ton of talent out there, but if you’re not working with people whose hearts are in it, you’ve got nothing.
Dominic: I’ve become somewhat of a singer’s bassist. Backing singer/songwriters is basically what I do best and what most people ask me to do. I essentially learned to do that with Steppin’ In It. Plus, we’ve played every gig imaginable! I think I prepared for everything.

Q: It seems to me that Ann Arbor has always embraced Steppin’ In It, and you’ve played The Ark, in particular, a number of times. How would you describe the role of this city and this venue in your history as a band?
Joshua: We love The Ark. It was an early blueprint for the kind of gig we wanted to play. Moving from the bars and clubs to listening rooms was a huge step for us. We always kept the Green Door (in Lansing, where the band had a regular Monday residency), but the listening rooms were our favorite.
Dominic: The Ark was our first proper show. They sell tickets in advance (and actually advertise!). It isn’t a loud bar. In a lot of ways, we got our sea legs there. The Ark has always felt like home and I always look forward to returning.

Q: You’ve played in different configurations over the years -- a four-piece group, a six-piece group, Shout Sister Shout with Rachael Davis -- what’s the lineup for the reunion tour? Are you planning any surprises or special guests?
Dominic: We’ll have our original six-piece lineup: myself and Joshua, twin brothers Andy and Joe Wilson on harmonica and slide, along with my rhythm-section pals Mike Lynch on keys and Geoff Lewis on drums. I haven’t played with these guys in a few years so I imagine there will be some sit-ins!

Q: How is the tour setlist shaping up? Are you drawing from the band’s entire history? Will you largely stick to a standard list throughout the tour, or do you expect to switch things up from night to night?
Joshua: I miss playing so many of these songs, so we’ll be playing a bunch of those, but this band thrives on improvisation and flying by the seat of our pants. So the setlists will be different every night and I’m sure there will be plenty of surprises. Even for us.

Q: How would you describe the status of Steppin’ In It at this point? You all have demanding and successful careers aside from the band -- do you think you’ll continue to occasionally get back together in the future?
Dominic: We all love seeing each other and playing together but I think it’s getting more and more difficult to arrange Steppin’ In It shows. All of the guys are busy and I live 600 miles away. In my mind, we simply had to do these shows because we’ve been doing it for 20 years. We’ve earned it!
Joshua: I don’t think we’ll ever stop playing together. The gigs may be a year apart or more, but playing with these guys is like coming back home. I can’t imagine ever playing our “last” gig.

Q: How would you rate the health of the Michigan music scene at this point in time? Any particular favorites out there you’d like to plug?
Joshua: The Michigan music scene is vibrant and strong because it’s collaborative. It’s a community built on reciprocal enthusiasm and there’s an attitude of pushing the whole thing forward rather than just getting ahead yourself. There’s also a big focus on value-driven music. I think many of us see that music can bring people together and help fuel positive change, so I’m proud to be a small part of that. There are too many Michigan acts that I love, but currently, May Erlewine and The Go Rounds are my faves.
Dominic: I love the Michigan music scene because it’s fairly insular. It’s the peninsula thing! You have to make a concerted effort to get here because you certainly aren’t driving west to Milwaukee after playing Grand Rapids. I have my favorites here: Jen Sygit, The Barbarossa Brothers, Peter Madcat Ruth. So much has happened since I moved six years ago. I LOVE Greta Van Fleet and The War & Treaty.