Patterns in the Process: “Sara Adlerstein: Ecologies, my true colors” at WSG Gallery 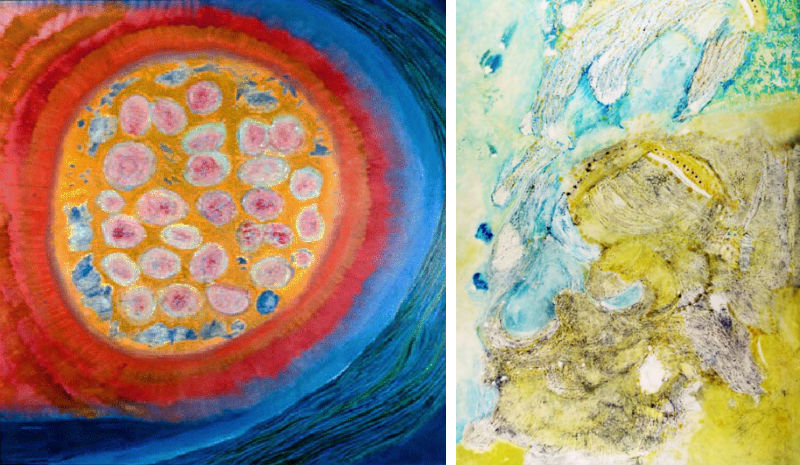 An applied aquatic ecologist and current faculty member at the University of Michigan School of Natural Resources and Environment, Adlerstein hasn’t pursued formal training in the arts. Rather, she says she’s has been painting for as long as she’s been a scientist. “Art and science belong together as naturally as air and water,” Adlerstein wrote in her artist's statement

Her art, she wrote, is “searching for patterns within the creative process" and Ecologies is a collection of paintings whose “images reflect on the beauty of life forms I know from my experience as a human and scientist. ... These are visions that exist in a place in my heart ... influencing my approach: observation, experimentation, improvisation.”

Adlerstein’s developed a mixed media technique on Masonite she finds “magical, nurturing and informative.” She says she uses these techniques -- as sort of magic realism -- “to communicate concerns, dreams, and emotions, all of which emerge from my deep and relentless love for life.” And indeed, these “concerns, dreams, and emotions” make Adlerstein’s compositions as energetic as they appear.

A contrast of the exhibit's Milk Weeds, Weeds and Seeds of to Come illustrate the range of Adlerstein’s embellishment, as she’s as apt to tip the scale of her creativity toward imagination as she is to depict reality.

With Milk Weeds, Weeds, one can easily infer vegetative representation in its energetic gesture, but doing so would also lose the collision of fact and reverie in Adlerstein’s controlled frenzy. Her artistic side is illustrated in the work’s pile-up of scrubbed primary color pigment: slashing swirls of competing blues and yellows that blend into a particularly fertile vegetative green in the work’s upper-left corner. Whereas Adlerstein’s scientific side depicts a fanciful moment of pollination, offering a symbolic origin story of plant reproductive life that’s revealed in the painting’s accumulation of grounded impasto in this spiraling composition. Yet there’s also a straining against convention in the pronounced ebullience of her facture.

By contrast, Seeds of to Come is pure surreal fantasy funneled through the straight lace of biology. A circle of embroidered lush vegetation surrounds a red base of nascent seeds nestled within the painting’s orange division. In the hands of a less imaginative artist, this depiction might be enough to exemplify intent. But Adlerstein’s lack of formal training allows her an intuitive flash of Art Brut that decisively makes the work far more unusual than this. For each of these two dozen seeds, the work is built of a gummy casing affixed to the painting’s working surface -- seeming as much an embryo as a seed. Their capillaries link internally through what appears to be the umbilical walls of membrane-enclosed divisions.

Seeds of to Come is not quite science fiction, science fact, or sheer fantasy. It instead reflects Adlerstein’s self-definition of how to craft balanced art where, in her words, “You have to slow down. To contemplate. To dig, down, deep. Create connections.”

Adlerstein doesn’t see her subject matter as representative or abstracted art. Rather, each work is an organic process whose lifecycle is revealed through gesture and color. Each large-scale work in the stimulating Ecology fulfills these criteria.