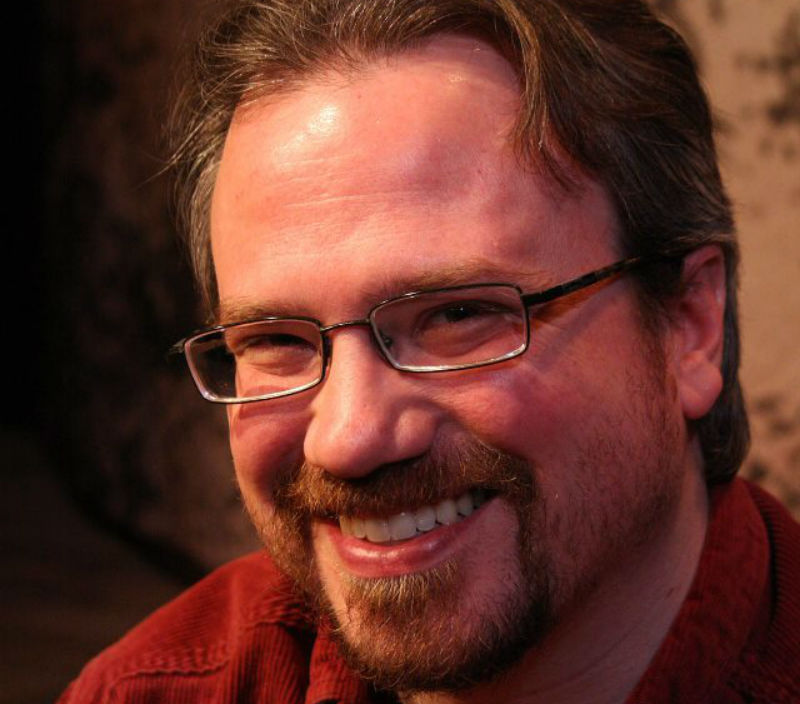 Joseph Zettelmaier is a busy man.

The playwright teaches at Eastern Michigan University, is executive director of a theater company, and will soon have three of his numerous plays on stage locally.

Zettelmaier has written more than a score of plays that have been staged regionally and as far away as Calgary, Alberta, and Dublin, Ireland. He’s written comedies, dramas, science fiction, mysteries, and horror.

Zettelmaier studied acting and directing at EMU and was planning on pursuing a career as an actor, but his curiosity and some notable encouragement made him a playwright.

“Right out of college, I got an apprenticeship at the Purple Rose Theatre. And while I was there, they did what they call a 'dark night' where the apprentices put on their own show and they asked us if anyone was interested in writing something,” Zettelmaier said. “I had never done it before, but I thought I’d give it a shot. I did a one-act play and it was a halfway decent attempt. Jeff Daniels came to me and said, 'Give me 100 pages,' and when Jeff asks for 100 pages, you give him 100 pages.”

More good luck came when noted playwright Lanford Wilson (Hot’l Baltimore and other plays) came to the Purple Rose to help on a production of a new play. Wilson didn’t drive so Zettelmaier was recruited to chauffer Wilson around for six weeks.

“So here was this 22-year-old interested in playwriting and driving a Pulitzer Prize-winning playwright around for six weeks,” Zettelmaier said. “I couldn’t begin to tell you how much advice and help he gave me.”

As a teacher at EMU, Zettelmaier is passing along his own help and advice on what he has learned as a successful playwright.

“The first thing I like to tell my students right off the bat is that I have no expectations, that I feel my job is to help them find their specific, individual voices and then give them tools to let their voices be heard,” he said.

He also has a counterintuitive bit of advice to encourage his students to try to see the big picture.

“You’ve heard that old saying to 'write what you know' and I honestly think that is some of the worst writing advice you can give to somebody,” he said. “Your story has to be bigger than yourself. That mentality of write what you know excludes imagination, which I think is vitally important to what you write. What I always tell students is to write about what moves you and learn what you need to know.”

Zettelmaier is the executive director of the Roustabout Theatre Troupe, which is presenting All Childish Things at the Milan High School’s Dennis McComb Arts Center.

“We started it about almost exactly two years ago as a collaboration of myself with Joey Albright as artistic director and Ann Simmons, who is managing director,” Zettelmaier said. “We’ve been friends and collaborators for many years and we decided to explore this project with the idea of bringing theater to a wide variety of places with a wide variety of styles and kind of do things that people might not think of as conventional theater. And, it’s worked well.”

Zettelmaier said #All Childish Things# is “far and away my most popular play.”

“It’s been produced all over the country and outside the country,” he said.

All Childish Things is a comedy about a group of down on their luck longtime friends and #Star Wars# fans who plot to steal valuable movie memorabilia and sell it to a wealthy anonymous buyer “with the hope of turning their lives around.”

“Nothing goes remotely the way it was planned,” Zettelmaier said.

The Gravedigger: A Frankenstein Play will be presented by the Penny Seats Theatre at Ann Arbor’s West Park.

“I always refer to The Gravedigger as a missing chapter of the novel,” Zettelmaier. “It’s a wonderful, wonderful novel but the monster is surprisingly not in it very much.”

The Gravedigger takes place after the monster has destroyed Dr. Frankenstein’s life. He is drawn to an old Bavarian cemetery where is befriended by the cemetery’s old gravedigger and groundskeeper.

“They develop an unusual friendship that is exactly what each needs and it’s a play about the monster finding his soul,” he said.

Joey Albright will be directing All Childish Things and Zettelmaier said he and Albright have a good working relationship.

“We have a familiar shorthand with each other,” he said.  “When I walk into a rehearsal and see the things he’s done, I think, 'Wow, that’s exactly what I had in mind.'”

The playwright said he enjoys being involved in productions by other companies and is always available to give advice or answer questions.

While the original plan for The Roustabout Theatre Troupe is to take their show on the road, the three partners would like to have their own theater one day.

“It doesn’t mean we’re not going to take theater to other places as well, but we want a permanent space that is a big part of our goal. It just makes, on a lot of levels, what we’re trying to do more effective, “ Zettelmaier said.

For now, the plan is to do three or four productions a year of classic plays, plays by regional playwrights and, on occasion, a Joseph Zettelmaier play.