Scott W. Stern on Sex, Surveillance, and Suppression in "The Trials of Nina McCall" 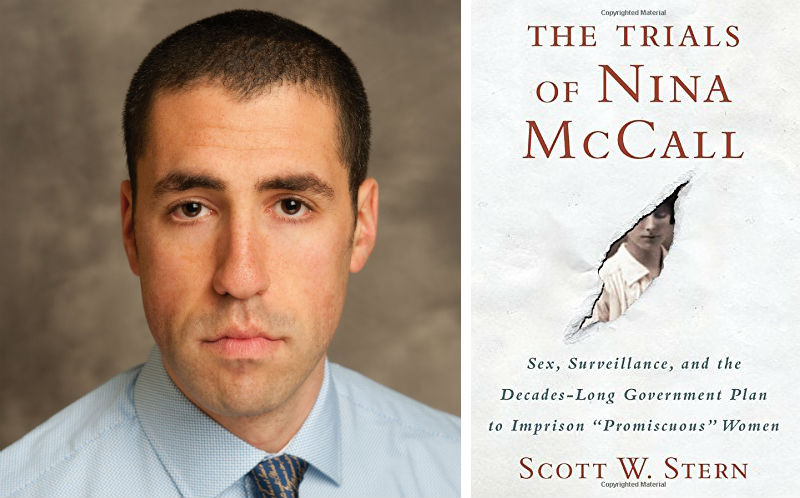 You've probably never heard of the American Plan. It isn't something that is talked about in most college history classes or in high schools’ curricula. The name sounds benign at first glance -- maybe it was a plan to help Americans overcome some obstacle or temporary setback in life?

The American Plan allowed local municipalities, law enforcement, and health agencies to round up women suspected of having sexually transmitted infections (STIs), assumed to be prostitutes, or just considered “promiscuous” and throw them in jail to "treat" them. The women rarely received the benefit of due process and were often imprisoned for years, exploited and subject to abuse.

Most people have never heard of the American Plan, but Scott W. Stern aims to change that with his new book, The Trials of Nina McCall: Sex, Surveillance, and the Decades-Long Government Plan to Imprison Promiscuous Women.

Stern first learned about the American Plan when he took a college course about media and medicine in modern America. “In the second week of the course, my professor talked about how difficult it was to treat sexually transmitted infections (STI) in the early 20th century," Stern says. "It was so stigmatized that the surgeon general couldn’t even say the word ‘syphilis’ on the radio.”

When Stern’s professor called the program “concentration camps for prostitutes,” Stern realized he had to learn more about what happened. Initial internet searches turned up nothing so Stern researched further and learned about this decades-long program that imprisoned hundreds of thousands of women.

Stern says that the impetus for this plan came from the same folks who ran Ireland's Magdalene laundries, institutions of confinement, usually run by Roman Catholic orders. Stern talks of the mid-19th-century campaigns to “reform” promiscuous or “fallen women,” saying that “many of those proponents [of Magdalene asylums] came to American and spread their ideology … and this eventually led to the American Plan.”

But they weren’t the only supporters of the American Plan. Some of its fans included John D. Rockefeller Jr., Supreme Court Justice Earl Warren, and even First Lady Eleanor Roosevelt.

Stern believes there are several reasons for the public's lack of knowledge about the American Plan. “Just finding out how each state handled this program was a challenge," he says. "Since it wasn't a federal program, I had to go to each state and research its archives. Kansas handled it differently than Michigan, which handled it differently than New York and so on. There was no one federal agency or location from which to get the information.”

Another reason is that the people who were victimized by the American Plan had their voices systematically suppressed. “The women’s letters home were either censored or forbidden entirely," Stern says. "Many institutions did not allow visitors. Even after release, [the women] were so stigmatized that they would face consequences if they spoke about it -- they might be denied jobs or housing or be rejected by potential mates.”

While there were hundreds of thousands of women who were wronged, Stern's book focuses on the survivor Nina McCall who spent three grueling months in a detention hospital where she endured forced labor and injections of mercury. The book follows McCall and others like her who did whatever they had to do to escape -- including jumps over barbed-wire fences and leaps from moving trains. Some of the courageous women like McCall even fought back by suing their former captors.

McCall passed away long before Stern’s research and left no known descendants. “Unlike many women of her era, Nina did not have children and neither did her husband, brother, or her husband’s siblings,” Stern says. Further, “very few records of these institutions exist and those that do are often highly restricted." In an attempt to find anyone who knew McCall, Stern even went door-to-door in some of the neighborhoods where the woman lived but could not find anyone who had known this brave young woman.

The book started as a thesis for McCall and quickly grew into a "labor of love" that took about seven years to complete. Stern is now a law student but is still dedicated to social issues. “I’m studying environmental law,” Stern says. “So while it isn’t directly related to the book, it’s still a fight for justice.”

Scott W. Stern will discuss his book at Literati on May 29 at 7 pm.