All in the Family: Redbud Productions' "If I Forget" finds the flaws 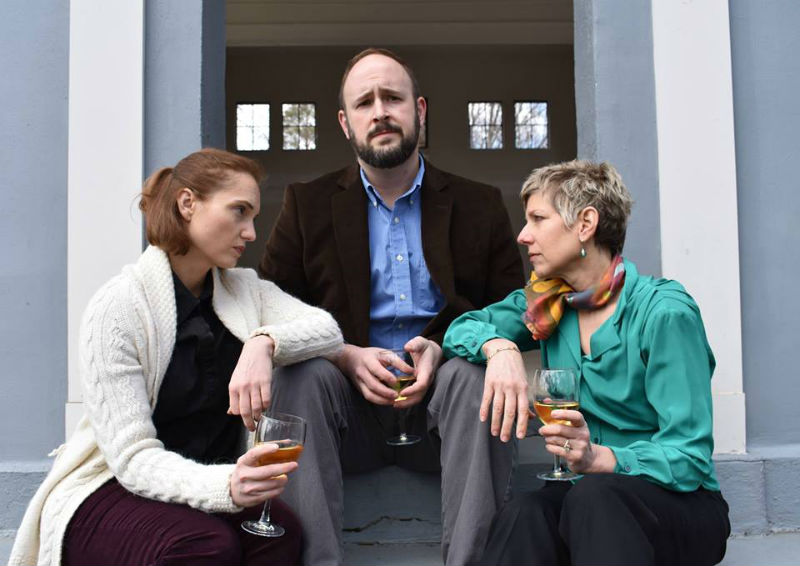 Ann Arbor's Redbud Productions usually picks the plays it wants to produce via what co-founders Loretta and Tim Grimes discover during their regular trips to New York City. Next spring the group is staging The Herd and its current production is If I Forget. Both plays are about birthday parties, which are supposed to be fun and funny, but they're not.

“We choose a lot of plays about families," says Tim. "Both of these are happy birthday parties that aren’t actually happy.”

That statement succinctly describes the complicated, intense drama of If I Forget and also the seriousness behind Redbuds' selections.

“I always like plays that challenge me to think. That stretch me a little bit, to look at something from a different perspective,” explains Loretta, the director of If I Forget, which was written by Tony Award winner Steven Levenson (Dear Even Hansen). “I think that this play really does that. Tim and I both don’t like plays that are wrapped up with a pretty little bow at the end. ... You take a little piece of it away with you. You chew on it, and think about it, and process it, and that’s the beauty of being able to tell a story that really resonates with people, they take a little piece of it home with them.”

The play has a cast of seven, which is very large for most modern non-musicals and especially for a Redbud production. Trying to block seven people, especially when they’re all onstage at the same time, becomes something like a choreographed dance given the size of the stage and the intimateness of the space. But at least all the actors are familiar with one another since they all workshopped with Redbud before the play was cast. “And all the people behind the scenes have taken our class,” Tim adds.

“There’s a lot of actors. So it’s making sure that each actor gets what they need from me," Loretta says. "It’s just making sure that I do justice to the beauty of the writing. I think that’s really important. And that we able to create these really three-dimensional, flawed, layered people.”

Redbud's previous play, Nice Girl, was about a daughter who was taking care of her mother and trying to figure out what to do with her life. If I Forget is about a family who are divided on the whole issue of how to best care for their father and what the future of the family should look like.

“Act I takes place in 2000. Act II takes place in 2001, right before 9/11," says Tim, who plays the role of the aging father Lou. "But so many of the issues, political and otherwise, that are going on with the country at that time are still very topical today.”

If I Forget starts with three siblings reuniting -- played by Dave Barker, Melissa Stewart, and Susan Todoroff -- to celebrate their aged father’s birthday. His health is failing, but he’s still rallying. The estranged son and Lou have a very strained relationship. "There’s this undercurrent of love," Tim says, "but they have so many issues with each other that they can’t get above and beyond that."

“Everyone [in the play] is sort of at a crossroads," Loretta says. "We don’t just arrive at a certain age and then it’s smooth sailing from then on in. Wouldn’t it be nice? I think it’s those crossroads, those times that we’re challenged, that we really grow as a person. ... [A]ll of these siblings are there and I find that really compelling to see. How do you adjust to that crossroad? Do you go through it, do you go around it? How do you rise to that challenge? I think in this play, it’s something I really relate to.”

All the characters are deeply flawed, Tim says, "and that’s what we like about it.”

“It’s sort of my job to bring out those flaws," add Loretta, "but also soften the edges a little bit. No one is inherently good or bad. And I think it’s really important that at the core, an audience sees a character’s vulnerability. Because I think everybody connects to that. You can be a certain way -- you can act a certain way that isn’t kind or nice -- but if you see that person’s vulnerability, I think that we forgive people. And I tried really hard to create three-dimensional characters who are flawed, but not so flawed that we can’t see that vulnerability and those softer edges.”

Redbud Productions' staging of "If I Forget" happens 8 pm nightly May 31-June 2 at Kerrytown Concert House, 415 N. Fourth Ave., Ann Arbor. General tickets are $20, student tickets are $15, and limited front row café table seating for groups of two to three are available for $25 a seat. For reservations, call 734-769-2999 or visit kerrytownconcerthouse.com.