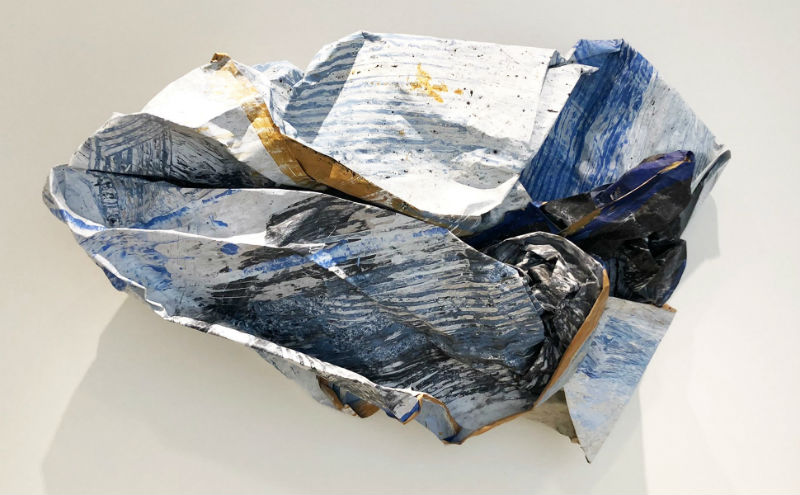 Paintings and public sculptures by prominent contemporary artist Allie McGhee abound throughout Detroit. His elegantly gestural Night Rhythms (1991) can be seen at the Detroit Institute of Art. The Michigan-Cass Avenue stop on the People Mover features his work, and right now, a small but exquisite sliver of his decades-long body of work, Cosmic Images 2000, is on view at the Rotunda Gallery in Building 18 of University of Michigan's North Campus Research Center in Ann Arbor through August 31.

McGhee was born in Charleston, W.V., but soon moved to Detroit, where he attended Cass Technical High school. He completed his undergraduate work at Eastern Michigan University in 1965. His early paintings and sculptures were figurative and even as he has moved toward abstraction, his work has retained the gestural sweep of his unseen arm.

In Cosmic Images 2000, McGhee readjusts his gaze from the terrestrial to the heavenly. "As an artist, I have always been inspired by the diverse rhythms of our environment,” McGhee says. “It has been a great reserve of energy for my work. In my recent works instead of seeing the natural world as a rational observer, I see it from within as if through a telescope or microscope.” The artworks in this exhibit were created from 2000 to 2012 and are typical of his recent work. McGhee is a master at using unorthodox paints and materials that impart grittiness and immediacy to the sophistication of his post-minimalist, abstract compositions. He pours, spatters, drags, and drips pigments in various viscosities with sundry additives on a wide range of grounds, using self-made notched, hard-edged implements of his own devising. Silver Circle is a case in point, its hardware store aluminum paint bestowing an air of improbable elegance against an aquamarine background. Cloud Nine, which is only one example of a much larger previous series, creates the airy illusion of billowing cumulus with only crumpled paper and paint. My favorite work in the show, Cool Blue, Red Hot, is only 2 feet square but seems determined to expand beyond its borders to infinity and beyond, propelled by an energetic swirl of Superman colors.

McGhee often compares his work to jazz improvisation: the shapes and colors are his recurring themes, looping and repeating themselves within a given composition. He explains, “What you can do as an artist, whether it’s painting or music, is create repetition or rhythm so a person can accept it as being something knowledgeable instead of chaos. I’ve even discovered that chaos is not the way we’ve assumed it to be, but it is ordered as well -- that is the element behind creativity that people don’t consider.”

McGhee speaks the language of contemporary visual art fluently and maintains a 364-day-a-year art practice in his studio near Detroit’s Belle Isle Park. (He takes Christmas off.) He was recently featured in the third annual Art+Science Project at the University of Michigan Museum of Art, and his work can also be seen through June 16 at the Hill Gallery in Birmingham, Mich., and in McArthur Binion Curates in Detroit, where he shares the gallery walls with some of the city’s most talented artists. McGhee will soon receive wider recognition for his lifetime of achievement as an artist when he is honored, along with fiber artist Carole Harris, during Detroit Art Week this summer. On July 20 at the Detroit Institute of Art, Harris and McGhee will speak about their lives as Detroit creatives, its trials and rewards, and how art can play a role in community building. (For more information, visit dia.org.)

In the meantime, Cosmic Images 2000 offers a glimpse of Allie McGhee’s voyage from earth to the stars, right here in Ann Arbor.

Allie McGhee's "Cosmic Images 2000" is at the Rotunda Gallery in U-M's North Campus Research Complex, 2800 Plymouth Rd., Building 18, Ann Arbor, through August 31. The exhibition is free and the gallery is open 9 am to 5:30 pm, Monday-Friday.

Amazing Article, Allie McGhee is such a great Artist and creative as well. I found so much art in the online portal, although i am manufacturer and supplier of tube sheet heat exchanger (
www.eworldtrade.com/products/heat-tube-exchanger/ ) so much recommend you to try their product to make any type of tube sheet art because they have very fine product and also in very affordable rates. Btw Amazing Article and Thanks for Posting.

Myhomeworkwriters is a group of academic writing experts who help students to do their homework. High-quality custom papers at affordable price