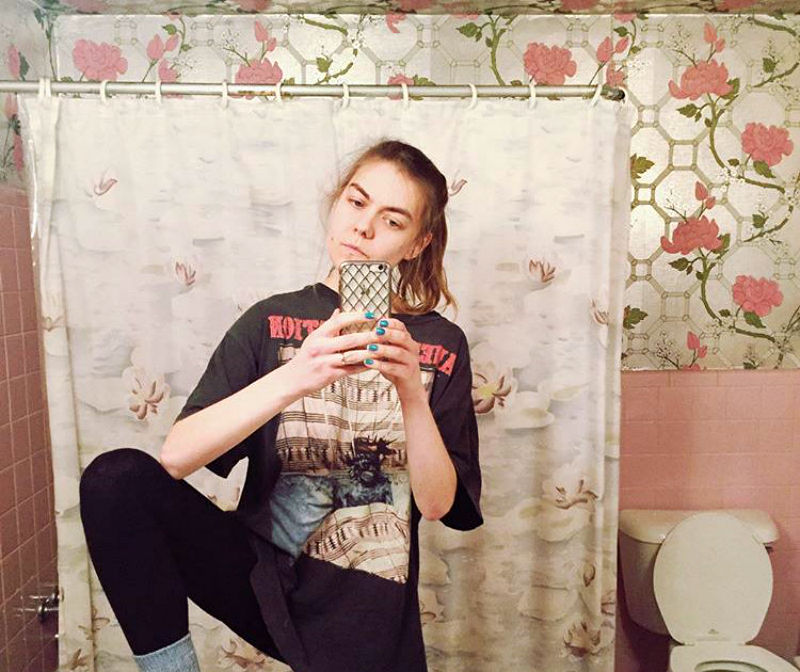 Considering her namesake, Emily Roll was destined to be a writer.

"I was named after Emily Dickinson and always felt a strong connection to her poetry," said Roll. "When I got older I started writing poetry of my own and later took an extensive experimental acting class and realized that making my poems three dimensional was when I really found my creative voice."

The 3D came as spoken-word stories and poems, a form that the Ann Arbor resident has been exploring since 2012. She recently posted a large body of her work to Bandcamp and it's surprisingly musical -- and not just because she sometimes backs her words with synths and throws in a few cover tunes. Roll's voice invites listeners into her intimate world akin to what a singer does with a ballad.

Most of Roll's work is deeply personal, and her writing picks apart the fleeting emotional thoughts we all have. But she's able to hit pause and analyze those moments in a compelling and open manner.

"I'm a pretty obsessive/compulsive person who can't let a lot of things go," she said, "so thoughts, ways I wish things would have been different, memories from my whole life are always circling in my head at all times. My work helps me let go these out of an idea that's so painful I can't otherwise shake them. I usually open a Word document and write for a really long time. Days, weeks, months -- as long as it takes for a really strong idea to stand out. Then an image of a performance will come into my mind and if I like it enough, I'll start building off of the idea until it becomes a reality."

Her piece “Today” from Obsessions Never Materialize (Misc. Pieces 2014 - 2018) feels like all those fleeting moments in a day are crossing her mind at once. A lot of her writing indicates she's someone who feels and senses everything, hyperaware, which means her brain has to parse the sensations whether she wants to parse them or not.

"That's pretty accurate," Roll said. "One day you wake up and you're an adult with a place that you live, laundry to do, your job, and also all these wishes from your childhood, interactions with people that are unpleasant and confusing. I'm always trying to make sense of all of that. There are themes for me that stick out all the time -- things I wish I'd done differently, regrets from ways I acted in my early 20s, having met so many people and lived so many places and not knowing what to do with all those experiences, where all those people went. Another set of themes that come up for me a lot is why some people are allowed to be so awful, questioning if I'm too nice and insecurities around how I'm perceived."

Roll allows you to feel her unadulterated emotions and doesn't shy away from being vulnerable, but her spoken word doesn't come across as uncomfortable or unnerving on stage. She presents as calm and collected, her earnest eyes seemingly connecting with each person as she surveys the audience.

"My work on the stage has always been a completely safe place for me to be as vulnerable as I need to be," she said. "I feel pretty transparent in my work and it's never felt super risky for me to do that in a creative space. In this way, I'm happy to have never pulled back in expressing any aspect of myself."

Her writing also works on the page, which she's presented in two 'zines: 2017's 21st Grade and 2018's Attached. Her printed stories are more like snapshots than her larger spoken-word portraits, but they are equally inviting and honest.

"Both ['zines] grew out of boredom in a really stressful grad-school time," said, who graduated with a masters in mental health from Concordia University in Montreal. "Attached specifically came out of a summer of crippling depression and I just felt like I needed to make something. The format of a 'zine seems most accessible for me at the time. I just completed a really intense and emotional grad program which brought up a lot of memories for me, thus the exploration of these memories."

The words in Attached are punctuated by random pictures -- maps, house, tree -- gathered more for their convenience than meaning.

"The images were literally whatever was lying around," Roll said. "Scraps from magazines, booklets, catalogs, newspapers. They were only images I was drawn to at first sight."

Emily Roll and Fred Thomas read from their new 'zines and Kat Gardiner reads from her new book, "Little Wonder," at Today Clothing, 215 S. 4th Ave., Ann Arbor, at 7 pm on Friday, June 8. Visit the Facebook event page for more info. Roll's spoken-word recordings are available at emilyroll.bandcamp.com. Her 'zines will be available at the reading, or you can message her on Twitter or Facebook.