Raining in the Race: Conquering the 2018 Dexter-Ann Arbor Half Marathon 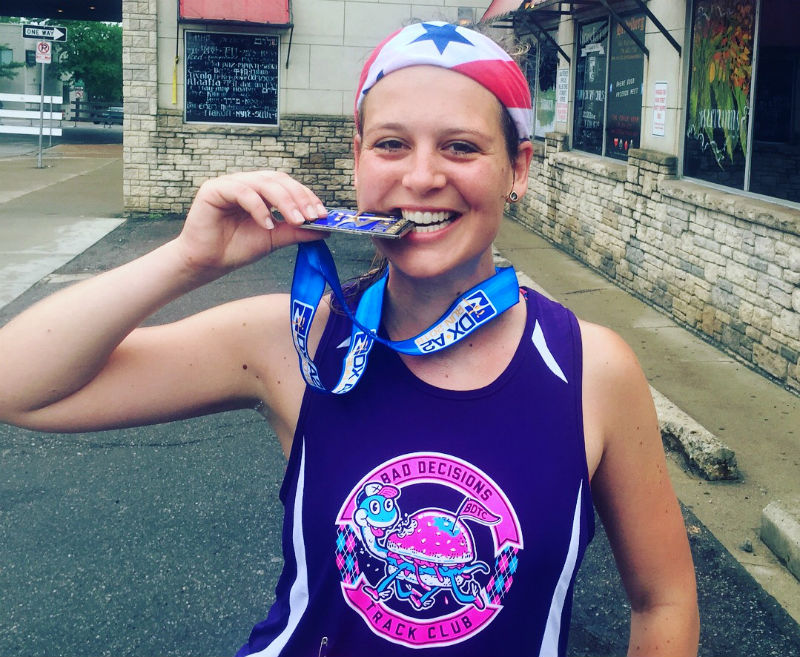 The Dexter-Ann Arbor Half Marathon (DXA2), which takes runners along the beautiful Huron River Drive, is a staple in the area the first Sunday of June each year. It’s a particularly special race because - unlike most races that have to be a loop or an out-and-back route so that the start and finish are in the same spot -- DXA2 takes runners from downtown Dexter to downtown Ann Arbor with no return. This requires much coordination by race organizers, as many runners opt to be shuttled on school buses from Ann Arbor to Dexter for the race start at Creekside Middle School. I’ve always been impressed with how smoothly this all works out.

I first ran DXA2 in 2015 for an embarrassing reason: I am among those for whom getting up early is an entirely unfamiliar feat. Unlike most races, which start at the godforsaken hour of 6 or 7 am, DXA2 doesn’t start until 8:30 am to accommodate for the passenger train that crosses the course in downtown Dexter and comes through around 8 am every morning. “PERFECT,” I thought to myself.

Back then, I was living in Ann Arbor, so I took the shuttle buses into Dexter for the start of the race. It was raining torrentially, so runners crowded the halls of the middle school, snacking, changing, sleeping, and chatting with each other while waiting for the race start. I ran fine that year but there wasn’t a single break in the rain for the entire 13.1 miles. That was the first year that we started our family tradition of going to the Broken Egg restaurant on Main Street in Ann Arbor after I finished running. “Run fast so that we don’t have to wait in line at the ‘Busted’ Egg,” my dad told me before I started. “Glad you’ve got your priorities in order,” I told him. I shivered my way through breakfast even though I had brought a change of clothes and felt like I didn’t get fully dry for three days.

In 2016, I ran DXA2 again, but it was brutally humid and I went out too fast. I finished the race but concluded the morning by throwing up out (mostly) the window of a car all of the orange juice that my dad had forced me to drink at the Broken Egg. I decided it was time for a year off from DXA2.

By this year, I was ready to attempt the race again, and I was determined to enjoy it. Most everyone running DXA2 is out to have fun and many groups actually travel from far away to run this race together. Although I wasn’t running with anyone in particular, I was excited to see who I would encounter along the way and to enjoy the course, which is truly beautiful. I was particularly happy because, now that I live in Dexter, I could literally stumble out of bed and onto the starting line without thinking (or really opening my eyes).

Race day morning dawned rainy and gloomy and it poured while we waited at the starting line. Still, the energy at this race is unlike hardly any other half marathon that I’ve done. So many runners return to do it every year and excitedly encounter one another either at the start or somewhere along the route. Even as we all got drenched, people were high fiving and cheering as the start time inched closer.

Once we were finally off, the rain was more of a blessing than a curse, keeping things cool and the humidity down. The first few miles of the race are always pretty crowded and it’s easy to go out too fast or to get stuck behind a slower moving group and get frustrated. I find it best to try and relax and save the maneuvering for once the two-mile mark has passed.

It’s super fun to head through downtown Dexter because a big crowd gathers there to cheer people on. I looked enviously at people sitting in their pajamas on their front porches drinking steaming mugs of coffee (that might actually be the best way to participate in the DXA2 run). Once you hit Huron River Drive, it’s a long, rolling straightaway into Downtown Ann Arbor, which is nice because you can really enjoy the scenery without having to worry about turns or terrain changes. For a while, I ran behind two men from Germany who were particularly excited about the course. One had never been to Michigan before and was delighted with the landscape, which made this die-hard Michigander very proud.

As mentioned, the DXA2 run is extremely well-organized with aid stations every couple of miles staffed by enthusiastic volunteers, many in costumes (I saw several bananas and a unicorn). My favorite aid station was one about halfway through where the volunteers were blasting Pitbull from a giant speaker. Unfortunately, because the entire road is closed for the race, spectating can be difficult. There are only five or six designated spectator areas and several can be tough to get to if you don’t arrive early enough. My dad waited at the Zeeb Rd. intersection, a great spot to cheer about 5.5 miles in with lots of parking and space to stand. I also enjoyed one man who lived along Huron River Drive who was earnestly standing by the side of the road in his robe and giving personalized encouragement to runners who passed him. “That’s an excellent pace,” he called to me. “I couldn’t run that fast if you paid me!” (Again, I wondered if perhaps he was participating in the DXA2 run in the smartest manner.)

There are a couple big hills on the course: two on Huron River Drive and one on Main at the finish. No one would describe the first two as “fun,” but the last one is particularly tough. Even with the finish line in sight, slogging up Main all the way from the M-14 intersection has never been my favorite. I could tell other runners were in the same boat. “Well, this sucks,” one woman said to me as we crossed under the railroad bridge and started up the Main Street hill in earnest. “You’re telling me,” I responded. Tons of proud friends and family members line the straightaway to the finish, though, and it makes even a very tired runner feel pretty excited to run through a cheering crowd for the last quarter mile. The race organizers are careful to announce every single person’s name that crosses the finish line, too.

As I finished and headed into the Broken Egg to meet my dad and eat as much bacon as possible, I thought about what a great race DXA2 would be for a first-time half-marathoner. The variety of people, scenic course, and excellent organization really kick it into the top tier of southeast Michigan halves. Hope to see you on the course next June!

Elizabeth Pearce is a Librarian at the AADL. This was her third Dexter-Ann Arbor Half Marathon.

For information on more races in the area, visit runmichigan.com.