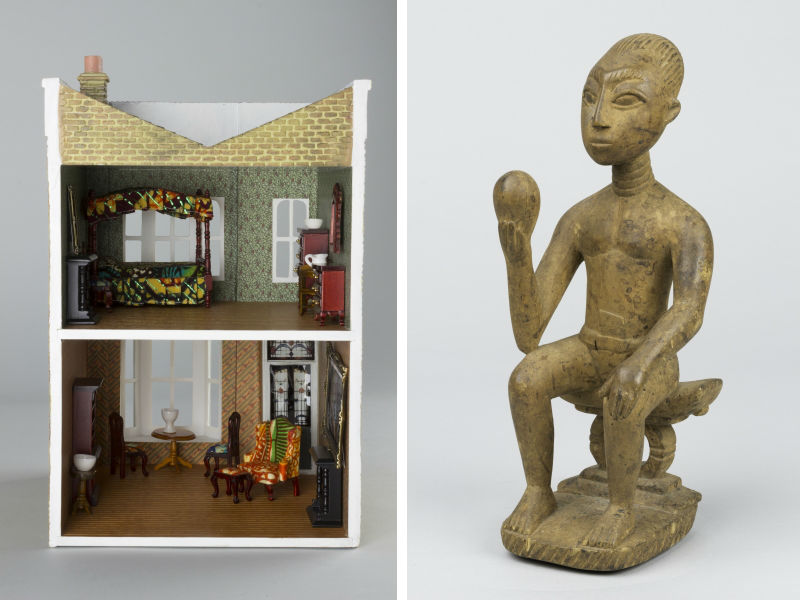 The red walls grabbed my attention as soon as I entered the exhibition and the large text on one begins: “For most historical African objects in museum collections, the artist’s name is unrecorded.”

The artists’ names were rarely recorded, because, as the curators of UMMA's Unrecorded: Reimagining Artist Identities in Africa point out, the objects were considered "artifacts" rather than "artworks."

Organized by Allison Martino, the Andrew W. Mellon Curatorial Fellow from 2016-2017 and Laura De Becker, Helmut and Candis Stern Associate Curator of African Art, the exhibition asks the viewer to question why these omissions are a common occurrence in museums. The 19th-century practice of “collecting significant objects to bring home” informed the Euro-American imagination through “the kinds of objects they acquired, as well as the information they chose to record.”

The dichotomy between "artifacts" and "artworks" in regard to "Western" art and "African" art came to be seen as a given. African artists “thus became associated with broad cultural styles and collective identities,” whereas Western art was seen as a result of “personal creativity and individual agency.” The 19th-century European collecting practices that framed the African creator as irrelevant to the object’s meaning are now seen to be faulty. While efforts are being done to retroactively attribute works to individuals, there is much work to be done. This can be seen in some of the works on display in the gallery, while others remain anonymous and may remain so forever.

The curators also ask how the history of African art impacts the collection and the display of contemporary African art. The curators explore this question through the inclusion of Yinka Shonibare and William Kentridge, global contemporary-art stars with ties to Nigeria and South Africa. Like most communities, the diverse cultures in the continent of Africa and its diasporas include artists creating functional objects for cultural use and tourist sales, but there is also a large population of highly trained artists participating in the global art world. Many African artists’ works are being collected and displayed in prominent museums.

In the gallery, there is a map of Africa, Europe, and the Mediterranean next to the initial wall text. Each object on display is shown corresponding to the location it was originally from. Shonibare currently lives in England, where he was born, but has ties to Nigeria and lived between both London and Nigeria. His work deals frequently with colonialism, race, class, and identity, executed in a broad range of media. One of the wall texts, titled “Away From Home” stands alone. Here, the curators discuss both Shonibare and Kentridge, two of the most well-known figures in the contemporary art world. (Notice, the contemporary art world, not the "African" art world.) Kentridge was born in Johannesburg, South Africa, and much of his work addresses his experiences of apartheid from the perspective of a white artist.

The question arises: Where and how should these objects be displayed? This is a fundamental issue with the problematic history of collecting practices. UMMA addresses this issue by highlighting the “confusion” that many galleries feel in trying to categorize African art, installing “a work by Yinka Shonibare -- one of the most well-known contemporary artists of African descent -- not in this exhibition space but instead in the Museum’s modern and contemporary gallery alongside his international contemporaries.” It seems obvious that a contemporary work would be housed alongside works dealing with similar issues, and from the same time period, particularly in light of the move toward categorizing art objects in relation to the decade or movement in which they are situated. But many museums still use geographic classifications, creating confusion around art engaging with global issues in both Africa and its diaspora.

The curators explain that both artists “transcend the geographic borders of Africa,” and their works, though very different from one another, seek to “break the constraints upon African artists to conform to certain historical expectations: that their work must address Africa, look ‘African,’ and be displayed and discussed with other African art, and that they be identified as ‘African artists.'” UMMA challenges this essentialization, placing Shonibare’s work in the contemporary art gallery, separate from the exhibition. Kentridge’s work, a print titled Skeleton of a Moose, is placed at the end of the red gallery space, which contains many unattributed works. After Kentridge’s print, another isolated wall text asks “Where do we display contemporary ‘African’ Art?”

Below the textual information, an arrow points to the contemporary gallery, where one must wander around to find Shonibare’s work, Untitled (Dollhouse). It's a Victorian-style townhouse, modeled after the artists’ own residence. The house includes “factory-printed fabrics,” which are described as “key materials across Shonibare’s work.” The textiles are known as “African wax-prints,” marketed by the Dutch in the 19th century to West Africa. The text accompanying the dollhouse reiterates the challenges of artists being labeled as African artists, “thereby conflating an artist’s identity with an entire continent.”

Unrecorded: Reimagining Artist Identities in Africa asks many questions that do not have straightforward answers, highlighting the importance of spaces such as these to question the status quo in museums. Does Shonibare’s dollhouse look different in the context of the contemporary art gallery? What would the impact be if Shonibare’s work was also displayed with the rest of the exhibit? What about Kentridge’s print, which is displayed along with the unattributed works?