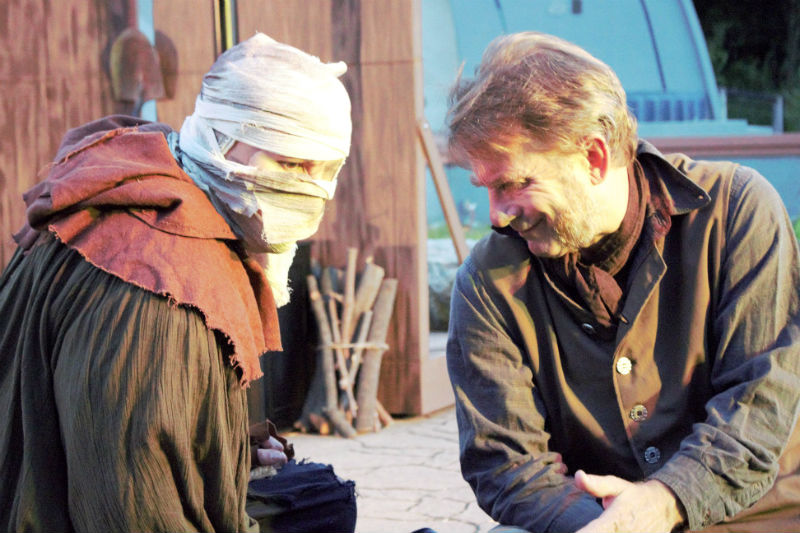 Meet me at the cemetary gates: The monster Anton (David Galido) and gravedigger Kurt (Robert Schorr) in Penny Seats' production of Joseph Zettelmaier’s The Gravedigger.

The story takes place in the 1700s, and begins as Victor Frankenstein (Daniel A. Helmer) is purchasing body parts from a drunk, limping gravedigger named Kurt (Robert Schorr) -- but this is merely a preface to the main story, which is focused on the creature Victor creates with these pieces.

This monster, who gives himself the name Anton (David Galido), seeks nothing but death in Kurt’s graveyard, but instead finds unexpected friendships -- both with Kurt and an outcast gypsy named Nadya (Annie Dilworth). By digging for Kurt by night, Anton starts to imagine, for the first time in his short life, how he might forge an existence that features both companionship and moments of joy. But when Victor comes looking to destroy Anton -- who, when immediately abandoned by his horrified maker at his “birth,” angrily murdered all the people Victor loved -- the two must each face the consequences of their actions, in the form of each other.

Penny Seats’ summer productions happen outdoors, in Ann Arbor’s West Park (in front of the band shell) -- and perhaps not surprisingly, some plays succeed more in this setting than others. The Gravedigger, particularly as night falls, works better than most. Yes, part of that is due to Tyler Chinn’s lovely lighting design (which obviously becomes more critical in the final scenes), and Will Myers’ sound design -- three cheers for good mics and a well-calibrated sound system, so we can hear the dialogue! -- but it’s also because, given the story’s historic horror vibe, The Gravedigger ends up achieving the feel of a ghost story told 'round the campfire. (Just remember to bring a blanket or jacket along; the temperature drops pretty dramatically with the sun.)

Helmer, who also designed the show’s solid fight choreography, is convincing as a regret- and rage-filled man who’s on a mission to erase his god-like act of hubris; and Dilworth conveys appealing warmth as a woman who still has the capacity for compassion, despite years of surviving on the margins of humanity.

But Galido and Schorr, and the relationship that builds between their characters, are the spine around which everything else is built. As the show progresses, Kurt confesses to Anton that he’d previously been a priest; however, a failed love affair with a married woman ended not only in tragedy but also in an exile from humanity that makes Kurt Anton’s best hope for sustained connection. Schorr’s Kurt is haunted by his past, but gradually, through teasing, talking with, and coming to love Anton, relocates what was good in himself. And Galido has perhaps the toughest role. For inevitably, Boris Karloff’s iconic, stiff cinematic depiction of Frankenstein’s monster looms over all re-imaginings of Shelley’s original tale; but Zettelmaier’s take is far more thoughtful and nuanced, so it demands a monster that’s more human, and thus more rattled by his own surprising and bizarre existence. Plus, he must perform with his face covered in rags during the play’s first half, upping the challenge level for an actor tenfold. Galido, who fittingly towers over most of his co-stars, strikes just the right balance, making Anton awkward, and quick to anger, but also palpably vulnerable in his earnest search for love and acceptance.

The Gravedigger’s really nicely executed costumes, props, and set dressing come courtesy of Ben Despard, and a great deal of credit goes to directors Glander and London for solving the logistic challenges of staging the play in an open, outdoor space. More than once, characters will appear from behind large rocks, or you’ll watch a character wander the path that leads behind the band shell -- and it will make enough sense in context so as to not be distracting. No small feat.

But perhaps the most impressive accomplishment is that of Zettelmaier’s script, which takes Shelley’s iconic story and miraculously builds something akin to Anton: an entirely new creation, with its own struggles and haunting questions, that’s drawn from that which lived before.