Both Sides Now: “See Through: Windows and Mirrors in Twentieth-Century Photography” at UMMA 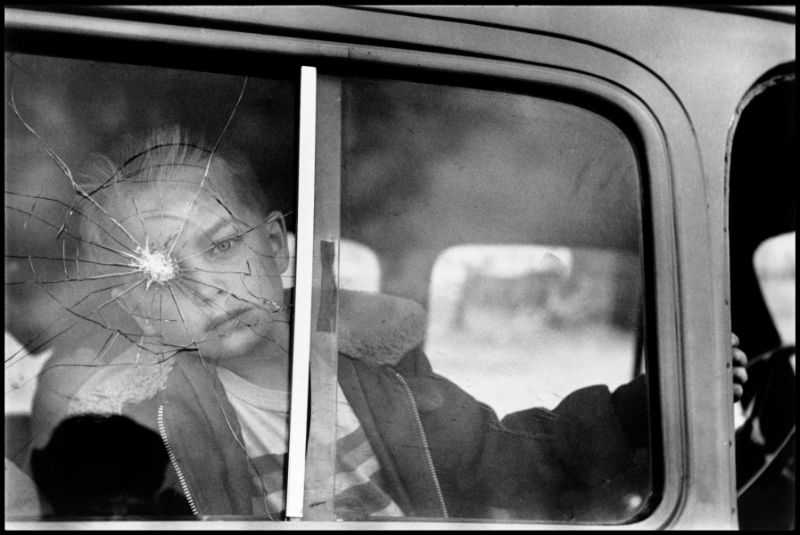 ​​​​​​See Through: Windows and Mirrors in Twentieth-Century Photography at the University of Michigan Museum of Art focuses on one of the most thought-provoking conundrums of art photography.

Curated by Jennifer Friess, the exhibit pivots on her observation that there’s a disjunct between “the choices photographers make when constructing their images and, in turn, the manner in which we -- as active viewers -- see [their] photographs.”

Drawing from one of the preeminent collections of photography in the country, Friess has crafted one of the most provocative exhibits of art photography to be mounted at the museum in this last quarter-century.

The art of crafting a photo with what might be called “a privileged moment” is a rare aesthetic. Obviously, most any of us can take a photograph -- point, click, shoot -- and anyone can stumble upon a superior composition now and again. But producing art photography isn’t quite that simple. It’s the practiced eye that preconditions the possibility of frequently discovering such moments.

Hence the first presupposition of Friess’ thesis about “the choices photographers make when constructing their images.”

Add the second condition of “seeing through” as Friess noted in a recent interview, “Each of these photographers purposefully disrupts the notion of depicting reality as each photograph features mirrors or windows. Each photograph is therefore a vignette contrasting exterior space with interior place.” 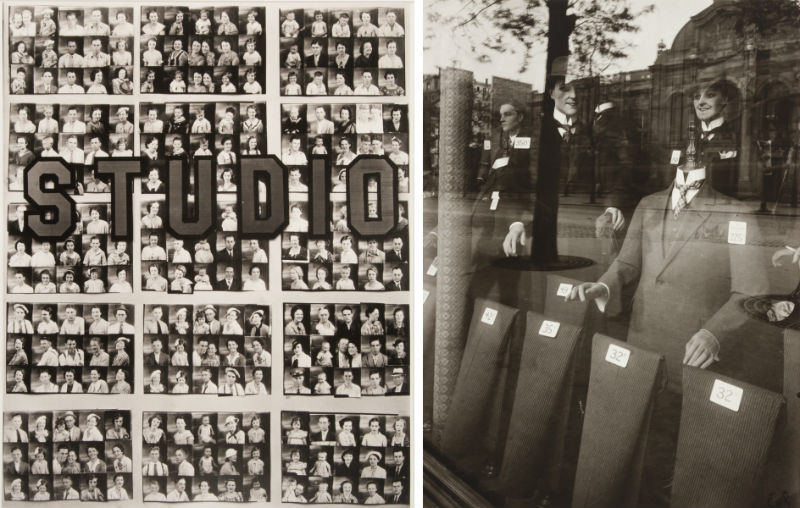 Atget was one of those seminal talents whose significance was only readily apparent after his death. For it was not enough that he was writ large one of the pioneers of art photography, but it was also due to his uncanny eye that he also profoundly shifted the course of 20th-century art by influencing Dada and Surreal art.

In particular, Atget’s 1925 (printed in 1974) gelatin silver print Men’s Fashions exemplifies both his intent to record his beloved Paris as the city underwent 20th-century modernization as well as feature the quiddities latently possible in art photography.

As Friess says in her exhibition gallery card:

Atget provides an opportunity for viewers to see in front of and behind the camera simultaneously. In this oblique view of a Parisian shop window, reflections of trees and architecture along the Avenue des Gobelins blend with a staged storefront tableau of dapperly dressed mannequins.

“By framing the photograph this way, Atget creates an eerie scene in which the mannequins, their bodies fragmented by opaque reflections of the city street, appear animate within the shadowy interior of the shop.

There’s not a whole lot more that can be added to this succinct description, but it is interesting to note the precision with which Atget worked. There’s a meticulous reflection of imagery in his photograph that creates an adroit recession of visual space where the storefront mannequins are given the appearance of life. And it’s the extradimensional refraction of the glass (with a contrapuntal shadowy figure in the photo’s windowpane foreground) that creates the surreal melding of internal and external space that marks the photograph an exceptional artwork.

Elliott Erwitt’s 1955 (printed 1980) gelatin silver print Cracked Glass with Boy -- Colorado, on the other hand, is all-American photography, all the time. But this is also only the beginning of the story.

As Friess observes, this psychologically pregnant photograph contrasts “the fragility of glass with the vulnerability of youth.” And yes it certainly does conjoin youth with fragility -- even as the temper of the composition is pure photojournalism verging on the border of social anthropology.

There’s an understated story taking place in Cracked Glass with Boy -- Colorado as the story is centered on the boy’s eyes -- both the eye we see as well as the one we don’t. Given the worn age of the vehicle, the shattered window, the boy’s nondescript clothing, and that fragmented glass itself, the model’s clearly of a rough and tumble economic station.

And as though this isn’t freight enough, there’s also something intensely haunting in his expression -- some undefinable that’s clearly wary. The boy’s gaze, therefore, is as much narrative as it is an image. He’s seemingly seen more than what he lets us see of him. And this subtle reserve is the genius of Erwitt’s photograph: There’s a life in this privileged moment whose tantalizing impenetrability compels our empathy as much as it draws our attention.

“Evans doubly references the act of constructing images,” says Friess in her gallery note. “In this photograph, a shop window is positioned parallel with the picture plane itself, rendering it nearly invisible. The word 'STUDIO' emblazoned across the upper register is one of the few clues alerting viewers to the window’s presence in front of a grid-like arrangement of bust-length studio portraits of local citizens.”

Quite well said. The photograph features 225 studio portraits set in 15 rows and columns as seen through an anyplace 20th-century studio shop window. As such, it’s about as full-fledged (yet, also not quite so paradoxically) Americana as ostensibly possible. Evans shows us a slice of Savannah, Ga., as the city saw itself in the mid-1930s portraiture form.

So the work is far too sincere to be wholly ironic -- yet, clearly enough, it’s too ironic to be completely sincere -- as Evans lets southern America see what its majority culture sees of itself through an every-person shop window. His Penny Picture Display is thus a bright contrast by clever compliment. One might say his window is our window into their world. And as Friess might tell us: It’s not too bad a wily effort for a single work of photography.

“See Through: Windows and Mirrors in Twentieth-Century Photography” runs through September 23 at the University of Michigan Museum of Art, 525 S. State St. The museum is open Tuesday-Saturday, 11 am-5 pm, and Sunday, 12-5 pm. For information, call 734-764.0395 or visit umma.umich.edu.