Dream Weavers: Chirp at Top of the Park 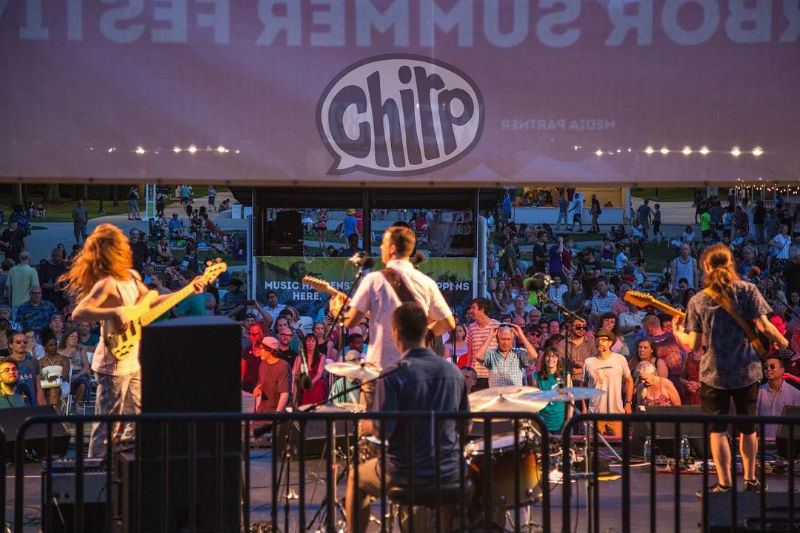 Ann Arbor jammers Chirp helped Top of the Park close its final weekend of the summer. Photo from facebook.com/chirpmusic.

I remember it; if you were a kid who grew up in Ann Arbor you do, too. The nights you spent in the hot summer air with cold lemonade, and the smell of the food trucks, the times you sat in the grass looking up at the sky, listening to bands on the main stage. It felt like a dream.

Top of the Park has been around now for 35 years and I've gone to it almost every year that I've lived in Ann Arbor. But this was the first time that I went alone to review a band. It's funny how being alone can sharpen your thinking and make you a keener observer.

By the time Chirp took the stage on June 30, the park had filled out. People stood or sat in chairs in front of the stage, while others sat in the grass or under the beer tent. Bassist Brian Long, guitarist-vocalist Jay Frydenlund, guitarist Ken Ball, and drummer John Gorine mix styles freely, touching on rock in their guitar work, jazz with the drum and bass solos, and soul through Frydenlund's voice.

Some of Chirp's songs go on for 10 minutes, and during those, I couldn't help but think of those great Greek poems like "The Odyssey" or "The Iliad," where characters aren't afraid to tell a good long story. I started to think of the guitar, bass, or drum solos as characters explaining the action, this is where I came from, this is where I am now. A guitar solo might reference a Doors or Zeppelin song, and then move forward to something completely original in the same way Odysseus might have told his story, I am from Ithaca, but I've traveled far and wide and this is what I know ....

I particularly liked the band's cover of Al Green's, "Love and Happiness.” A man behind me got it wrong and kept shouting "YES, SAM COOKE!" and even though he was wrong about the artist, I think Chirp would still be flattered. The band's cover focused heavily on the instrumental side of the song and less on Jay Frydenlund’s singing, which was almost a shame because he has such a rich and perfectly suited soul voice. But I liked that the band made the song distinctly theirs.

I read a book once where a young blind girl asked her friend what the color blue looked like. The friend replied that blue is the color you see before you go to sleep. I think Chirp might be the band that you hear when you start dreaming.