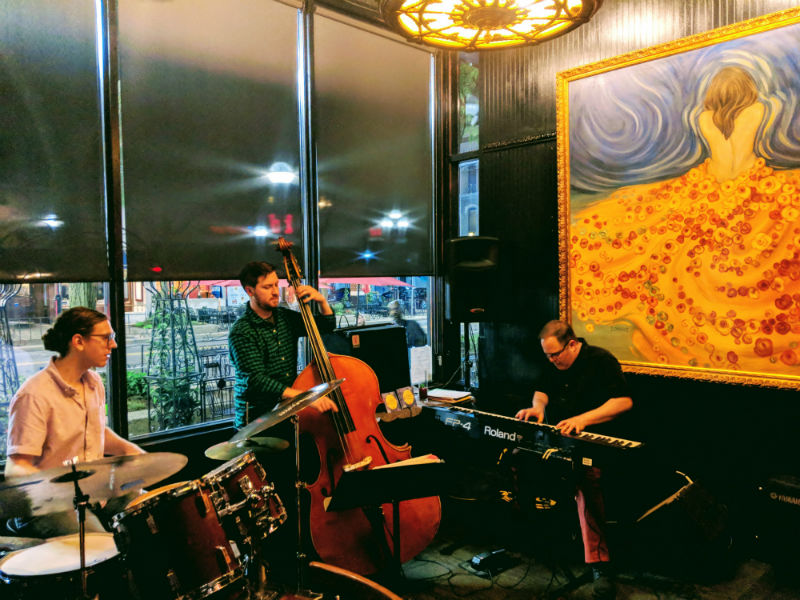 Monday night special: The Roe/Bickley/Kramer trio holds down a weekly gig at The Ravens Club in Ann Arbor. Photo by Christopher Porter.

The Ravens Club loves seasonal cocktails. Right now you can get the Donga Punch, As You Wish, Judge Holden, and The Filby Cocktail.

But come fall, the drinks will change with the leaves.

For the past year, though, at least one thing’s been constant at the club on 207 S. Main St. in Ann Arbor -- and I’m not talking about the 150 whiskeys on the menu. Every Monday night from 9 pm-12 am you can find the Rick Roe (keyboards), Rob Bickley (bass), and Jesse Kramer (drums) trio performing a mix of originals, jazz standards, and a whole lotta Thelonious Monk.

But the most intriguing part of the trio is its dedication to exploring Disney’s music.

Five of the songs on the group’s new CD, Heliosphere, are Disney tunes, with the other six coming from Roe. The trio will celebrate its release with a gig at Kerrytown Concert House on Saturday, July 14.

“Some of these tunes are really well known and it helps audiences who are new to the music,” Bickley says of the group’s love for House of Mouse music. “If you hear a tune you’re really familiar with, you can attend to some of the details we interweave into the rendition of it. It helps people feel comfortable going on the ride with us.”

But, Roe says, “It’s really about being attracted to certain tunes, not just because they’re Disney per se.”

Still, Roe has been exploring Disney’s music for a minute.

“When I was still living in New York, I was listening to Rick’s record, which had just come out, called Swing Theory,” Bickley says of the 2013 album. “He plays a couple tunes on that from Aladdin and “Part of Your World” [from The Little Mermaid]. I remember getting that record and it was just so swinging. [Bassist] Bob Hurst is on that, [drummer] Karriem Riggins. The way that Rick plays the music is so authentic and personal. [Playing Disney music] there’s a fine line -- it could be corny. But you have to commit to it, and I think we do a nice job of it.”

The group likes to explore the music of Alan Menken in particular and has three of his tunes on Heliosphere: “Belle” (Beauty and the Beast), “Colors of the Wind” (Pocahontas), and “I See the Light” (Tangled). The other two tunes are from Frozen, “Do You Want to Build a Snowman” and “For the First Time in Forever” by the husband-wife duo Kristen Anderson-Lopez and Robert Lopez.

“It’s similar to what Miles Davis did with ‘Someday My Prince Will Come’,” Roe says of the Snow White and the Seven Dwarfs tune, “and Coltrane did with “My Favorite Things,” which was a huge hit for him. People are so drawn in.”

Despite being a CD, Heliosphere is divided almost like the A- and B-side of a vinyl record, with Roe’s tunes prefacing the Disney songs.

“I had done something similar with my second recording I made back in 1996 called The Changeover, and I did six originals and six standards. It just seemed to be that my tunes go together rather than try to mix the menu. And the Disney ones all seemed to go together [on Heliosphere].”

Bickley adds, “I think we’re pretty happy with the A-side / B-side, but when we’re playing on the gig, we don’t really think of the Disney songs or the Alan Menken tunes any different that Cole Porter or Monk.”

The trio came to life when Kramer asked The Ravens Club if it would be interested in a standing Monday night gig. He was already playing weekly in the Heather Black Project, so the club said yes. But at this point, Kramer didn’t have a group in mind.

The drummer contacted Roe who then recommended Bickley, whom Kramer didn’t realize was back in town. They all go way back, too: all are Ann Arbor natives; Kramer and Bickley have known each other since middle school; Bickley was a student of Roe’s when the pianist taught at Michigan State University, where he worked for 10 years through 2011.

The three have the musical familiarity that only a standing gig can offer, and you can tell how much they enjoy performing together.

“I just really love playing with Rick,” Kramer says. “Playing with Rick was really challenging [at the start] but things were locking in and it felt really good.”

“Every week feels fresh and it’s a challenge,” Bickley says. “Part of the joy of having the weekly show, we get to bring in new material that’s fresh for us and for the audience, but it’s also high-stakes enough that it’s a fun challenge for us, it keeps us on our toes.”

Kramer adds, “With a gig like this, it’s very low pressure. A lot of people aren't necessarily coming to this place to listen to a three-hour concert. They’re drinking, talking to their friends, having a good time -- and enjoying the music, too. It really is a place where we can make some mistakes or try some new stuff. And then we get to do something like Kerrytown and they get to sit and hear great acoustics, no one’s talking, they can focus on the music ...”

“...and we can put on a really polished show because, basically, we’ve been rehearsing,” Kramer says.

But unlike most rehearsals, the Roe / Bickley / Kramer trio’s weekly “practice” is well-worth hearing. It’s an Ann Arbor tradition for all seasons.

Roe/Bickley/Kramer celebrates the release of "Heliosphere" at 8 pm on Saturday, July 14 at Kerrytown Concert House. You can catch the trio weekly at The Ravens Club from 9 pm-12 am.