Callie Feyen's "The Teacher Diaries: Romeo and Juliet" encourages kids to read in the internet age 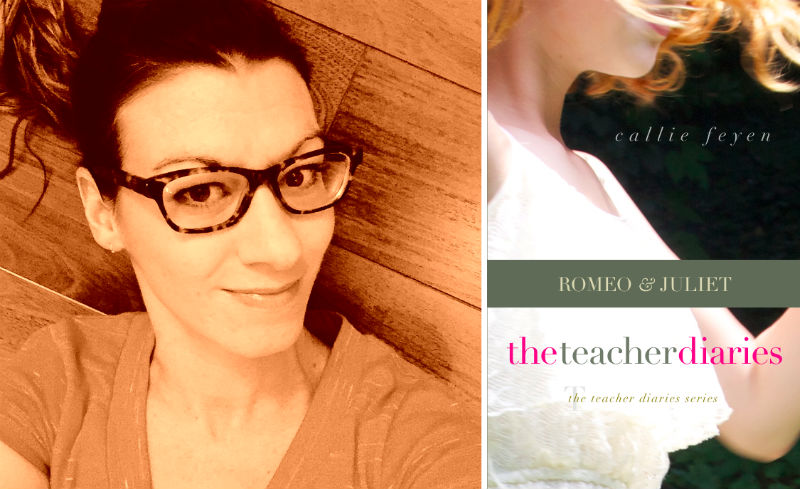 Callie Feyen's new book begins with a kiss. But the writing of said book began with an essay -- one she wasn’t particularly keen to write.

“My editor at [T.S. Poetry Press] asked me if I wanted to write about teaching Romeo and Juliet to eighth graders. But at the time I thought it would be too painful.”

The longtime middle school teacher felt that way after she found herself at a school where lesson plans were scripted and tightly monitored; teachers received reprimands for going “off script.” After years of creative lessons plans and multisensory activities, Feyen was frustrated by being locked down in a specific teaching style and writing the essay would make her "remember how I used to be able to teach.”

Feyen’s editor then suggested starting with an essay about the classroom experience; that essay ended up becoming the first chapter in The Teacher Diaries: Romeo and Juliet. The book details Feyen’s many years of teaching the Shakespeare classic to middle school students.

After the initial essay, Feyen “started writing a little bit more, following the Romeo and Juliet story. As I went along, I realized I could do dozens of essays based on my lesson plans. My editor looked at what I had and said, ‘I think we have a book!’”

As a teacher, Feyen strived to ensure that each student comprehended what he or she read. “Literacy is not only reading the material but truly understanding it. … You have to know who your students are and what you as a teacher bring to the table. I never taught the story the same to different classes -- you can’t be formulaic” if you want the students to love the literature.

Feyen drew on her own experiences as a young person both in the classroom and as an author. “Each chapter that I wrote reminded me of my own teenage years and that reinforced the need to make the story relevant to my students. The themes and constructs found in Romeo and Juliet are timely.”

Connecting students to a character in the play demonstrated relevance in today’s world. “Students tended to love Mercutio -- he says completely inappropriate things but is funny. Kids thought he was great and were devastated when he died.”

Feyen used Mercutio’s killing, and the other violence in the play, to illustrate a point. “I hoped that they would take this antiviolence message into their own lives. We talked about how horrible and vicious the murders were. Tybalt killed Mercutio -- the funny party boy -- because [Mercutio] was the wrong person, from the wrong side of the tracks. That made those characters real, the kids could see someone they knew or heard about. … Some connected it to the violence they saw in video games.”

Feyen used video games and technology in other ways. “I would ask what sorts of games Mercutio and Romeo might play, what would their Twitter and Instagram names be, what hashtags would they use. We would read scenes and then distill the action into a tweet.”

Hands-on activities also added to the students’ experience. Feyen “made sure they always had a physical book in their hands so that they could take notes, write questions. I had them write longhand as much as possible. We would study some of the more difficult scenes and then use something tactile, such as Play-Doh, to re-create what we had read.”

Feyen is a reading specialist for at-risk elementary students in Ypsilanti Community Schools and she's writing two more Teacher Diaries for The Hobbit and To Kill a Mockingbird.

“Writing this book showed me what I love about teaching," Feyen said. "Kids have so many distractions -- social media, peer pressure -- we are fighting a tsunami to get them to read but it’s so important. Reading literature like Romeo and Juliet can shape who we are and impact the kind of adult we become.”

Callie Feyen reads from her debut book, "The Teacher Diaries: Romeo and Juliet," at Literati on Wednesday, August 8 at 7 pm.